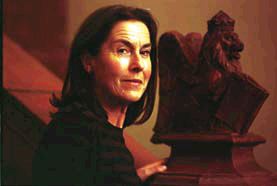 Historian Dagmar Barnouw writes: “I have approached the enduring ‘German question,’ which was first posed in reaction to views of Germany in 1945, as a question of perception and representation.”

For half a century, the German people have struggled to come to terms with the atrocities committed by the Nazi regime during World War II.

Were they to blame? Should ordinary citizens have known about and done something to stop the war crimes being committed in the concentration camps? Should they confess some sort of collective guilt?

In her new book, Germany 1945: Views of War and Violence (Indiana University Press, 1996), Dagmar Barnouw, professor of German and comparative literature, takes a fresh look at the issue of German guilt and remorse, and tackles the so-called “German question” using documentary photographs as the launch point.

“The question was then and still is: How could this possibly have happened?” Barnouw said. “When the Allies came into the concentration camps and saw the piles of corpses, they were understandably appalled and set out to confront the German population. The Americans wanted them [the German people] to say, ‘Yes, that’s what we did. We are guilty.’ “

Documentary photographs – many previously unpublished – as well as spoken and written documentation are the focus of Barnouw’s study of postwar Germany and the battle over history, memory and the German past. The photographs, many from the U.S. Army Signal Corps photography units, were found by Barnouw in the National Archives, the U.S. Holocaust Museum and the Hoover Institution at Stanford University, among other archives.

“I have approached the enduring ‘German question,’ which was first posed in reaction to views of Germany in 1945, as a question of perception and representation,” she writes.

Germany 1945 is a thorough sojourn through this intellectual debate, which is as alive today in Germany as it was 50 years ago. For instance, two years ago, a group of German nationalists published an appeal in a German newspaper called “Against Forgetting.” Creating a furor, the appeal stated that the end of World War II marked the beginning of division in Germany rather than the liberation of the German nation. The message was that Germans, too, were victims of a total war.

Though not sharing nationalist claims, Barnouw’s book begins with this assumption and builds an argument that is even more provocative. “The scenario has been that Germans got what they deserved,” Barnouw said. “But I’m assuming that of course German civilians and draftees were at the mercy of this war and were, in that sense, victims. This was a war of total destruction with a different concept of the chain of order.”

Barnouw’s investigation of the photographic record, as well as journals written by German citizens after the war, shows that raging debates about the “German question” have overlooked the actual conditions in which postwar German memory was first forged.

Barnouw examined hundreds of pictures of concentration camps, women, children, battered army soldiers and devastated cities to argue that Allied photographers saw what they expected to see: a sullen and resentful people. Photographs show Germans, brought to the concentration camps by the Allied troops, viewing Nazi atrocities in order to accept and repent their complicity in these acts. These pictures were published in Life and mounted for a traveling exhibition, “Lest We Forget.” “These images were to shape Allied and German perceptions of the German collective guilt, perceptions that are still powerfully present half a century later,” Barnouw writes.

Barnouw contends that photographs taken by Allied photographers – especially American photographers – tended to depict Germans, often described as “stone-faced,” as immune to the horrors of the concentration camps. She stresses that the Allied photographers’ aim was to demonstrate through the seemingly objective eye of the camera that the Germans got what they deserved. This message was brought home even more decidedly through captions printed next to the photographs in Life and other periodicals.

In one minor but instructive example, Barnouw shows a cover photo of Life (May 7, 1945) portraying three German men, one an adolescent and the others elderly, under the title “The German People.” The caption for this image of German civilians in defeat states, “These faces are unhappy but hard and arrogant. Not yet had these Germans … been forced to see the atrocities … committed in their name.”

Barnouw contends that the message underlying such words and pictures conveys the view that “all German civilians should not be perceived as victims of war but as guilty aggressors.”

Barnouw uses such examples to illustrate the idea that in certain cases, there is an ambiguous and misleading symbiotic relationship between a photographic image and the caption. She implies that these words and images, as well as memories relayed through storytelling of the horrors of the Holocaust, create a distorted view of history. While she is not diminishing the importance of these stories, they need to be balanced with documented historical accounts, she said.

“It was an absolute military and moral victory that put into place the scenario we still have: total evil vs. total good, collective guilt and collective innocence,” she said. “From the very beginning of this terrible war, the memory was exclusively focused on the victims of Germany, and Germans were explicitly prevented from dealing with their own experiences.”

Barnouw said the Germans’ reactions could hardly have met their victors’ expectations. They had been uprooted from communities where their families had lived for centuries, traumatized by the bombing and destruction of their cities and concerned with their own survival. As a result, “Most of them could not cope with the issue of collective guilt over the Nazi actions,” she said, “even though the elites tried to do so and there was much discussion of German guilt in newspapers and journals, especially in 1946 and 1947.”

While Barnouw acknowledges her thesis is difficult for Americans to consider, she builds her argument logically, with thorough documentation, as the book progresses. As a historian, Barnouw is also arguing for a more sober and critical historiographical inquiry, and for lifting the taboo that has prevented open discussion of these issues.

Furthermore, her intent is to show Germany in 1945 from different points of view – the German as well as the American and the British, and the differences within each group.

“Using these multiple perspectives, I am trying to get back to how the war and its aftermath was experienced by the German people,” Barnouw said. “What did it feel like to be a German at that time? And how can these different views of Germany in 1945 help us to develop a more thoughtful understanding of World War II?”

World War II and Its Aftermath Viewed Through Many Lenses