Over the year and a half since its launch, the Safe Communities Institute at the USC Price School of Public Policy has hosted 160 representatives from more than 50 countries as part of the International Visitor Leadership Program run by the U.S. State Department. 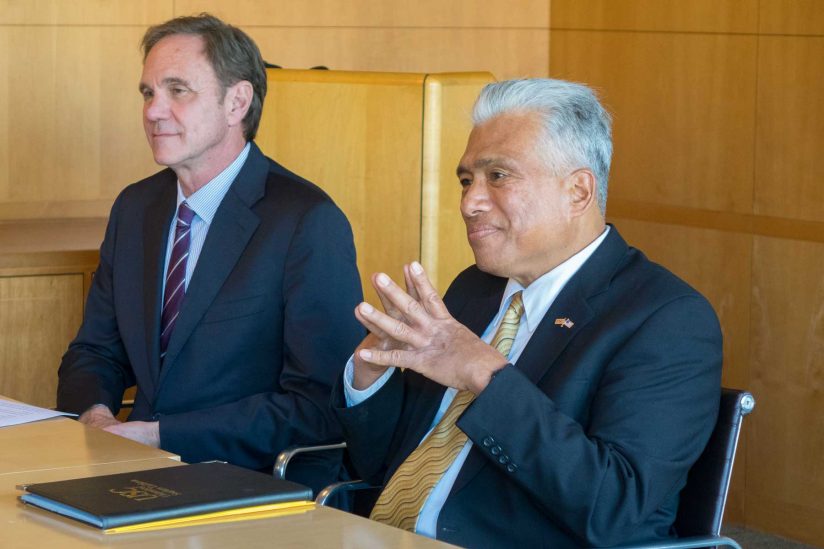 “Every country has a uniqueness in the way they are dealing with problems and brings a different perspective,” said SCI Director Frank Quiambao. “There really aren’t a lot of people throughout the world working on this. We have to get people to come together so that we can leverage what we’re doing and combine data for research opportunities, and I think these meetings help us do that.”

USC Price Dean Jack H. Knott welcomed the group on Feb. 16, stressing the importance of having these meetings of the minds across cultures to make a difference.

“We hope this isn’t just a one-time event, but that this establishes a sort of network of relationships,” Knott said. “The goal would be for you also to be connected in some ways to the other groups that have come through so we create a broad international network. This kind of complex challenge that we face really requires this kind of collaboration.”

Erroll Southers, director of homegrown violent extremism studies at SCI, focused his presentation on how, since 9/11, the majority of attacks and police officer shootings by extremists in the United States had not been perpetuated by Muslim extremists. White supremacists and anti-government extremists totaled 83 percent of shootings at officers since 2009.

“With all due respect to the executive order that’s in place right now, anybody who’s a refugee in America who has been vetted by the system since 9/11 has never been involved in a terrorist incident in this country,” Southers added. “So the system works.”

The visitors expressed that it was refreshing to get the comprehensive, whole-of-community viewpoint on the many different aspects of extremism at SCI, as opposed to the Muslim extremist focus.

“It was overwhelmingly interesting because of the perspective and data they gave us on the U.S., because we know of similar tendencies on the balance between extreme rightist violent extremism and religiously inspired violent extremism in Europe,” said Alexander Van Leuven, a counter-radicalization coordinator on the local level in Belgium. “It’s nice to see the tendencies here and that we have an ally here we can work with in the future.”