A USC Thornton School of Music violinist and cellist placed first and third, respectively, at the national Sphinx Competition for classical strings players of color.

Annelle Gregory, a senior and violinist who studies with Glenn Dicterow, won the Robert Frederick Smith Prize of $50,000 and a custom-made gold-tipped bow. Gabriel Martins, a sophomore and cellist who studies with Ralph Kirshbaum, placed third and received $10,000. It was his first appearance at the contest, which took place in Detroit.

Both students played at Detroit’s Orchestra Hall with the Sphinx Symphony Orchestra, an ensemble comprised of musicians of color from symphony orchestras across the country.

“We are so proud of Annelle and Gabriel,” said Robert Cutietta, dean of USC Thornton. “This is emblematic of the importance of diversity at USC.”

This was the 20th annual competition, and it marked the fifth time that Gregory, of San Diego, had been at least a semifinalist at the event. She placed third two different years in the junior division and had previously placed third and second in the senior division.

Gregory said Dicterow was following her performance this year via the live stream. When she called him afterward, he told her, “ ‘Bravissima! Beautiful playing!’” she recalled. “He told me how proud he was of me and was so happy that I won.” 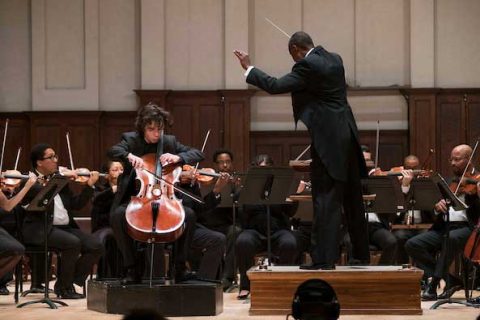 Gregory said the cash prize will help her focus on establishing a solo career and help pay for application fees and travel to other competitions.

“I’ve always been an individual worker, focusing on my interpretation of the music and I see myself as a soloist,” she said.

She is already on her way, having just released a CD on a professional label, Bridge Records. Rachmaninoff: Complete Works and Transcription for Violin and Piano was recorded with Alexander Sinchuk ’14, who studied with Daniel Pollack. (Gregory and Sinchuk performed together at Carnegie Hall last November.)

Gregory played the first movement of the Sibelius Violin Concerto in D Minor (as did the other finalists) to win the top prize.

Martins, of Bloomington, Ind., said his teacher, Kirshbaum, also was in California watching him compete via the livestream.

“He was very proud, of course,” he said.

Martins said he will probably use some of his winnings to purchase a new bow for his cello. Bows can cost anywhere from $50 to $100,000 and can add different tone projections and articulation to a cellist’s sound.

“It was a real pleasure to play at Orchestra Hall, where the Detroit Symphony plays,” he said. “The acoustics were fantastic. The competition itself was a great opportunity.”

This was not the first competition where Martins was a winner. He won last year’s Strings Concerto Competition at USC Thornton, and he will be playing a solo concerto by Paul Hindemith at USC Thornton Symphony’s Concerto Night at Bovard Auditorium on Feb. 24.

The Detroit-based Sphinx Organization aims to transform lives through diversity in the arts. Its education and access initiative includes a beginning violin program, an intensive summer academy and a music curriculum for schools. Its artistic development area includes the Sphinx Competition and a fund that awards scholarships and money for fine instruments.

The organization’s performing artists mission has several components, including the Sphinx Symphony Orchestra, a global scholars program, a soloist program and the Caralyst and Harlem quartets. Its other initiative is arts leadership, which includes a career marketplace connecting musicians of color and the industry, as well as Sphinx Medals of Excellence that identify extraordinary artists.

Undergrads sing and perform on stage under the guidance of grad students who shape their work.

Most of the working professionals around Los Angeles received their degrees from the USC music school.