USC President C. L. Max Nikias used his annual State of the University address to voice strong support for the university’s diverse and inclusive faculty and student body and to announce two game-changing initiatives: a new hospital at the Health Sciences Campus and an ambitious extension of the highly successful Campaign for USC.

In speeches to faculty and staff at the Health Sciences Campus on Feb. 14 and Town and Gown on the University Park Campus on Feb. 15, Nikias said these two new initiatives would dramatically advance USC’s consequential work in the world, and were the appropriate next steps for a university whose academic reputation has soared in recent years.

“I believe it would be a big mistake to rest on our laurels,” Nikias said, praising the university community, from influential faculty and diverse students to talented researchers and outstanding athletes. “This is the moment to accelerate our efforts even more.”

In the context of recent events, Nikias recounted USC’s history as an institution of inclusion. “We were global before it became the fashion or the new reality,” he said.

Nikias acknowledged that two American values — the security of Americans and the country’s openness to people of the world — have lately come into conflict but said USC’s spirit of inclusion would not change.

“We honor efforts to keep our nation safe. However, we will champion the inclusiveness and openness that set our nation and its top universities apart,” he said.

“Our university was founded with a commitment to international diversity,” he said.

“And our university has been nourished to greatness … by the rich exchange of ideas spanning a limitless range of religious viewpoints.

“If we lose that inclusive spirit, we lose our souls and our selves.” 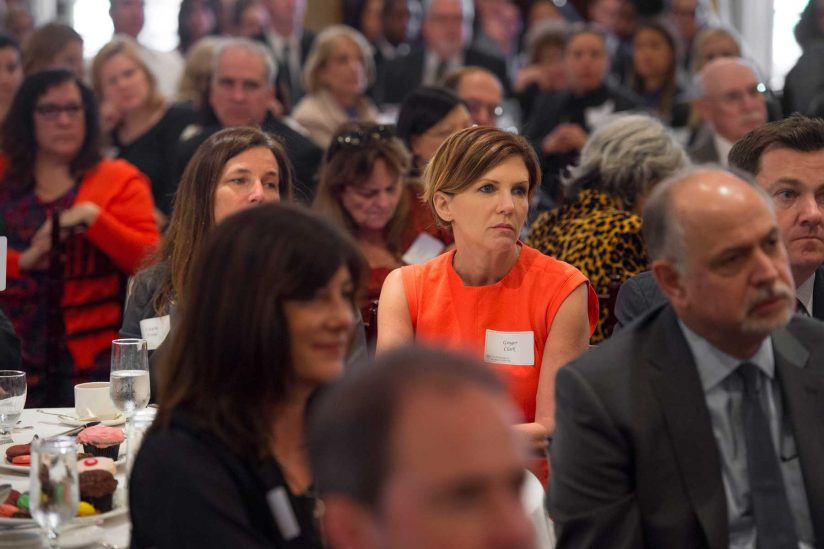 Faculty members listen to the State of the University address at Town and Gown. (USC Photo/Gus Ruelas)

Nikias remarked that the successes brought about by this scholarly community have not gone unnoticed, with USC placing 15th in The Wall Street Journal and Times of Higher Education ranking of the nation’s universities. “What especially gratified me is that, among the top 25 research universities, USC was tied for second in faculty and student diversity, alongside Columbia University,” he said.

And he pointed out the unique position of the nation’s top research universities in today’s world.

“There is a reason that USC and America’s leading research universities remain the envy of the world, and the last unrivaled asset of our nation: We have protected and encouraged a singular set of core academic values — including intellectual freedom, an unfettered search for truth, collaboration, diversity, inclusion, openness and gender equality.”

As Nikias praised the university’s outstanding student body, he challenged his university colleagues to increase teacher-student interaction, encourage risk-taking and do even more to help graduates find the very best career opportunities in an ever-changing job landscape.

“The Trojan Family network is indeed legendary,” he said. “But moving forward we need to make serious investments in job placement, in each one of our schools, especially as the career landscape morphs rapidly.”

The Campaign for USC

Supporting the university’s manifold and increasing ambitions, the president also announced the extension through Dec. 31, 2021, of the Campaign for USC, which so far has raised nearly $6 billion for student scholarships, academic priorities and new facilities. The campaign was the most ambitious in the history of American higher education when it was announced in 2011 and has generated tremendous momentum in the intervening years.

“While we have an ambitious vision for USC’s future, let’s remember that our dreams have a deadline,” Nikias said. “Let us continue gathering the resources to make them a reality.”

Nikias noted the variety of donations that have supported the campaign:

And he pointed out that in annual giving, 42 percent of USC undergraduate alumni are active donors — a higher rate than at any other premier university, public or private.

He also noted the many new facilities that have opened over the last six years, which have added more than 30 percent more square footage of academic and residential space on both campuses. This new development includes the massive USC Village, which will transform the landscape of south Los Angeles while adding 2,600 new beds for undergraduates. “It will be the envy of American higher education,” Nikias said of USC Village.

In response to the significant growth and ascent of USC’s medical enterprise, Keck Medicine of USC, Nikias also announced that planning has begun for fundraising and construction of a new hospital next to the current Keck Hospital of USC. The state-of-the-art facility will add operating rooms, intensive care units and cancer patient programs to serve the most seriously ill patients.

“It will make a statement that we are the destination to treat the very sickest patients,” Nikias said, adding that he expects to finalize the planning process for the new hospital quickly.

Work is advancing meanwhile to establish a biotechnology park directly adjacent to the Health Sciences Campus, where county yards are currently located. The park is expected to spur research breakthroughs, accelerate new businesses and create thousands of construction and permanent jobs.

Between the new hospital and the proposed Biotech Park, strengthened partnerships with Children’s Hospital Los Angeles and Los Angeles County + USC Medical Center, and creating a patient experience second to none, “USC can become the biggest and most influential health system in Southern California,” Nikias said.

He noted that the Keck School of Medicine of USC has made close to 100 key faculty hires in recent years — many of them leading figures in their fields. Medical student quality and diversity have reached new highs: Underrepresented minorities make up nearly a quarter of the entering class, and more than half are women.

The clinical mission has demonstrated similar success. USC’s patient care revenues have more than quadrupled in the last six years to more than $1.5 billion. And Keck Hospital now has the highest acuity rate in the U.S., meaning USC doctors and their teams provide care for the most difficult cases in the country.

“We are building the medical enterprise of tomorrow,” Nikias said. “We have opportunities and duties to guide a human health care renaissance. But we must begin serious planning for our future.”

State of the University: ‘If we lose an inclusive spirit, we lose our souls and our selves’