Ever since she worked for a state-level agency before attending graduate school, USC Price Assistant Professor Pamela McCann has been intrigued by when and why Congress chooses to delegate to the states for implementation of federal policy.

In her new book The Federal Design Dilemma: Congress and Intergovernmental Delegation (Cambridge University Press), McCann uncovered the partisanship at play when individual lawmakers determine whether to decentralize to states.

The book culminates a project McCann began as her dissertation at the University of Michigan. It addresses two major questions: First, what does intergovernmental delegation within and across policies look like? Second, under what conditions do national legislators choose to delegate more or less responsibility to the states?

“National policies are implemented at least in part by states, but we don’t have a good idea of when it happens,” McCann said. “Are they random, spur-of-the-moment decisions? Is it based on policy type or when there’s a higher federal deficit? This book was meant to understand more about that.”

The amount of responsibility allocated to states can be crucial in policies related to topics such as health, education, the environment, transportation and financial regulations. Implementation by states versus a national executive branch agency will result in differences in policy outcomes. 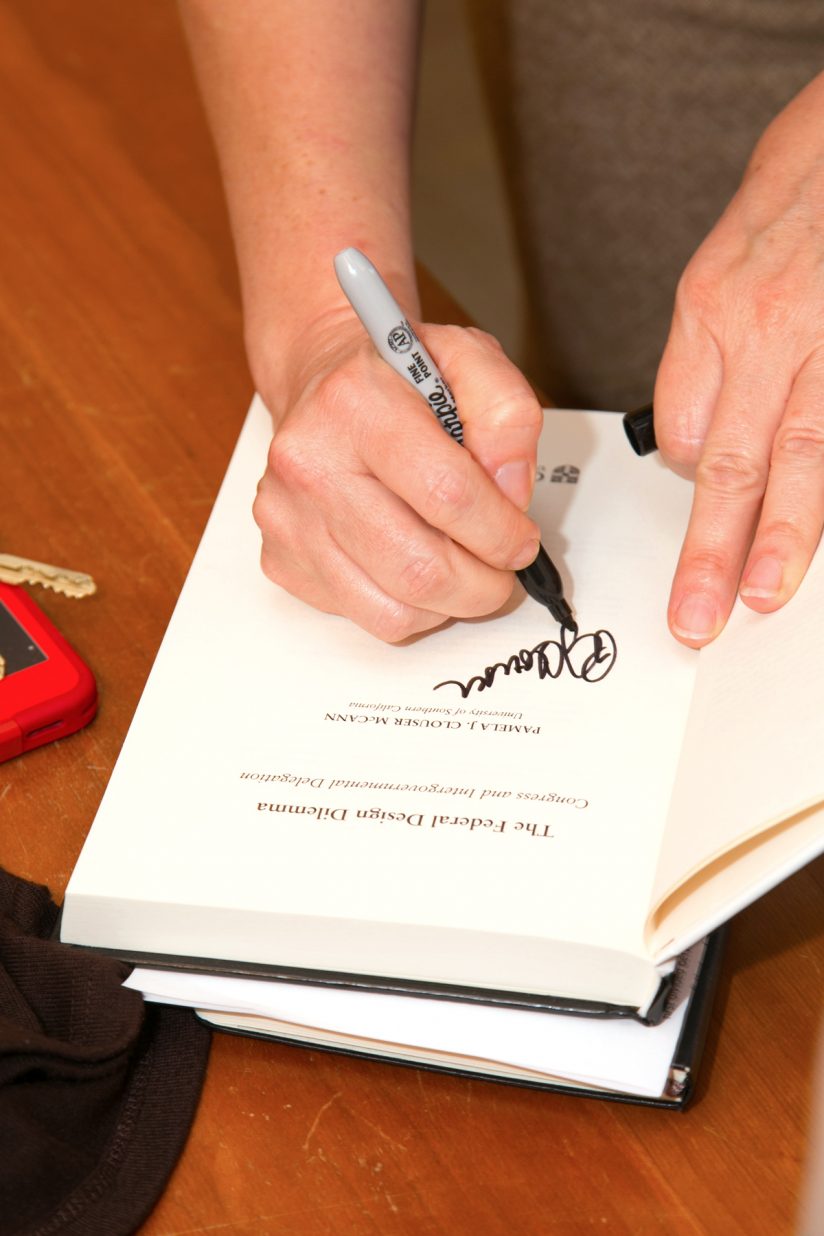 McCann compiled the first comprehensive dataset of whether and when laws delegate responsibility to the states, analyzing 199 significant federal laws passed from 1973 to 2010. She found that states were involved in implementing 80 percent of them.

The common perception is that Republicans prefer to devolve authority to the states and Democrats prefer to centralize power with the federal government, but McCann found this not to be the case.

She identified the main factor in the federal design dilemma to be how an individual legislator’s party affiliation lined up with the U.S. president and their state governor. For both Republicans and Democrats, members of Congress will look to decentralize a law when they are from the same party as their governor but not the president or centralize when the opposite is the case.

“In crafting and voting for legislation, individual legislators have the potential to give their governor and other state-level politicians power over what national policy might look like,” McCann said.

Analysis of the Affordable Care Act, as health policies include a variety of delegation choices, provided an in-depth case study of intergovernmental delegation. Democrats, under a Democratic president, preferred centralization. An investigation of the No Child Left Behind Act passed under President George W. Bush provided another example of what happens under a Republican president.

“Republicans from states with Republican governors were OK with either decentralization or centralization,” McCann said. “They were indifferent between the two, so there were other parts of the policy that interested them more, such as adding more grants for their district.”

McCann noted that, to her knowledge, the book is the first theoretical and empirical investigation of national legislators’ individual-level federal design choices. Previous literature overlooked that these decisions are strategic.

As a result of the research, McCann suggested that policy analysts should consider not just the efficiency of state or national control over policy implementation, but also the context of national and state partisan preferences and electoral uncertainty when designing programs and using policy tools.

“The people who matter a lot are the members of Congress who are pivotal in each chamber,” McCann said. “Concerned constituents may want to pay attention to how lawmakers vote in the House and Senate and make suggestions about who is responsible for implementing policy as it’s written and being debated.”

With President Trump’s lack of policy experience and the uncertainty surrounding how he will lead, legislative choices regarding intergovernmental delegation might take on added importance.

“It will be interesting to see if there are Republicans who prefer to decentralize rather than centralize under the Trump presidency,” McCann said. “Some Republican members of Congress might be closer to their Democratic governor than they are to Trump.”

A presidential transition: How the new team members work with the government ‘lifers’

USC’s William Resh, an expert on public management, looks at what’s going on in Washington.

Journalist Mara Liasson looks at politics in the Trump presidency

The NPR correspondent focuses on what we can expect from a leader who does the unexpected.

When and why Congress chooses to delegate federal policy