The benefits of globalization and the values that bind the U.K. and the U.S. took center stage as David Cameron, former prime minister of the U.K., visited USC on Thursday. 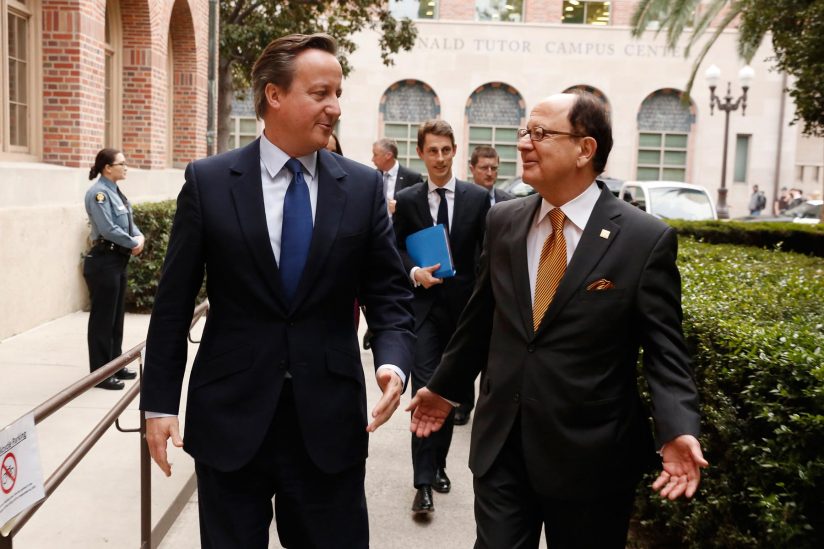 “He pushed through welfare reform, reduced the number of people living in poverty, and helped create more than 1.5 million new jobs,” Nikias said. “He introduced a national living wage, won passage of gay rights legislation, and won a national referendum to keep Scotland part of the United Kingdom.

“What Mr. Cameron achieved between 2010 and 2016 was nothing short of astonishing,” Nikias added. “He did it with enchanting grace, scholarly charm and a courageous heart.”

Still, during Cameron’s tenure voters approved the Brexit measure to leave the European Union. Though Cameron, one of Great Britain’s youngest and most popular prime ministers, wanted Britain to remain in the EU, he gave perspective on how the government now needs to negotiate a deal to safeguard the benefits of membership, international trade and cooperation while not being full members.

Cameron answered questions posed by moderator Jacob Soll, a professor of history and accounting for the USC Dornsife College of Letters, Arts and Sciences and the Leventhal School of Accounting, and fielded questions from the audience.

Recognizing the rising tide of populism in Great Britain and the United States, Cameron called for a “course correction” to acknowledge those who have been economically and culturally left behind, while still holding dear the values of both countries.

Soll asked for Cameron’s advice to students: ”We have to talk to young people about their careers. What do you tell them?”

Even with all the concerns around the world, Cameron remained optimistic and encouraged young people to safeguard common values and enter public service.

The first thing is to have confidence and optimism that we are capable of cracking the problems in the world.

“The first thing is to have confidence and optimism that we are capable of cracking the problems in the world,” Cameron said. “I have optimism and confidence in the things that are going on right now,” he said. “We are creating more jobs, but the key is training our young people to do the jobs that will be available in the future.”

Cameron’s visit to USC came after a tumultuous two weeks in the United States after President Donald Trump’s inauguration.

Cameron talked about the threat of Islamist extremism and said it is important for leaders not to generalize Muslims as extremists, or implement policies that may drive more people to become extremists.

“There is a small minority that are trying to hijack and convert this religion,” he said. “If we make the mistake of thinking we are in a conflict with Islam, we’re doing the terrorists’ job for them.”

Cameron is now president of Alzheimer’s Research U.K., a charity dedicated to finding a cure and treatments for the memory-erasing disease. It extends his history with supporting medical research and initiatives throughout his political career.

In the end, Cameron emphasized the importance of the special relationship between Great Britain and the United States. By guarding shared values — freedom, tolerance, justice — our two countries will continue to be great, he said.

Britain elects to leave the European experiment—now what?

USC Dornsife faculty reflect on Britain’s decision to leave the European Union in a historic vote that triggered financial turmoil.

The California native believes the country is at a crossroads: It could boast a strong economy or be divided by fear and prejudice.