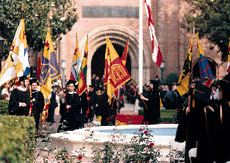 Pomp and circumstance made their traditional springtime appearance on campus as Commencement ’97 got underway.

THE WORLD’S FIRST broadcast of a commencement ceremony over the Internet helped to make USC’s Commencement ’97 the most widely viewed in the university’s history.
More than 3,000 viewers from around the world watched the live Webcast during the morning of the commencement, with 140 people visiting the site simultaneously at peak times. Among them was co-salutatorian William Hubbard, who watched from a computer at Shaker Heights High School in Shaker Heights, Ohio.
The commencement footage, still online at https://www.usc.edu/go/webcast, continues to attract about 400 Web surfers a day, totaling more than 10,000 viewers so far.
Some schools, including USC, have previously offered still-video images and speech texts via the Internet. Others have broadcast their ceremonies over traditional electronic media. But the Webcast of the graduation of the Class of 1997 was the most sophisticated effort of its type yet attempted.
“The Webcast allowed members of the Trojan Family all over the world to experience the ceremony,” says Jerry Dean Campbell, chief information officer and dean of university libraries. “It’s a perfect example of the Internet’s unique ability to bring people together.”

ON CAMPUS, A CROWD of 25,000 heard commencement speaker Jack Kemp offer self-deprecating anecdotes about his careers in politics and professional football, a news-making policy pronouncement and a call to “put an end to that persistent strain of hate and fear in our midst.”
The 1996 vice presidential candidate and former Buffalo Bills quarterback listed several areas of “great challenge” today.
“One is the calling of civic responsibility, not only to our communities, not only to our country, but to the whole world,” he said.
Kemp called for building global security by giving President Clinton fast-track authority to negotiate a free-trade zone from Canada to South America – a position that prompted a story in the Los Angeles Times speculating on Kemp’s candidacy for president in the year 2000.
Another challenge, he pointed out, is inner cities. “We cannot preach democracy in Eastern Europe if we are not making it work in East L.A.,” Kemp said. “We cannot tell South Africa it will work there if it’s not working in South-Central Los Angeles.”
As our greatest challenge, he cited the new millennium. “As Tony Blair said [to] the House of Commons, ‘We must use the next thousand days to prepare for the next thousand years.’ ”

KEMP ALSO REFERRED several times to valedictorian Jing Selia Chen – born in China’s Jianxi province – as an example of the multicultural nature of the American dream.
“Jing Chen reminds us that our dream is not American at all,” Kemp said. “It is Chinese and Asian, it is Latino and Hispanic, it is African and European and Eastern European, it is the free universe – and you are graduating in the most exciting time in the history of the world.”
In her address, Chen traced her own personal growth as a USC student, including her change of major from computer engineering to biomedical engineering in preparation for a medical degree.
“We face a complex and changing society,” she said. “The knowledge we gained in the classrooms and from the textbooks is not enough to prepare us for the new century. Much of what we are learning will be outdated in 10 or 20 years.
“We have prepared for such challenges by expanding our learning experience beyond the walls of classrooms. We gained social and interpersonal skills through working with our peers in the school as well as surrounding communities.
“As we gather here today, all of us harbor dreams that reflect whom we wish to become and what we want to accomplish,” Chen concluded. “To make these visions a reality, we must blend our skills with ambition – by that, I mean the courage to reach for our highest aspirations and to desire what is not yet possible.”

USC PRESIDENT Steven B. Sample praised students for their volunteer efforts in the community and urged them to continue. “Roughly 60 percent of you have participated in public service here at USC, which is a higher figure than that of any university of which I’m aware,” he said.
“Our mission statement calls on us not only to teach knowledge and skills to our students, but to help each one acquire wisdom and insight, love of truth and beauty, moral discernment, understanding of self, and respect and appreciation for others,” Sample said.
“Those of you who have been volunteers know that in giving yourselves in service to others you have been helped in acquiring these special virtues. May you do so even more in the years ahead, thereby bringing even greater honor to the Trojan Family.”