At 7 months old, Donovan Daniels of Westminster may not understand for some time just how serious his medical condition, biliary atresia, really is. It may be years before he knows he was the 300th pediatric liver transplant ever performed by doctors at Children’s Hospital Los Angeles and Keck Medicine of USC. But one day he’ll know his father Dejon Daniels went under the knife so that a portion of dad’s liver could help him live a longer, healthier life.

In the meantime, Donovan’s mother Jessica Valdepeña and Daniels got a glimpse of what that life might look like, thanks to a meeting with a young woman named Lydia Hand. 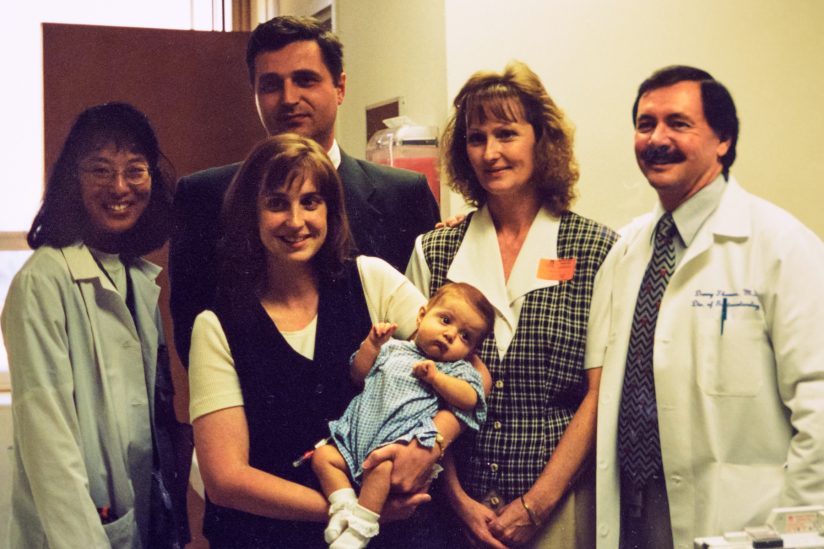 Lydia Hand, center, as an infant after her transplant in 1998, with her mother, grandmother and liver transplant team (Photo/Courtesy of Children’s Hospital Los Angeles)

Hand, now 18, was CHLA’s first living donor liver transplant patient. As an infant, she also was diagnosed with biliary atresia, a rare life-threatening disease where bile ducts cannot expel bile from the liver. In 1998, Hand received a liver from her grandmother. Today, the Lancaster resident is a college freshman majoring in music who said her donated liver is still going strong.

“It’s pretty amazing how far she has come,” Valdepeña said. “I want Donovan to grow up and have a bright future just like Lydia is having.”

A leader in liver transplants

CHLA’s Liver and Intestinal Transplant program has since grown to become one of the largest programs in the country — the hospital is now a consistent leader in the volume of living donor liver transplants performed nationwide among pediatric centers, with success rates well above national averages.

“But statistics are not the real story,” said Daniel Thomas, clinical professor of pediatrics at the Keck School of Medicine of USC and medical director of the Liver and Intestinal Transplant Program at CHLA. “It is seeing patients like Lydia Hand grow, accomplish and live to be a happy young woman with a life full of dreams and hopes.”

Coincidentally, the same team that worked on liver patient No. 1 also treated patient No. 300. Thomas is both Hand’s and Donovan’s hepatologist while Yuri Genyk, professor of clinical surgery, was their transplant surgeon.

Donovan’s success is truly the culmination of the knowledge and skills from the 299 liver transplants that preceded him.

“Donovan’s success is truly the culmination of the knowledge and skills from the 299 liver transplants that preceded him, including Lydia’s,” said Genyk, surgical director of the Pediatric Liver Transplant program at CHLA. “It speaks to the expertise and dedication of the entire liver transplant team, as well as the collective support we receive from all the services CHLA provides.”

When Donovan’s parents brought him to CHLA in October, doctors told them Donovan urgently needed a new liver. Daniels volunteered and was found to be a match. The transplant took place Nov. 18, with Genyk performing both parts — Daniels’ surgery at USC in the morning and Donovan’s transplant at CHLA several hours later. Daniels was released and finally was able to visit Donovan just in time for Thanksgiving.

Hand and Donovan’s family met in Donovan’s hospital room on Dec. 1, the day he was discharged.

“I’ve heard all the stories about my transplant from my family, but to actually see and hear what their family is going through is a special experience,” Hand said. “Donovan is me, I was once him, and it’s incredible to know that hundreds of other kids have received this life-saving procedure at CHLA in the years between us.”

Researchers at the Keck School of Medicine of USC have found a way to identify patients who may be susceptible to certain complications while recovering from large wounds and complicated reconstructive surgeries.

It was 10 years ago this month when Bill Widen received a new lung — and a new life.