Historian and USC University Professor Kevin Starr, who served as the State Librarian for California for a decade, died Jan. 14 in San Francisco. He was 76.

“Professor Starr was our dear friend, a beloved teacher and a USC treasure, but he truly belonged to the world,” USC President C. L. Max Nikias said. “His bright mind, rigorous intellect and passion for language will be deeply missed, but his extraordinary books will continue to inform us for generations to come.”

A native of San Francisco, Starr joined the USC Dornsife College of Letters, Arts and Sciences in 1989 and was a professor of history and policy, planning and development. A highly sought-after lecturer and writer, he was known for his far-reaching explorations of life in California. He authored the renowned eight-volume series Americans and the California Dream, which chronicles social and cultural history in the state since its admission in 1850.

The Atlantic magazine called the series “monumental,” and the Los Angeles Times referred to his books as “indispensable.”

As for Starr himself, he described writing as “a way of engaging the thought process in the most profound way.” 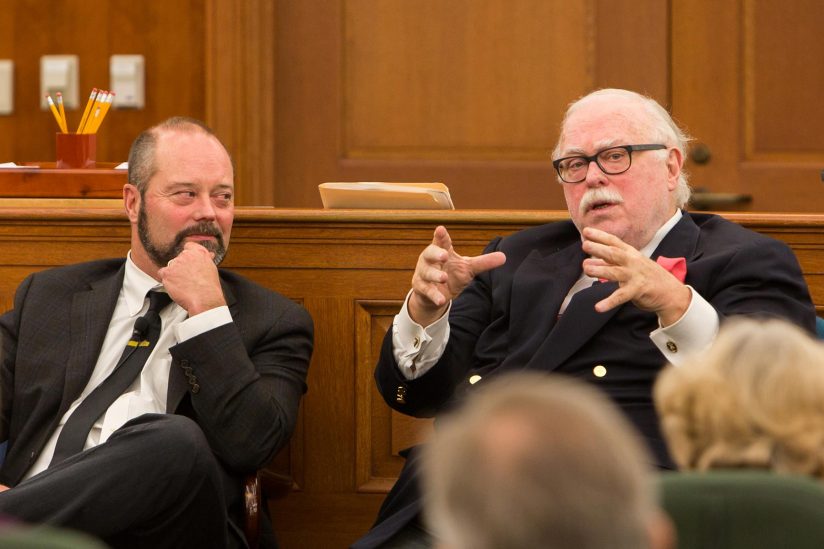 Kevin Starr, right, and William Deverell at a 2014 event celebrating the Huntington-USC Institute on California and the West (Photo/Brian Morri, 211 Photography)

“Kevin Starr was a rarity in his field — an iconic figure whose scholarly understanding of the complexities and beauty of California’s history were matched only by the masterful prose he used to convey that understanding to others,” said USC Dornsife Dean Amber D. Miller. “The academic world has lost a truly exceptional human being.”

An imposing figure, Starr was also a dapper — if at times rumpled — dresser, known for his trademark bow tie and straw boater. His sudden passing spurred appreciation from USC faculty.

“California has lost its eminent biographer. And we have lost one of our most valuable and trusted professors,” USC Provost Michael Quick said. “The history of California could not be written without him both as a scholar and as the California State Librarian. Our students were lucky to have had him in the classroom and as a memorable lecturer.”

Fellow USC historian William Deverell said: “Kevin Starr thought and wrote in the grandest tradition of ‘History’ with a capital H, and he did it grandly and with grace. He was utterly unique, and that uniqueness enriched millions of us.”

Dana Gioia, Judge Widney Professor of Poetry and Public Culture at USC, alluded to Starr’s personality. “Kevin was the most jovial and congenial colleague you could imagine. He had a gift of making any social occasion — from a small lunch to a formal banquet — a more lively and memorable occasion. He would address everyone at the table, one by one, with generous attention to draw them into the conversation. Every meal became a feast of conversation.”

A fourth-generation San Franciscan, Starr was born to parents whose Irish ancestors had arrived in California in 1852. After a hardscrabble childhood, he attended the University of San Francisco and became editor-in-chief of the school’s newspaper. He served as a lieutenant in the U.S. Army in Mannheim, Germany from 1962 to 1964. Following that, he went on to Harvard University, where he earned his doctorate in English and American literature and honed his interest in California history from an insider’s perspective. He also earned a master’s in library science from the University of California, Berkeley.

Starr’s writing won him a 1976-77 Guggenheim Fellowship and the Gold Medal of the Commonwealth Club of California. He was a fellow of the American Antiquarian Society, the California Historical Society and the Society of American Historians. He served as California State Librarian from 1994 to 2004, when Arnold Schwarzenegger, then governor of California, named him State Librarian Emeritus.

In 2005, he received the Presidential Medal from USC. The next year, Starr was awarded a National Humanities Medal by President George W. Bush and received the Centennial Medal from the Graduate School of Arts and Sciences at Harvard. In 2010, he was inducted into the California Hall of Fame.

Starr is survived by his wife of 53 years, Sheila Starr; daughters Jessica Starr and Marian Starr Imperatore; and seven grandchildren. Services are pending.

University Professor Kevin Starr was one of the panelists at the Los Angeles Times Festival of Books.

Kevin Starr, University Professor and professor of history at USC College, has won the Los Angeles Times Book Prize in history for Golden Dreams: California in an Age of Abundance 1950-1963.

Kevin Starr and Dowell Myers speak at a USC Price event titled “How Can California Prepare for a Future That’s Already Here?”

USC College historian Kevin Starr was among the legends inducted into the 2010 California Hall of Fame during a ceremony in Sacramento Dec. 14.