About five years ago, Kevin Kassel traveled to Ecuador with a school group and experienced something that would change his life. As part of the trip, he delivered a water filter to an elementary school.

“When we got there, we learned that a little girl had died from diarrhea as a result of contaminated water only the week before,” he said. “I was shocked. We don’t think of diarrhea as fatal, and the fact that the solution was so simple and inexpensive — a $60 water filter — made me think: Maybe if we had been there a week earlier, that little girl might still be alive.”

The thought was powerfully motivating. When he got home, Kassel started Club H2O.

“The idea was that anyone traveling to a developing country for tourism or charity could get a water filter from us and deliver it to a school or community in need,” Kassel said. “For instance, when USC sent a team of doctors to help with disaster relief efforts after the Nepal earthquake, we sent 60 or 70 filters with them. With very little demand on their time, people could make a lasting impact in the world.”

Now, as a senior at USC, Kassel is preparing to launch a global business spun off from that charity — Aqus.

“For Aqus, I design, manufacture and sell simple water filters to people in developing countries who currently rely on boiling water or buying bottled water. For poorer customers, Aqus filters have a high enough flow rate to allow them to generate a supplemental income by providing a lifesaving service to their community,” he said. “It’s an example of what social entrepreneurship can achieve.”

The seeds of a social enterprise 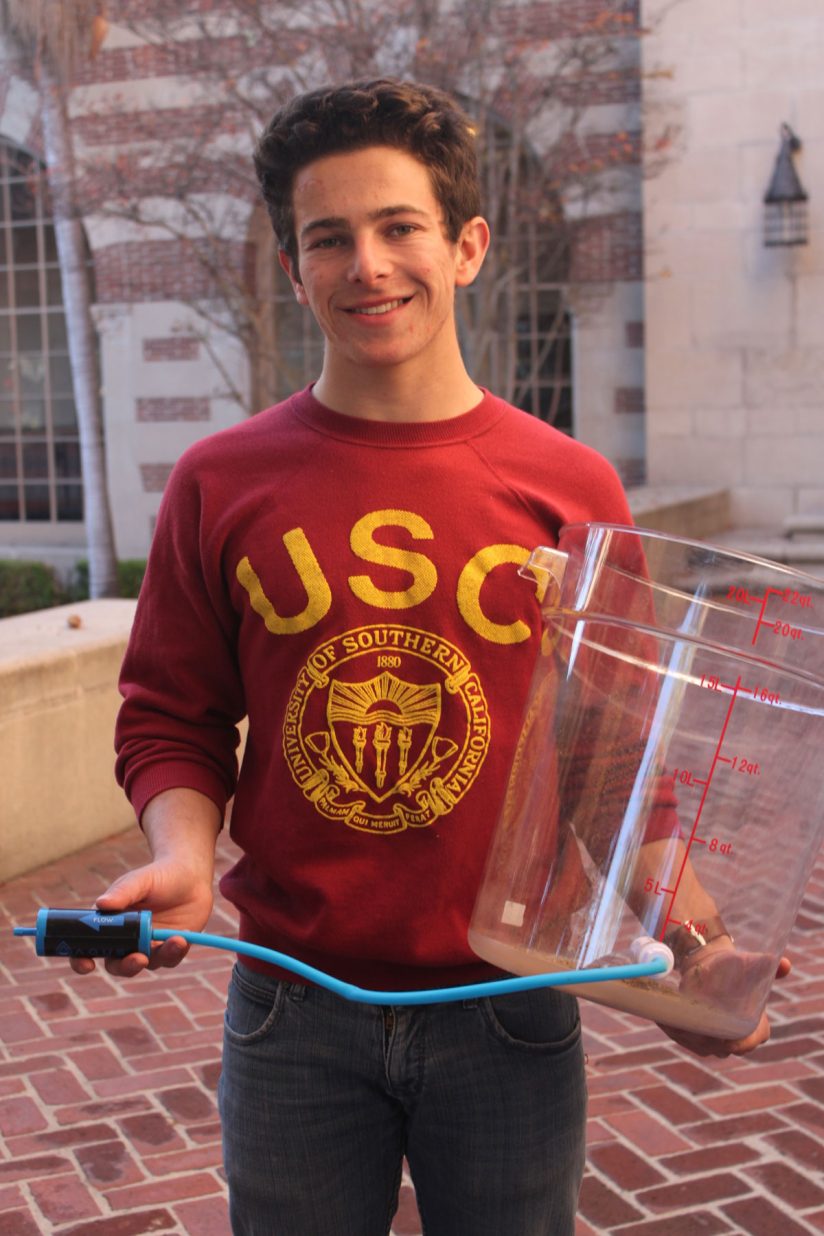 Kevin Kassel holds a model of the filter he manufactures through his company, Aqus. (Photo/Julie Tilsner)

As a teen, Kassel always knew he wanted to be an entrepreneur. It was in his bones: Both of his parents are entrepreneurs. He also knew he would go to the USC Marshall School of Business to make his dream a reality.

With a double major in business and environmental studies, he pursued his academic interests, but didn’t have a solid idea about a business venture. Then he decided to use Club H2O in a pitch competition during his sophomore year. By then, his charity had delivered water filters to 31 countries.

Abby Fifer Mandell, the executive director of USC Marshall’s Brittingham Social Enterprise Lab, introduced him to the idea of a social enterprise and suggested he investigate courses in social entrepreneurship.

He did. And it was in one of these classes that he had his “light bulb” moment.

“I was listening to Jessica Jackley, co-founder of Kiva.org, and Ben Goldhirsh, co-founder of GOOD, when I suddenly realized that there was a tremendous unmet demand for water filters in developing nations, and I knew exactly what kind of filter I needed to create to meet both the needs and budget of my customer,” he said.

“I almost jumped from my seat in the middle of that lecture.”

At USC, Kassel has found mentors in the Social Enterprise Lab, like Mandell, Adlai Wertman, David C. Bohnett, founding director of the Brittingham Social Enterprise Lab, and Jackley, who also teaches at USC Marshall. And he found hands-on help from others in USC’s entrepreneurial eco-system, including James Bottom from Blackstone Launchpad and Paul Orlando from the USC Incubator.

He said his classes through the Lloyd Greif Center for Entrepreneurial Studies have helped give him the tools to turn his vision for Aqus into a reality.

What I learned about customer validation and lean startup methodology has played a tremendous role in getting the company to where it is today.

“What I learned about customer validation and lean startup methodology has played a tremendous role in getting the company to where it is today,” he said.

In addition, the opportunity to participate in more than 10 pitch competitions has helped him refine his message and effectively communicate his vision to potential investors, partners, employees and customers.

Aqus was a finalist in the Greif Center’s New Venture Seed Competition and the Marshall Innovation Coast Competition — where, he pointed out, his was the only company without doctors, scholars or MBAs on the team. He also recently won the Daniel Floersheimer Global Impact Prize at the USC Stevens Student Innovators Showcase.

As he nears graduation in May, Kassel has committed to growing Aqus into a global enterprise. He is preparing to raise capital and hire his first full-time employees within six to eight months, he said. And while he is currently focused on larger institutional buyers, he plans to break into the consumer market in West Africa within the next year.

“I knew that USC was the right place to go and that no other school would invest in me more,” Kassel said. “That turned out to be completely true, and I am still blown away on a weekly basis.”

In small, remote villages in the mountains of Afghanistan, people benefit each day from the entrepreneurial drive of MBA students at the USC Marshall School of Business.