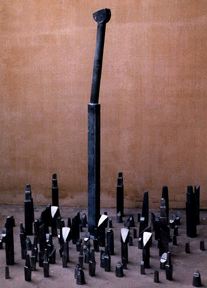 Works of two contemporary artists from the same Spanish city – but with very different artistic visions – will go on display Wednesday, Sept. 10, at USC’s Fisher Gallery.

Although Calvo and Navarro have been widely exhibited in Europe and Latin America, the Fisher show will be their first on the West Coast. Afterward, the exhibition will travel to Chicago; Mexico City; Monter- rey, Mexico; and several South American cities.

Fisher Gallery Director Selma Holo said she decided to bring the artists’ work to Los Angeles after traveling through Spain in 1994 on a Fulbright Scholarship to study the way Spanish museums function.

“In the course of my travels I had the privilege of getting to know a number of contemporary Spanish artists, many of whom were doing fascinating work in a variety of media,” Holo said. Calvo and Navarro struck her as the most interesting of all – and with the help of Consuelo Ciscar, the ministry of culture for Valencia, Spain, the Fisher exhibition was born.

“I am grateful to Consuelo for agreeing with me that Miquel and Carmen would strike a special chord in both Los Angeles and Chicago. These cities are my two homes, and I know them to be obsessed, albeit with entirely different results, by architectural and urban issues,” Holo writes in the foreword to the exhibition catalog.

“These are all issues and questions that infuse so much of Navarro’s sculpture. At the same time, I felt there would be special affinities to Carmen’s work, to her iconoclastic attitudes to history and to her poignant struggles with the redemptive and distorting lure of memory.”

Calvo first gained widespread attention for a series of minimal works using pellets of clay – in her own words, “fossilized brushstrokes” – attached to bare canvases to create color fields and orderly arrangements in light tones. More recently, she has been experimenting with assemblages of found objects.

In many of his sculptures, Navarro organizes metallic and terra-cotta forms into an urban landscape. In “La Ciudad Roja” (Red City), for example, horizontal roofs, farms, bell towers and trees contrast with a central “city” of sharply vertical towers.

Both artists were born in the coastal Spanish city of Valencia, came onto the Valencian artistic scene in the early 1970s and maintain studios there.

The catalog accompanying the exhibition will be in the form of a boxed set containing separate publications on each of the two artists. The catalog, published in Spain, will present essays in Spanish and English by curators Manuel Blanco, a professor of architecture at the Polytechnic University of Madrid, and Juan Manuel Bonet, director of IVAM, Valencia’s Museum of Modern and Con- temporary Art. In addition, Francisco Calvo Serraller, former director of the Prado Museum, contributed an essay on Calvo’s work.

The exhibition’s opening reception was broadcast live, in audio and video, via the World Wide Web on Sunday, Sept. 7. The same team of USC computer and video specialists who last May produced the first-ever live Webcast of a university commencement also created the un- precedented reception Webcast.

In conjunction with the exhibition, Fisher Gallery will present Tuesdays at Fisher, a free weekly series of informal dialogues, workshops and performances. The first session will be an open house on Tuesday, Sept. 16. Other sessions will include a workshop where participants create a sculpture in an unusual medium (Sept. 23); a “Wake-Up Call!” exploring gender issues in the exhibition with a panel of USC professors (Sept. 30); an exhibition lecture by Holo (Oct. 14); and a permanent collection tour (Nov. 11). All sessions start at noon.