In a cluttered fabrication lab stuffed with the smells of polyurethane and wood, USC’s AeroDesign Team discusses its approach to this year’s remote-controlled model aircraft.

Wyatt Sadler ’92, the team’s industry adviser, struggles to hold his tongue as he hears them leaning toward a design choice that was made — and didn’t work — several years ago.

As a founding member of the team, Sadler has seen it all. He strongly believes in promoting the independence of students, allowing them to make their own decisions and learn their own lessons. However, that doesn’t mean he won’t guide them in the right direction.

“I try and let them do their own thing in terms of the design, but I definitely try and steer them toward or away from things,” Sadler said. “It’s a revolving organization. Every four years, the kids go away and so you end up learning the same lessons.”

His 27 years of experience with the team makes him confident that the Trojans will be ready for the annual American Institute of Aeronautics and Astronautics Design Build Fly competition in Tucson, Ariz., this April, which they have attended for the last two decades, earning a position in the top 10 percent nearly every year.

“The first year we entered, we won handily,” Sadler said. “It was how many laps you could do and we flew 15 laps. The second-place team flew three.”

Back in the day

In 1990, Sadler was one of just three students on the inaugural team run by Ron Blackwelder, a professor in the Aerospace and Mechanical Engineering Department at the USC Viterbi School of Engineering, with Blaine Rawdon, now an adjunct professor in the department, as the industry adviser. Today, there are more than 40 students involved, requiring a management system of design groups, each in charge of an individual component.

Every year at Design Build Fly, there are new missions that the team’s plane must complete. Most often, there are speed, weightlifting and endurance contests, all of which must be fulfilled by the team’s sole aircraft, making design all the more complicated.

Anyone can make a car roll forward, but to make an airplane fly in control with stability is a huge feat.

“A tricky part is not overbuilding things. Because it’s an airplane, it has to be as light as possible,” Sadler said. “Anyone can make a car roll forward, but to make an airplane fly in control with stability is a huge feat, and they’re doing everything from the ground up.”

Luckily for the team, Sadler is an expert at building model airplanes. He has worked on and flown remote-controlled aircraft since childhood, a passion he followed into his professional career.

“The students are eager to emulate Wyatt’s can-do attitude and approach to aircraft design,” said Charles Radovich, the team’s faculty adviser. “They clearly respect his advisement and respond by pushing themselves in the lab to figure things out on their own.”

In addition to hands-on build expertise, Sadler exemplifies generosity. At competitions, he often volunteers to assist other teams by fixing or flying their planes. The team echoes this openhandedness by readily supplying competitors with parts, advice and mentorship, making USC’s AeroDesign Team as well known for its charity as it is for skill. 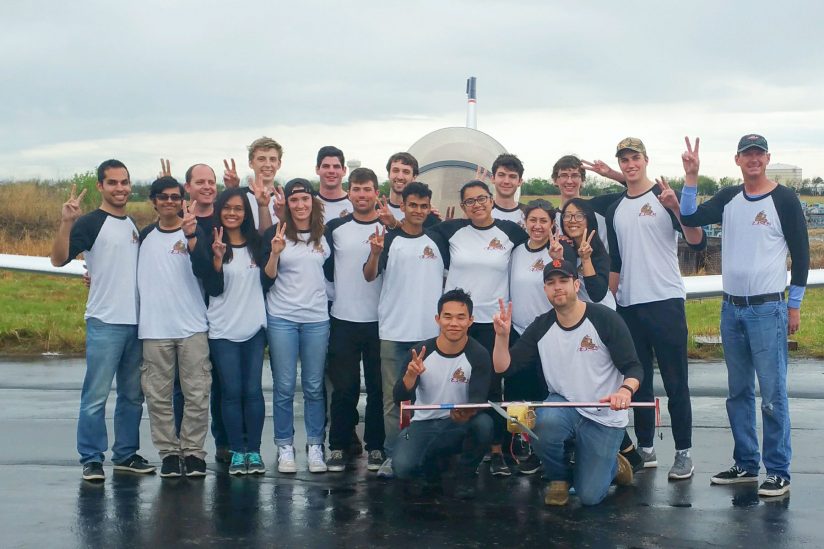 “We have spent many late nights in other teams’ hotels helping them finalize or repair their airplane,” Radovich said. “We actively seek out teams that appear to be in need of guidance. We offer advice on design improvements and often donate supplies that will make them more competitive.”

Professionally, Sadler is an aeromechanical systems engineer for AeroVironment, a technology company that develops military-grade unmanned vehicles. There, he designs, builds and tests radio-controlled aircraft, including two large-scale solar-powered planes funded by NASA, Pathfinder and Helios.

“The Pathfinder was built before my time, but I did a lot of work on it and flew it,” Sadler said. “Then, in 1997, we built Helios. There were only 10 or 12 of us that designed and built that plane, and it ended up being the highest flying non-rocket airplane ever.”

In 2001, Helios reached an altitude of 96,863 feet, a world record for any non-rocket powered aircraft, manned or unmanned. (It crashed into the Pacific Ocean in 2003.) The Pathfinder currently resides in the Smithsonian National Air and Space Museum, along with five other vehicles produced by AeroVironment.

“My parents were good about exposing me to a lot of different things, but I liked airplanes,” Sadler said. “Luckily, my professional career has taken that to the next level.”

Growing up in Pales Verdes, Sadler spent the majority of his days flying model airplanes along the 300-foot cliffs, dreaming of becoming a fighter pilot. Mother Nature, however, had other plans for him. Standing at 6 feet 8 inches, Sadler did not meet the physical requirements of a United States Air Force pilot, coming up several inches too tall in addition to having poor eyesight.

Instead, he decided he would pursue a career designing airplanes and opted to enroll at USC as an aerospace engineering major. While he excelled at hands-on engineering courses, his grades suffered from math and physics classes, eventually forcing him to leave the program. He transferred to USC’s School of Letters, Arts and Sciences, graduating in 1992 with a bachelor’s degree in geography and minor in film.

Despite several setbacks along the way, Sadler’s hard work and persistence allowed him to follow his dream of becoming a pilot. This tenacity has not gone unnoticed.

“When he applied for a job at AeroVironment, he was a successful bartender,” Rawdon said. “His qualifications were his long experience with aeromodelling and his skill, experience and professionalism with the AeroDesign Team. He has been very successful at AeroVironment, demonstrating to the students what passion and determination can do.”

Their experience with this smaller engine will help Trojans prepare for another launch this spring.

The rocketeer, researcher and environmentalist believes that advances in sustainability can be adapted from technologies developed for space exploration.

While trying to figure out her late father’s “dangerous secrets,” new graduate Betty Stearns discovered a world of endless possibilities.