Members of the USC Gould School of Law family are all smiles after learning that recent graduates scored a California bar passage rate of 88 percent among first-time takers.

The achievement was especially gratifying given that this year’s pass rate for first-time takers was better than last year’s 87 percent and the school’s highest in five years.

“You deserve the heartiest of congratulations,” Dean Andrew Guzman told alumni, friends and family, who gathered on Dec. 2 in USC’s Town and Gown, where the recent graduates were sworn in as attorneys to the California and federal bars.

“I am so proud of you on this important and happy occasion as you take your final step toward a career in law,” Guzman said, noting that the ceremony marked his first as dean of the law school. “This is a big treat for me.”

“This exam really tests your motivation,” Guzman said. “These results are tremendous.”

A time for celebration

Michael Figgers ’16 was among the jubilant grads celebrating with classmates. He said the faculty and coursework at USC Gould prepared him to endure the grueling exam, especially the one-hour essays. However, he added that the “sense of camaraderie” among his classmates also helped fuel his success. 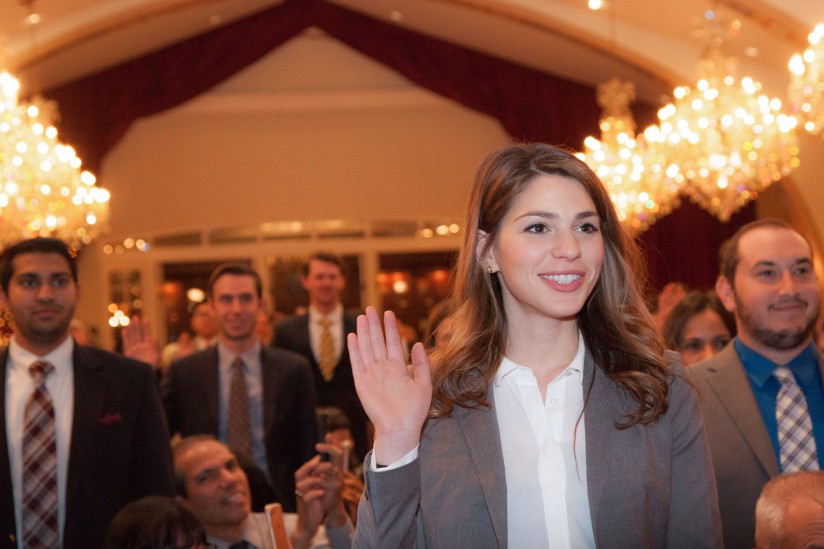 “Even when I hadn’t made actual contact with my classmates in a while, it was sort of like there was a sixth sense among us,” said Figgers, who is currently one of the attorneys serving USC’s Office of General Counsel. “As we were studying for the exam, we seemed to always know when the others needed to receive some positive energy.”

It was the camaraderie of the evening that the Hon. Virginia A. Phillips noted in her remarks before delivering the oath of admission to the United States District Court for the Central District of California.

“This is a great accomplishment,” she said. “The memory of the moment that you passed the bar is one of those rare things that unites all of us in the legal profession.”

“For all of you here, this day will be reflected upon as you get older as one of the most joyous occasions in your life,” House said. “It is also one of the most solemn and sacred acts of your future professional legacy.”

House also urged the new lawyers to focus on other important points: “Remember to always consider ethics within every decision made or advice given. Prepare your cases with passion. Maintain your integrity at all times because your reputation will only be as good as your last bad act. And have compassion for yourself and for all others.”

After the ceremony, Talin Haroutounian ’16, who had just taken her oath alongside twin sister Sarin, paused to reflect.

“This is the first moment that it’s felt real — our last step before we officially became lawyers,” she said. “It’s such a good feeling!”

Inspired by a USC Gould alumnus, Trojans serve as mentors for African-Americans at local school.