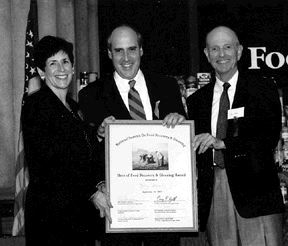 Susan H. Evansand Peter Clarke, co-directors of From the Wholesaler to the Hungry, accept a prestigious award from U.S. Secretary of Agriculture Dan Glickman for their efforts to get unsold produce to those in need.

Faculty and staff of USC’s “From the Wholesaler to the Hungry” project instructed food service industry and charitable organization rep-resentatives on how to create a successful fresh produce recovery program at the National Summit on Food Recovery & Gleaning held Sept. 15 and 16 in the nation’s capital.

USC’s project, based at the Institute for Health Promotion and Disease Prevention, was honored with Secretary of Agriculture Dan Glickman’s award for “Heroes of Food Recovery.” The award also honored the late Mickey Weiss, who founded the country’s first produce recovery program.

The summit, held in Washington, D.C., and at satellite sites throughout the nation, featured the co-directors of From the Wholesaler to the Hungry, research associate Susan H. Evans and professor of communication Peter Clarke, explaining how in the past six years they helped launch 52 programs nationwide that channel large donations of fresh fruits and vegetables to community agencies.

Evans and Clarke’s project designed a method for city-by-city consultation to support new sites facing the challenges of bringing businesses and charitable agencies together, moving huge volumes of perishable product and channeling it quickly to millions of low-income people.

“Our project began when we discovered the nation’s first wholesale charitable produce distribution program in Los Angeles in 1991 and began transplanting it across the country,” Evans said. “This became the prototype for what could become a bold and environmentally friendly intervention to improve public health. The consumption of fresh fruits and vegetables is essential to fight or control many diseases, such as heart disease, diabetes and cancer.”

“In our panel at the summit, we discussed how programs for saving surplus fruits and vegetables from being needlessly dumped can spread to every American city and beyond,” Clarke said. “Last year, programs around the country distributed 153 million pounds of fresh produce to needy adults and children.”

The summit was organized by a partnership among the Department of Agriculture and several national nonprofit groups: The Chef and the Child Foundation, the Congressional Hunger Center, Foodchain and Second Harvest. Its goal was to help expand the growing national movement to recover food to help the hungry.