George Lucas ’66 and his wife, Mellody Hobson, received the 2016 Ambassador for Humanity Award of USC Shoah Foundation – The Institute for Visual History and Education. Presented to the couple by USC trustee and USC Shoah Foundation founder Steven Spielberg, at a gala dinner held Dec. 8 in Los Angeles, the awards recognize the couple’s long-standing commitment to humanitarian efforts and education.

Hobson is the president of Ariel Investments. Lucas, a graduate and patron of the USC School of Cinematic Arts, is one of the world’s most renowned filmmakers.

The Ambassador for Humanity Award is reserved for individuals who embody the institute’s values and mission to promote tolerance and mutual respect. The husband and wife have been longtime supporters of the institute, as well as advocates of children’s education. Hobson is the chairwoman of After School Matters, a nonprofit that provides Chicago teens with high-quality, out-of-school time programs. Lucas founded The George Lucas Educational Foundation in 1991 to foster innovative teaching techniques.

USC President C. L. Max Nikias welcomed guests and noted that 2016 marks the 10th anniversary of Shoah Foundation’s arrival to the USC campus and the tremendous growth that has taken place. 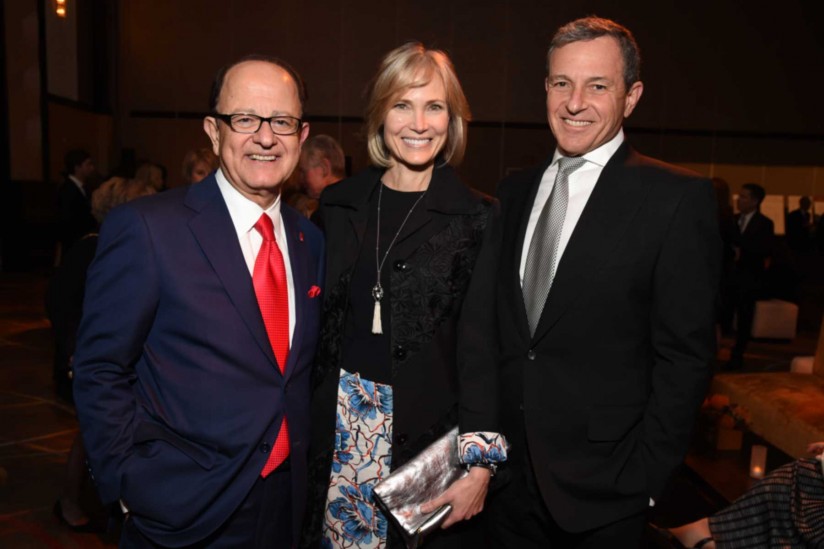 “USC Shoah Foundation has digitally preserved an archive of more than 54,000 testimonies of survivors of genocide,” he said. “Those testimonies are now used to advance vital scholarship, here and across 66 college campuses around the world. And 16 million people accessed testimony from the archive last year alone.”

Noted guests at the event included director J.J. Abrams, civil rights pioneer Jesse Jackson, Los Angeles Mayor Eric Garcetti and Walt Disney Co. CEO Robert Iger, a past recipient of the award, along with his wife, Willow Bay, director of the USC Annenberg School of Journalism. Disney was the event’s presenting sponsor. The evening was produced by June Beallor, a founding executive director of USC Shoah Foundation. Beallor established the ambassadors event for the institute in 2000 and has produced every year since its inception.

Actors Harrison Ford and Kerry Washington paid tribute to the honorees and guests were entertained by comedian and television host James Corden. Composer John Williams conducted the Recording Arts Orchestra of Los Angeles in a performance of beloved theme songs from Lucas films, including Star Wars. Williams also conducted a moving rendition of the theme song from Schindler’s List, Spielberg’s film that was the inspiration for USC Shoah Foundation.

A time for education

Several of the presenters spoke passionately about the rise of anti-Semitism and other forms of fear and hatred around the world. Speaking about a recent attack on a Muslim woman, Spielberg said it is imperative for people to take a stand.

“Now more than ever there is staggering urgency to educate people on the darkness that consumes the world when hate and violence and tribalism are given a free pass,” he said. “So now, more than ever, we need to teach the next generation to take a stand and speak their conscience when bigotry is happening right in their faces. Because we are part of the solution. Because there can be no more bystanders.”

In introducing the honorees, Spielberg praised Lucas and Hobson’s dedication to making the world a better place.

“Mellody and George possess courage and vision and humanity,” he said. “They are fearless when it comes to pointing out hypocrisy and injustice. They have both led lives of the greatest integrity and the highest accomplishment.”

“Genocide is not only a war on life, but a war on memory,” he said. “These testimonies ensure that a path so charred will never burn beyond recognition. They will always provide the moral oxygen that fuels resolution and resilience. Mellody and George are expanding the boundaries of the kingdom of memory, and in doing so, they are expelling the worst impulses of humankind to the pale of irrelevance.”

In accepting his award, Lucas referenced his own lackluster performance in school when he was young and the importance of inspiring students by giving teachers the tools they need to do their job.

“There are great schools, there are great educational practices, but what I discovered is none of them are written down,” he said. “Nobody collects them or archives them or makes them available. So when a group of teachers are doing it right, in a few years they dissipate and everybody forgets what happened. That’s what got me started in education.”

Hobson teased her husband by reminding him that she earned A’s in school. On a more serious note, she touched on the issue of racism, telling the audience that it would have to make a decision — whether to see the world as it is or how it should be.

“As overt bigotry resurfaces, I feel like there are choices to be made. The question I’m asking myself about me and others is, ‘Will you be a realist or will you be a moralist?’ ”

Stephen Smith, USC Shoah Foundation executive director, spoke of the ongoing need for the preservation of survivor testimony. He, too, warned about the rising tide of anti-Semitism and discrimination.

“Every story is unique, but they have a common origin of hate,” he said. “Hate harmed them, but survivors speak to hope, not hate. They are the living voice of resistance — every word an act of resilience and strength.”

Chicago After School Matters student Lynette Lucero talked about her own path to understanding and the importance of not being a bystander.

“What I am discovering is that we have a responsibility to do right,” she said. “We can use our words and our stories to unite us. We can help others find their words and tell their stories.”

The Ambassadors for Humanity event is a key part of USC Shoah Foundation’s efforts to help forge partnerships that sustain the organization into the future. The gala raises funds to support its educational programs, including expansion of the institute’s award-winning IWitness website, professional development for global educators, the Center for Advanced Genocide Research, academic conferences, expanding access to the Visual History Archive and testimony preservation.

Would you like to know more about USC Shoah Foundation? Watch this video marking the 10th anniversary of its move to USC.

USC alumnus, filmmaker and benefactor George Lucas ’66 was awarded the USC Presidential Medallion, the university’s highest honor, by President Steven B. Sample on April 26 at the annual Academic Honors Convocation.

Mellody Hobson: ‘Your bravest self will be your best self’