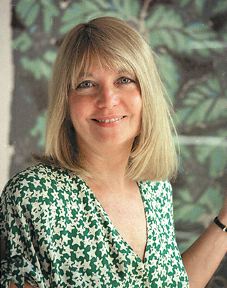 Carol Muske writes poems that are praised by critics for marrying intelligence, emotional resonance and technical craft. Her new book, An Octave Above Thunder: New and Selected Poems, brings together new works and a selection from Muske’s earlier volumes.

Indeed, Muske’s earliest memories of language are associated with her mother reciting poetry to her children – words and syllables rolling off her tongue with vivid emotion, like thunder rolling across the North Dakota prairie where her mother grew up.

Muske gives credit to her mother for her lifelong affinity for poetry in the title poem of her new book, An Octave Above Thunder: New and Selected Poems (Penguin Books, 1997). The collection spans more than 20 years of Muske’s writing, bringing together new works and a generous selection from Muske’s earlier books. Along with 10 new poems, the book includes works from Camouflage (1975), Skylight (1981), Wyndmere (1985), Applause (1989) and Red Trousseau (1993).

A professor of English who teaches in the creative writing program, Muske (who goes by her married name, Carol Muske Dukes, in fiction) concurrently has written a book of critical essays and reviews of women poets, Women and Poetry: Truth, Auto-biography, and the Shape of the Self. The book is part of the series Poets on Poetry, published by University of Michigan Press.

While she has earned praise for her two novels, Muske still considers herself a novice at fiction. Poetry is her first love and remains her preferred mode of writing, she said.

“I have found poetry, from the beginning, to be more hospitable to me,” she said. “Poetry is closer to the heartbeat of my life.”

Muske’s poems are described by critics as accessible, yet edgy; personal, yet universal. Her work marries sophisticated intelligence, emotional resonance and technical craft. Her language moves with a musical quality; she combines autobiographical facts with references to larger themes such as language and learning, poetry, motherhood, women, selfhood, love, life and death.

“In her newest poems, Muske tells us exactly what it is like to be alive now, on the brink of a new millennium that we are already sick of hearing about, but she also dwells in memories, extracting personalities and moments of wonder, elements that work to particularly splendid effect,” writes Donna Seaman in a recent review in Booklist.

An Octave Above Thunder reflects the progression of Muske’s work. She feels she covered a distance from her first book, Camouflage, to her next, Skylight.

“I went from a very derivative first book to finding a kind of voice for myself,” said Muske, who expresses some discomfort about assessing her work. “I was trying to write about the world and a poet’s place in the world, and women.”

The poems from Wyndmere are the most autobiographical. Some deal with Muske’s mother and her life growing up on a farm in the town of Wyndmere, N.D. In others, Muske reflects on her own daughter as well as her husband, actor David Dukes, and other family members.

In the poem Blood Hour, Muske, who grew up in the city of St. Paul, Minn., wonders what her mother’s life must have been like growing up on a farm.

as I pass through it, dreaming,

with my taller brother and the .22

He is teaching me how to handle a rifle.

In another poem, Wyndmere, Windemere, Muske writes about her mother’s influence on her poetry.

We sat on the back step and read

being split apart by some shadow-

butcher. I could feel that violence…

Muske considers the poems from Applause her most political. They were written at a time when friends were dying of AIDS. That sorrow, combined with her daughter’s birth, heightened her awareness of mortality. Red Trousseau, on the other hand, is provocative and life-affirming, a fiery collection that Muske considers a “real departure” from her previous works. The poems deal with cultural differences and challenge expectations, as in the poem Barra de Navidad, Envoi, about seeing a funeral in Mexico where mourners wear white, rather than black.

Insubstantial as a mirage,they hovered, pure, white, improbable as the place: a bleached spit of earth slid between the old half-alive volcano perched above us, and the bay.

Her newest poems, Muske said, have elements of autobiography, but they are less narrative. “They are committed to ideas of language, how it inspires and fails us,” she said.

In Octave Above Thunder, a poem written in 10 sections, she uses the metaphor of thunder to bring together ideas and emotions, showing how poetry both elicits emotion and sometimes eludes it. One section, for in- stance, is about teaching. In it, a teacher tries to show how words trigger ideas. At first the students can easily see images based on abstract ideas: “She says Death/and her students/scream tombstone, skeleton, Grim/ Reaper, hangman…”

But by the end of that section, things are reversed; a specific image is clear but the abstraction is lost:

She knows there is no way

back. A door closes. She

everyone sees his face.

She says Love and they see

nothing, they are blind.

For Muske, poetry is a combination of the analytical and the expressive – thought and feeling.

“The transformation of words into poetry is the synthesis of those two,” she said. “The analytic and expressive come together and create a third thing, which has to do with the alchemy of words.”

In one of her new poems, Like This, Muske embodies this concept by exploring how we invent similes and how we learn to think. She gives an example from an experience she had while teaching poetry to a special group of students from the inner city.

“These kids were brought up in a culture of violence, of denial of beauty, yet one kid said, ‘There’s this spray of bullet holes over my door and it looks like a peacock’s tail,'” she said. “This astonishing image epitomizes poetry for me.”

In the poem, she concludes:

…But look, he sees what we die / from not seeing – how different beauty opens / its different eyes. The expanse unfolds, / many-eyed, iridescent, it holds. Unbroken, / salutes you. The fiery gaze turns gold.

A Poetic Alchemist of Words