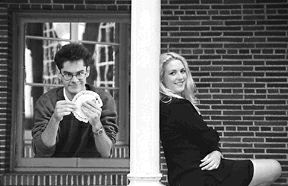 Is young magician Thomas Meier actually in that window above? Well, not exactly – we fooled you if you think these freshman magicians are in the same photo. Actually, Meier and Bellamie Blackstone had such busy schedules that it was difficult to find a time to shoot them together. So our Chronicle photographer shot them separately and one of our technical wizards worked some magic in Photoshop, combining the two images.

For as long as Bellamie Blackstone can remember, she has been watching sleight of hand, so her fellow freshman shouldn’t have fazed her.

Still, the youngest daughter of the late magician Harry Blackstone Jr. has to admit she was stunned at Thomas Meier’s reaction when she introduced herself by first name only.

“I thought, ‘How did you know that?'” Blackstone recalled.

Yes, there is magic in this year’s freshman class. Due to an odd coincidence – or is it really a coincidence? – two of the nation’s most prominent young magicians have enrolled in the Class of 2001.

And by the second week of school, Meier had stumbled upon Blackstone, the heir apparent to the famous magic act that her father inherited from his own father, Harry Blackstone Sr. In the exchange in front of Doheny Library, Meier distinctly had the upper hand; he had heard that his idol’s daughter would be attending school with him. But soon the kindred spirits were on equal footing.

Meier, a physics major, is the more decorated of the two. He won a first-place trophy in close-up magic in the World Magic Championships, held July 12 in Dresden, Germany. Considered the Olympics of magic, the competition pitted 160 competitors and drew 2,400 magicians. Meier also is a junior member of the Magic Castle, the famous private club for magicians in Hollywood. In addition to performing at the Magic Castle, he appears at birthday parties and other private events.

But Blackstone is more experienced. She was just 4 months old when she first appeared on Broad-way in her father’s magic act. By the time she was 11 months old, he was pulling her out of illusion boxes. Until Harry Blackstone died in May at age 62, Bellamie and her mother, Gay, were fixtures in his act, along with hundreds of rabbits, a camel, a tiger, an elephant and dozens of other performers.

In honor of her father, she performed his signature dancing handkerchief trick this summer at an annual magic convention in Colon, Mich. Later this year, she will perform at a fund-raiser for the Blackstone Foundation, a scholarship fund for higher education in the arts.

MEIER’S INTEREST IN magic was kindled as a preschooler by professional magician Doug Henning, who at the time lived across the street from the Meier family in Pacific Palisades. “He pulled this coin out of my ear,” Meier recalled. “I had this feeling of wonder.” But the Trustee Scholar, who graduated from Los Angeles’ Harvard-Westlake School, is largely self-taught in the art of magic. Before he was 12 years old, he struggled through Hoffman’s Modern Magic, an esoteric 19th-century guide.

For him, much of the thrill is conceiving of such elaborate stunts as those that won first-place honors in two U.S. competitions, qualifying him for the world championships in Germany. After some coin tricks, he forced a deck of cards into a balloon and then popped it, sending 51 cards into the air. That revealed a second balloon containing the deck’s final card, which had been marked earlier by an audience member. Later, Meier made a ring taken from the same audience member materialize in an ice cube.

Meier spent a year and a half devising and polishing the act.

Blackstone, meanwhile, learned at the knee of the master. At the time of his death, Harry Blackstone Jr. laid claim to the most Broadway performances of any magician. A USC alum, he worked for 18 years as a radio announcer before picking up the wand when his own father – a vaudeville legend who knew Houdini – died in 1965.

But if magic is in Blackstone’s and Meier’s blood, so is deep ambivalence.

“Theater, I love,” said Blackstone, who chose it as her major. “Magic, I’m not sure.”

For one, as a woman, taking over her father’s act would be difficult, she said. “I’d have to change so much of it, and I don’t know that I’d want to do that.”

Besides, Blackstone is in- trigued by the possibilities of performing solo, a taste she acquired in speech competitions while attending Redlands High School. In her senior year, Blackstone nabbed the state high school championship in dramatic interpretation for her rendition of a monologue from Whoopie Goldberg’s 1986 Broadway show The Spook Show.

“It was something you do on your own, which is a great way to perform,” Blackstone said. “I really like the control of performing alone.”

Then again, she may follow in the footsteps of one of her three older sisters and work behind the scenes in stage production.

Meier, too, is still trying to figure out how magic is going to fit into his life.

“Physics is like magic,” he said. “It’s a fundamental curiosity about how things work, and it’s heavy into problem-solving. When I’m trying to come up with an effect, I think, ‘How can I possibly achieve this?'”

Meier is also interested in philosophy and theater. It was the array of his interests, in fact, that brought him to USC after being accepted by 13 institutions, including Berkeley, UCLA and Stanford.

“I found the most opportunity here to explore my many interests from physics to theater and philosophy,” Meier said. “They’re open to your crossing different boundaries, and I’m still into exploring.”

In coming to USC, Blackstone is following in the footsteps of her father, an active alum who announced the 1995 and 1996 commencements but missed the 1997 ceremony because of illness. He also advised theater dean Robert Scales on a recent revision of the school’s curriculum, bringing his youngest daughter to campus during many of his visits. “I’ve always wanted to come here, so here I am,” Blackstone said.