In the pool and on the golf course, in sand courts and on playing fields and everywhere else that athletes compete (including in Rio), Trojans stood proud. In the end, the Men and Women of Troy tallied an impressive total of victories and championships — all while reaching USC’s highest-ever student-athlete graduation rate. Get ready to cheer. 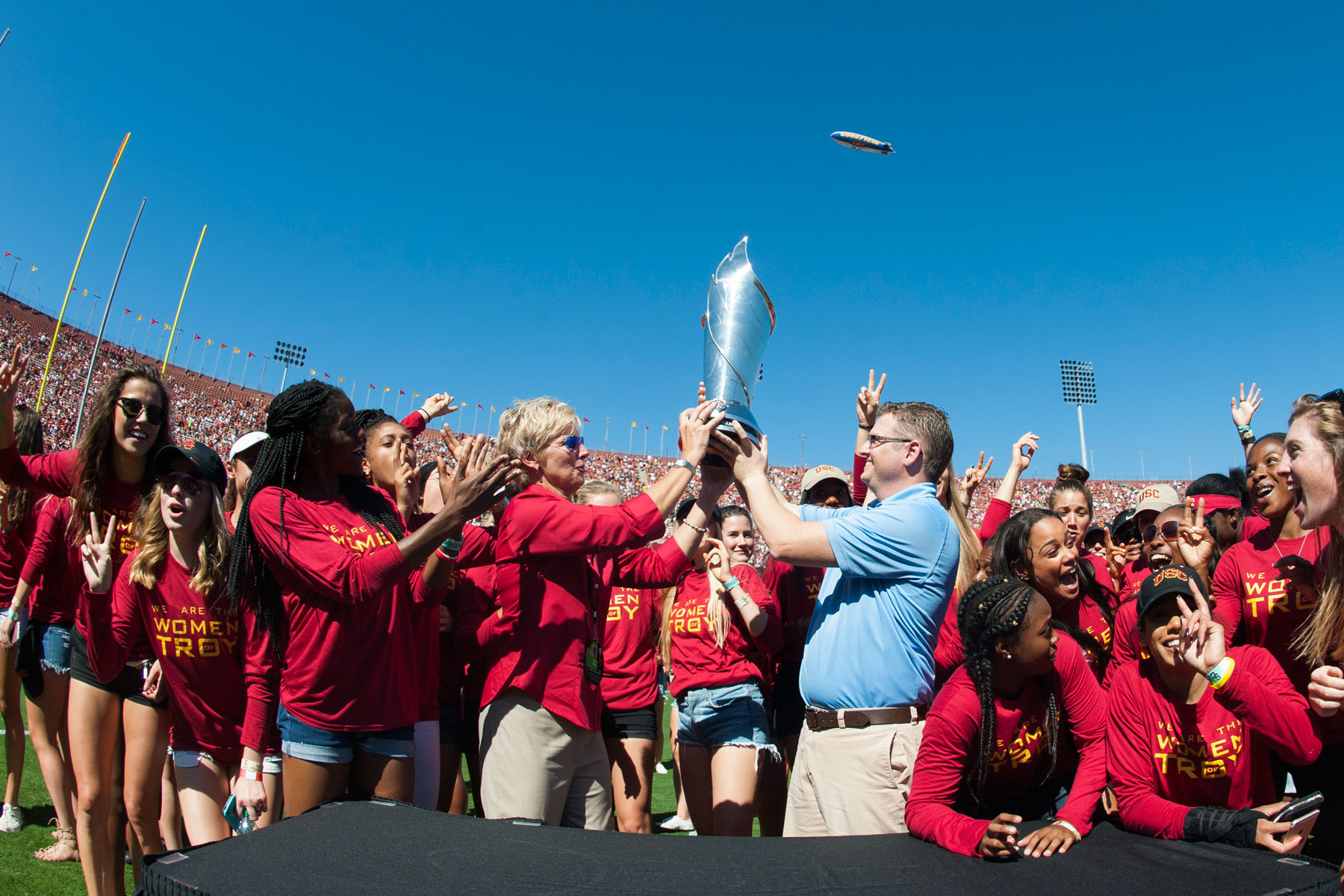 USC, which had eight of its women’s teams finish in the top 10 in NCAA championship play during the 2015-16 season, won its first-ever Women’s Capital One Cup, a prestigious all-sports competition that each year determines the best women’s and men’s Division I collegiate athletics programs. The Women of Troy scored 96 points to edge the Stanford women (90 points) and Penn State’s (83.5).

From a slow start to the Rose Bowl 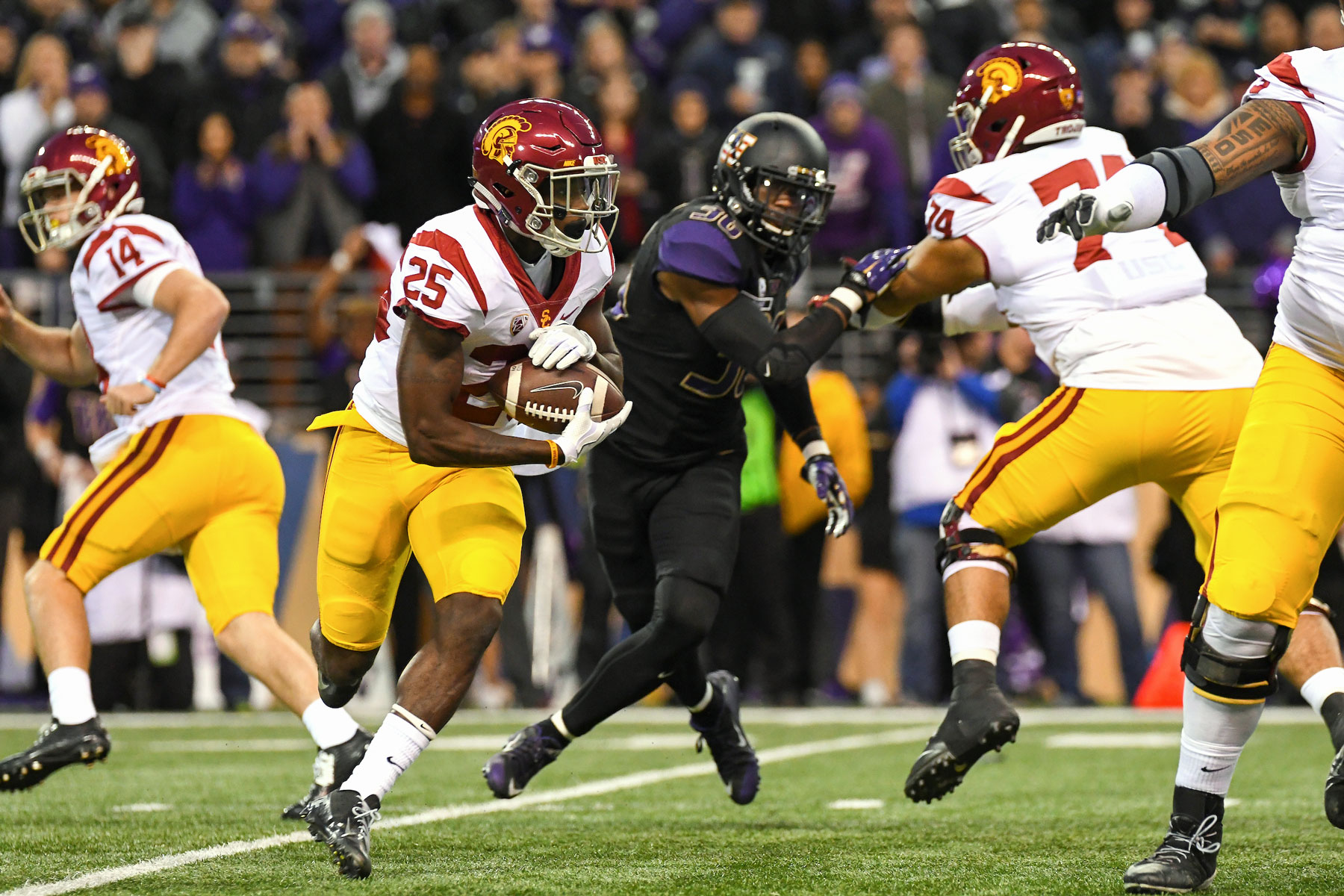 The USC Trojans defeated the No. 4 Washington Huskies 24-13 at Husky Stadium on Nov. 13. (Photo/John McGillen)

After starting the season 1-3, the Trojans caught fire and won their next eight games. Among the big wins: a 26-13 rout of No. 4 Washington, followed by back-to-back defeats of traditional rivals UCLA and Notre Dame. Coach Clay Helton is a finalist for the 2016 Bryant Coach of the Year Award. And now the No. 9 Trojans return to the Rose Bowl to play equally hot Penn State: The No. 5 Nittany Lions are on a nine-game streak. USC has played in more Rose Bowls (32) than any other team and won more, too (24). 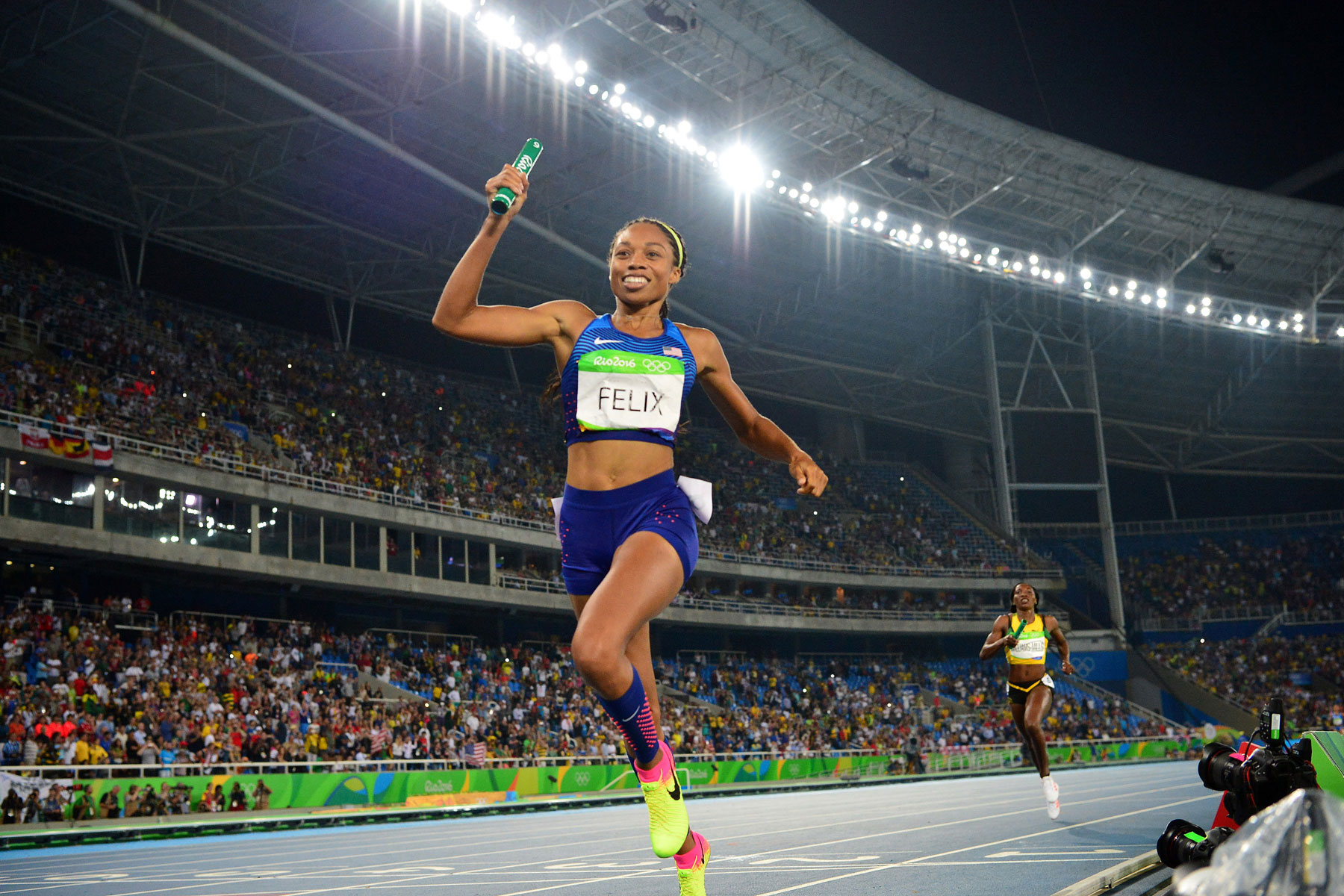 Allyson Felix celebrates after running the anchor leg on the United States women’s 4 x 400m relay that won in 3:19.06 during the 2016 Rio Olympics at Estadio Olimpico Joao Havelange. (Photo/Kirby Lee)

USC-affiliated athletes won 21 medals (nine golds, five silvers and seven bronzes) at the 2016 Rio Olympics, keeping Troy as the leader among U.S. universities for most all-time medals and gold medals and continuing its streak of having won a gold medal at every Summer Olympics since 1912. Former Trojan swimmer Katinka Hosszu of Hungary captured four medals in Rio, while former Trojan tracksters Allyson Felix of the U.S. and Andre De Grasse of Canada each won three medals. Felix is the Trojan career leader in total Olympic medals and became the most decorated U.S. track and field woman Olympic medalist ever.

Victory on the sand 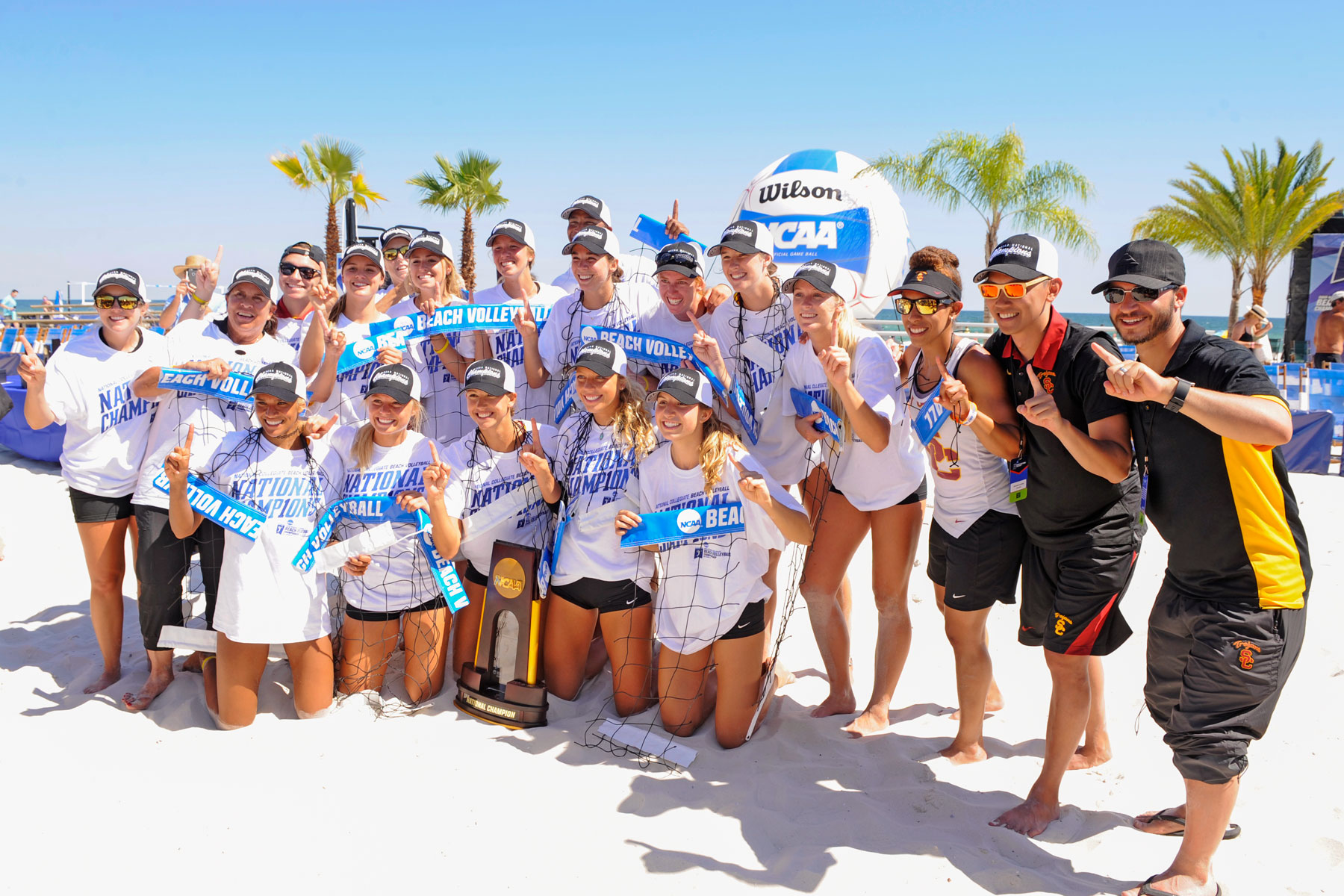 USC’s top-ranked women’s beach volleyball team cemented its place in history with a 3-0 win over No. 2 Florida State in the inaugural NCAA Beach Volleyball Championship on May 8. The Women of Troy completed the year on an incredible 30-match winning streak, securing back-to-back national titles in beach volleyball as the defending AVCA champions of 2015. Junior All-Americans Kelly Claes and Sara Hughes were chosen to the NCAA all-tournament team as the pair from the No. 1 position and sophomore Jo Kremer and senior Zoe Nightingale were all-tournament selections at the No. 5 spot. 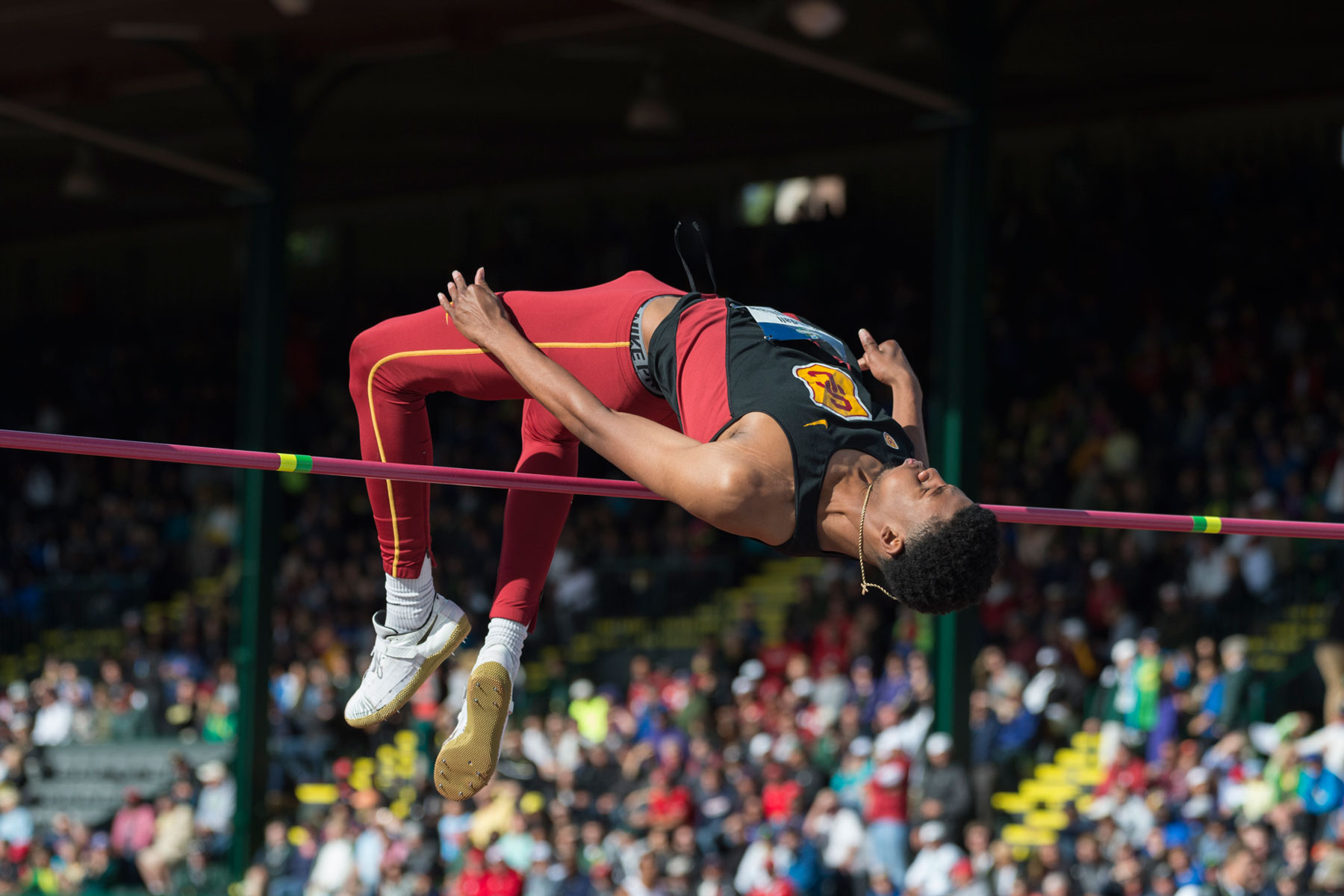 Randall Cunningham won the high jump title, Ricky Morgan Jr. placed seventh in the 400m and the USC men’s team finished 12th at the 2016 NCAA Outdoor Track and Field Championships in June. Cunningham, a sophomore, was perfect through 7-4.50 (2.25m) and basically eliminated the competition on his first five attempts to win the NCAA high jump title and earn first-team All-America honors. He became the 11th Trojan outdoor high jump champion and the first since Jesse Williams in 2006. USC’s 11 high jump titles are more than any other school, with Texas second at seven. Despite having an injury-depleted roster and just four athletes qualified for nationals, USC’s men scored 16 points, just one point outside of a top 10 finish.

Victory in the water 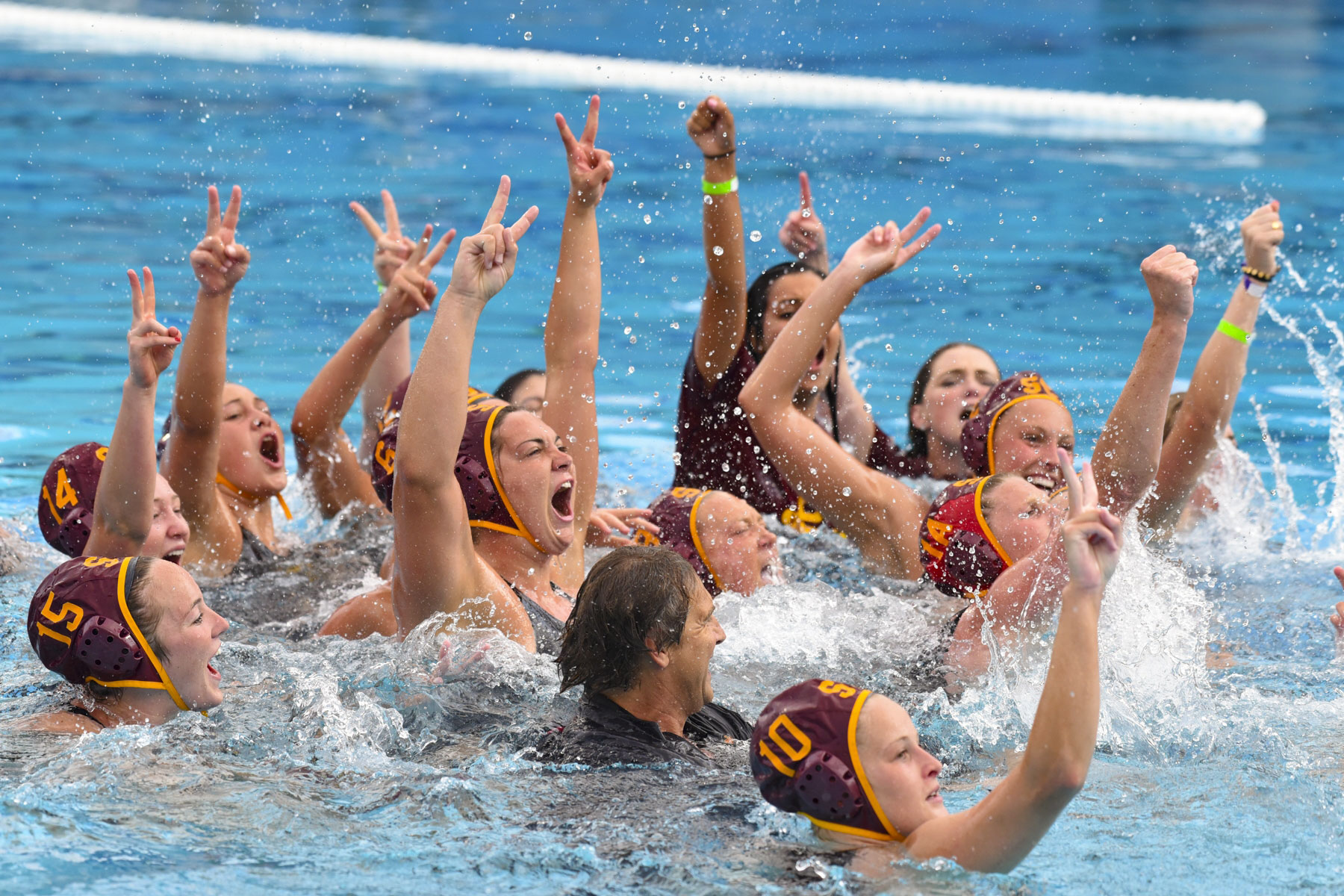 An 8-7 victory over Stanford secured USC’s second undefeated season in program history while capturing its fifth national championship with a perfect 26-0 record, The championship is head coach Jovan Vavic’s fifth national championship on the women’s side, making it a total of 14 national titles between the men’s and women’s programs combined. He remains the winningest head coach in USC history while now boasting four undefeated seasons in his time at the helm of the Trojan water polo programs — two with the men and two with the women. 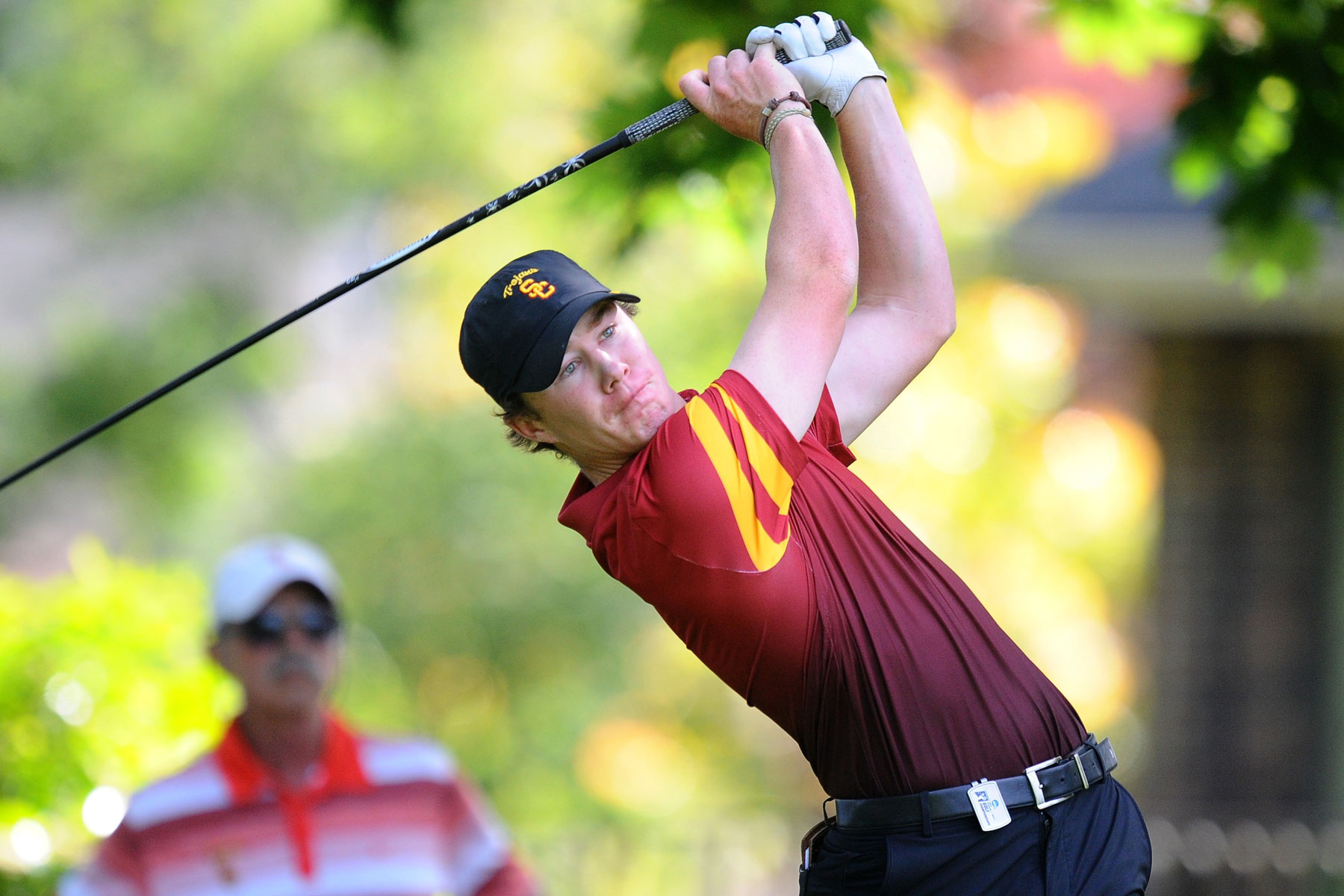 Teams participate in stroke play at the 2016 NCAA Men’s Golf National Championship at the Eugene Country Club on May 30. (Photo/Tim Cowie)

Hours after dispatching Vanderbilt in the quarterfinals, the No. 3 Trojans fell one match short of reaching their second straight national final, falling to Texas, 4-1, in the NCAA Championships semifinals May 31. USC reached the semifinals for the second straight season after falling in the NCAA final a year earlier. With the loss, USC tied for third, giving it its first back-to-back NCAA top 3 finishes since the Trojans finished third three years in a row between 1964-66. Junior Rico Hoey was USC’s sole winner in the semifinal match. 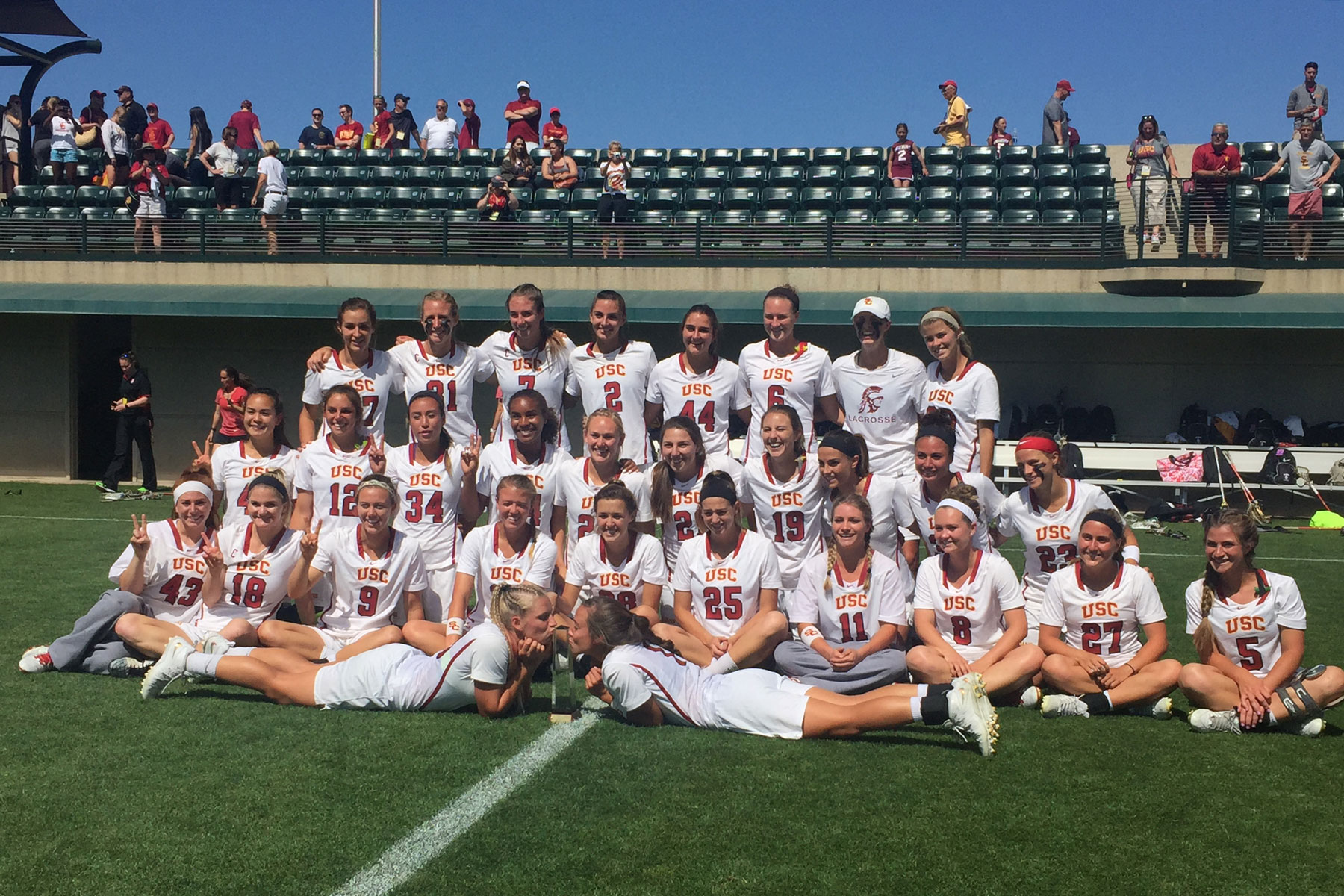 The top-seeded and fifth-ranked USC women’s lacrosse team (19-0) earned an 8-5 win over second-seeded tournament host No. 9 Stanford (14-4) to win the program’s first title in the Mountain Pacific Sports Federation, the conference in which the team plays. The Trojans became the first team in league history to go undefeated through both the regular season and the MPSF tournament. Three weeks later, the team was defeated for the first and only time in a 12-11 overtime decision by fourth-seeded Syracuse (19-5) in the quarterfinals of the 2016 NCAA tournament. The Women of Troy had their historic dream season ended by the Orange in the first period of sudden-victory overtime. It was USC’s only overtime game this spring. 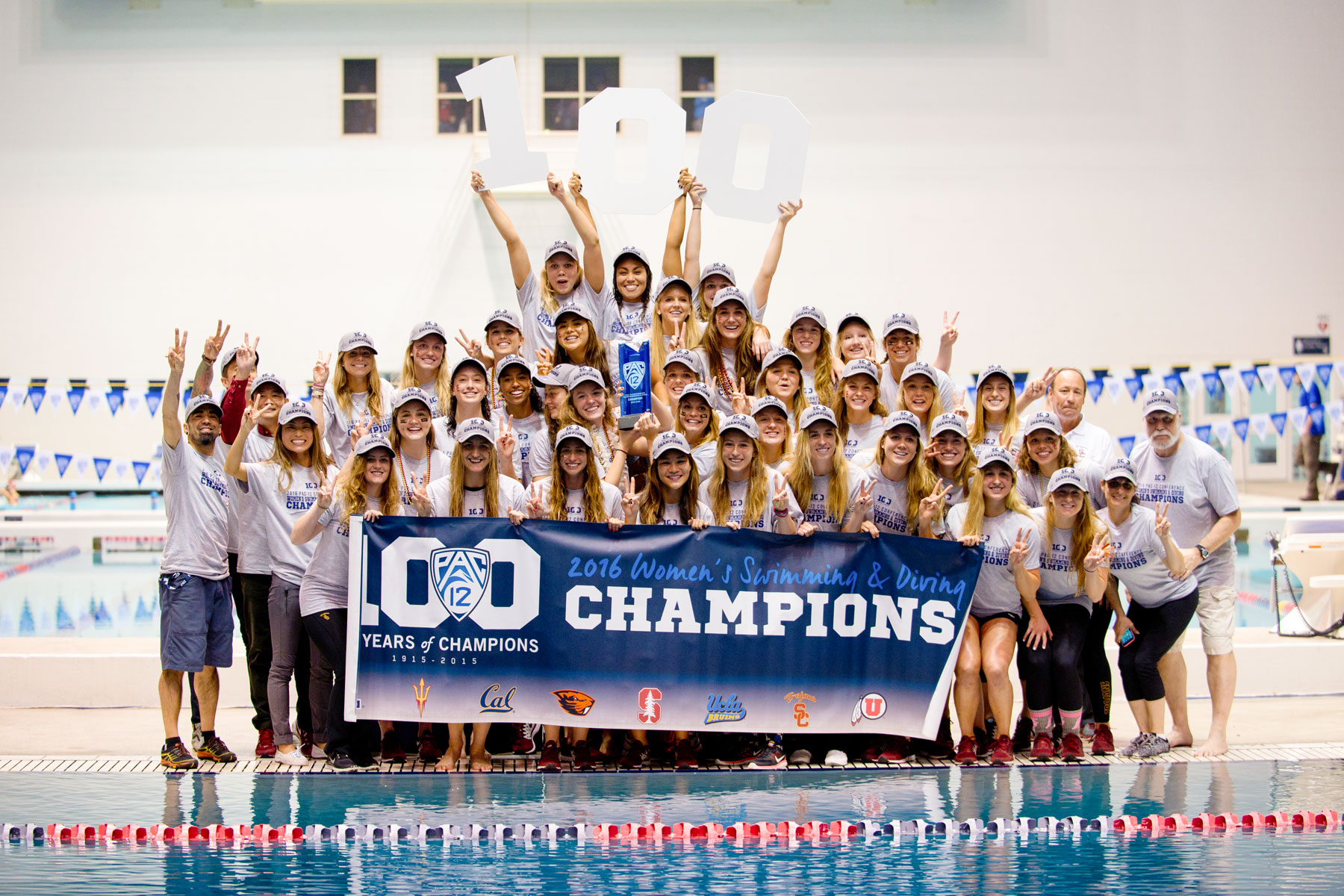 USC sent 21 swimmers and six divers to the 2016 Pac-12 Championships in February, and each one scored over the four-day meet as the No. 4 Trojans won the program’s first-ever Pac-12 title. USC’s previous best Pac-12 finish was second, something it did six times, most recently in 2013 when it scored a then-program best 1418.5 points and lost by 21 to Stanford in the closest finish in conference history. “I’m really proud of this group of women,” USC Coach Dave Salo said. “There is nothing greater than to watch a young group of adults forge a committed goal and stick to it and accomplish the goal.”

We run L.A., and the Crosstown Cup proves it 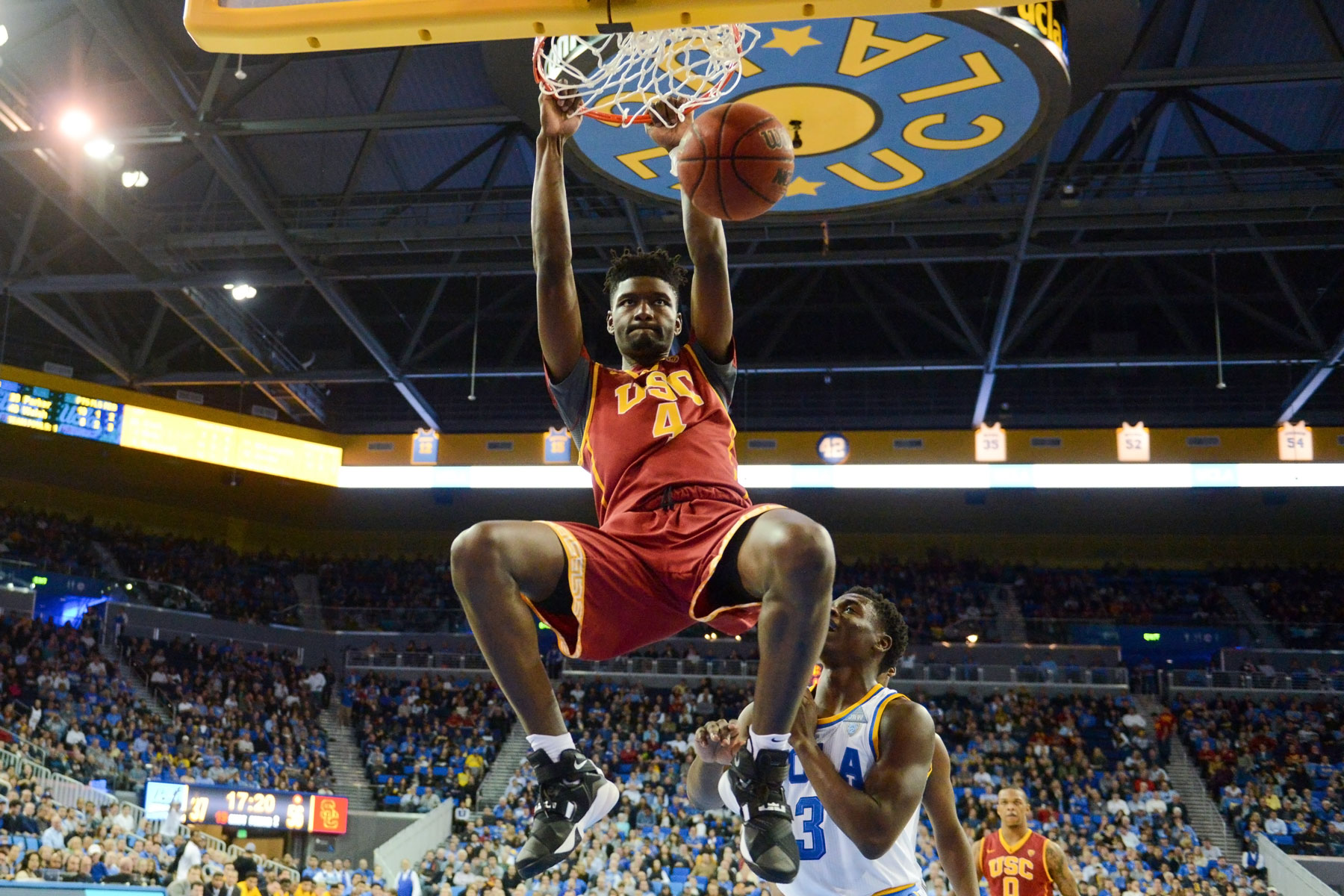 For the 10th time in the competition’s 15 years, USC in May has captured the 2015-16 SoCal BMW Crosstown Cup, the annual head-to-head all-sports competition with crosstown rival UCLA. USC clinched the Crosstown Cup after defeating UCLA in women’s rowing, men’s golf and women’s track all in the same weekend, giving the Trojans 115 points in the competition to the Bruins’ 70 points. At least 100 points were needed to clinch the 2015-16 version of the Crosstown Cup; the Trojans have won seven times in the past nine seasons. 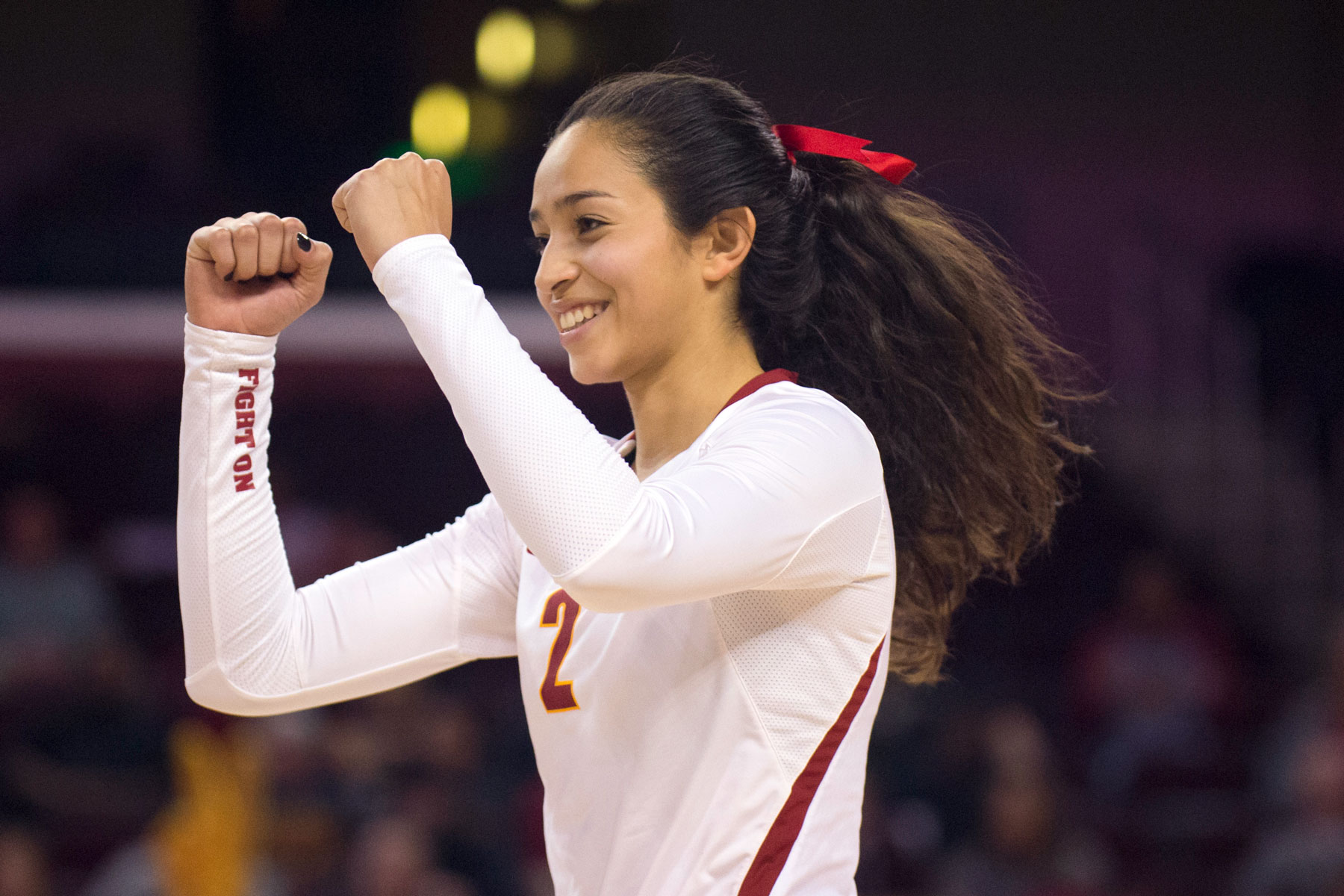 Sam Bricio won a spate of honors during her senior season at USC. (Photo/John McGillen)

USC senior outside hitter Samantha Bricio was named the Honda Sport Award winner for women’s volleyball in January, the fourth Trojan volleyball player to win the coveted award and the third under head coach Mick Haley in the last 12 years. She joins Debbie Green (1977-78), April Ross (2003-04) and Alex Jupiter (2011-12). The Honda Sport Award has been presented annually for the past 40 years to the top women athletes in 12 NCAA-sanctioned sports. “This is such a huge honor, and I am so thankful for it,” Bricio said. “I am especially grateful to my amazing teammates and coaching staff. I could not have done it without them.”