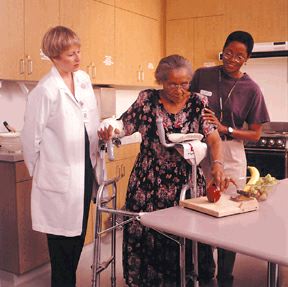 USC occupational therapist Julie McLaughlin-Gray, left, instructs a Los Angeles-area senior in the use of a safety-enhanced cutting board to help her client maintain her independence at home. To the right is occupational therapy master’s student Lynn Johnson.

Occupational therapy (OT) can make a significant difference in helping seniors to experience healthier, more independent and satisfying lives, according to a recent study by researchers on the Health Sciences Campus.

The study, called the “Well Elderly Study,” appears in the Oct. 22-29 issue of the Journal of the American Medical Association and marks the first time an occupational therapy study has been published by the well-known medical journal. The study represents the largest study to date in the field of occupational therapy and the first major research on the treatment benefits of OT in preventing illness and disability.

The researchers studied 361 seniors, ages 60-89, who lived independently in the Los Angeles area. One-third of the seniors received nine months of occupational therapy, one-third engaged in non-professionally led activity groups and one-third remained untreated. At the start and end of the project, each senior was assessed for physical health, mental and social functioning, and satisfaction with life.

In the program, members of the occupational therapy group received both individual and group treatment to help them achieve a healthy and satisfying lifestyle. The program was designed to help participants alter their ap-proach to everyday activities such as shopping, exercising and grooming in order to maximize function, productivity and vitality.

The social control group went on community outings, worked on craft projects, viewed films, played games and attended dances, activities which were conducted without professional supervision and which emphasized diversion and social interaction only.

No activities were conducted for the non-treatment control group.

The findings indicate the seniors who received occupational therapy experienced more gains and fewer declines in many important health-related areas of their lives. Seniors in the occupational therapy groups showed up to a 14 percent advantage over their control group counterparts in positive change over a range of measures, including better physical and mental health, greater vitality, higher quality social interactions, greater life satisfaction, fewer role limitations and less bodily pain.

The Well Elderly Study was based on fresh insights from occupational science, a new field of inquiry spearheaded by Clark. The academic discipline of occupational science was founded at USC in 1989, when the department became the first in the world to offer a doctoral degree in the field.

Occupational science focuses on the critical role of daily activities in promoting health and a sense of well-being in our lives.

“What we do every day, over our lifetime, has powerful effects on our health and eventually determines whether we can live alone in old age or whether we become dependent,” Clark said.

“We tend to put a lot of emphasis on diet and exercise, but all-around activity patterns – a daily routine that creates a healthy lifestyle – is just as crucial.”

Clark points to ordinary activities such as walking at a shopping center, exploring one’s neighborhood or tending plants as examples of ways to keep the physical body engaged and healthy. Activities like playing cards with friends or reading novels may help maintain mental acuity. These “occupations” also provide us with a sense of meaning and purpose in life, Clark said.

For example, one elderly woman enrolled in the study feared falling when making the first step up onto a bus. This fear kept her from venturing far from home and led to depression. The occupational therapist assigned to this woman helped her to confront the fear by creating a practice “bus step” in her apartment. The therapist also helped the woman take a journey on the bus, which gave her the confidence to regularly initiate her own trips. As a result, she felt much better about her life and experienced a new zest for living.

Because of the massive increase in the number of elderly Americans projected for the early 21st century, the widespread application of preventive occupational therapy has the potential to benefit society tremendously.

“This study sends an important message to the health-care industry: We can reduce morbidity and the effects of disability – and at the same time potentially reduce costs – by adopting occupational therapy as a preventive tool in our health-care arsenal,” Clark said. “Ultimately, it seems to be in the interest of managed care and government health programs to include coverage of occupational therapy in their plans. And because our sample was ethnically and culturally diverse, we feel that the effectiveness of preventive occupational therapy extends to men and women from major ethnic groups in the United States.”

Loren Lipson, a geriatrician in the School of Medicine and a co-author of the study, adds: “The uplifting thing is to go in with this innovative therapy and get people motivated, help them find meaning and, at the same time, make them healthier.”