Hundreds of those hours have been worked by two men. Both grew up in Los Angeles, got into trouble at an early age and then began a journey toward a better life working side by side on the biggest development in South Los Angeles history.

Every weekday for 11 months, Marcellous Bell has shown up an hour early for work as a carpenter apprentice at USC Village. That means getting up at 4 a.m. It’s an early start to a long and physically demanding day that in no way resembles the days he lived not long ago.

“I remember it like it was yesterday,” said Bell, who was shot in the back in the fall of 2015. The bullet just missed his spine.

“I was in front of my house,” Bell said. “I had a bad feeling. I saw a man at the end of the street and he started shooting at me. I saw my little brother. I picked him up and started running with him. I threw him in the house. Then I felt the bullet wound in my back and I hit the ground. The guy kept shooting, but he didn’t hit me. I heard a voice inside say ‘If you want to live, stay awake.’”

Bell recovered quickly from what was clearly the nadir of a life that he said had included petty theft and fighting. A gifted football player, Bell drifted downward after his high school graduation.

“I knew the things I was doing weren’t right, but I found myself slipping into a mindset of ‘this is the only way.’”

In the fall of 2015, Bell found a new way. He moved from Missouri back to his hometown of Los Angeles and received help from 2nd Call, a community-based organization with a mission of “assisting in the personal development of high-risk individuals.”

“I did a full 180. I’ve learned stuff here I didn’t even know I could do,” Bell said. “Everything in here is built on relationships and trust. You’re not going to hand the next guy a tool that can injure either one of you unless you’re sure it’s safe.”

Bell lives with his family just a few miles from USC. He recently finished his tasks at USC Village and is moving on to another construction project. He just bought a new car and plans to make carpentry a lifelong career unless, he said, he decides to open his own business. Bell takes pride in the work he did on USC’s enormous project.

“This is USC. I’ve already been bragging on Facebook and Twitter,” said Bell, who sometimes posts work-related pictures. “The dream of this is coming together, it’s almost done. It’s always going to be here, and I can say I was part of it. Someday I can say, ‘I helped put a roof over your head.’”

From crime to construction 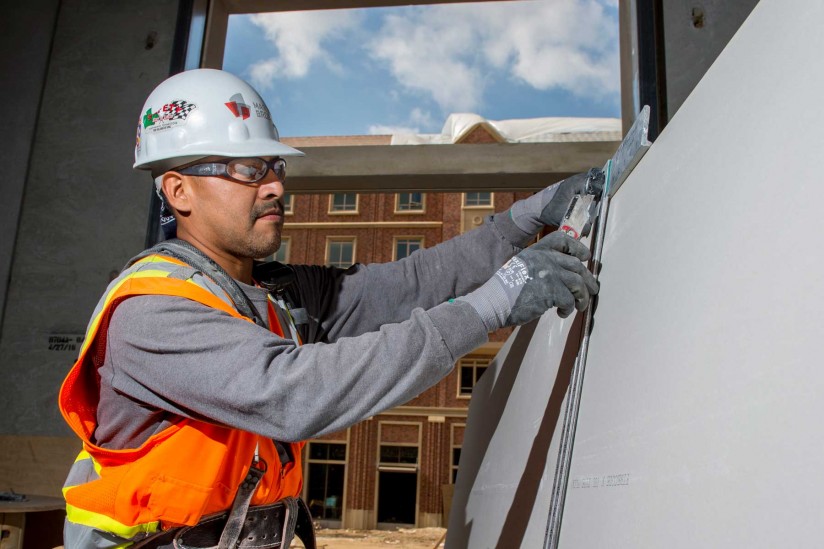 Safety and trust were not part of Jose Medina’s life for much of his youth. His first stay in juvenile detention came when he was barely into his teens; it was followed by stints in county jail and state prison.

“It’s the place I knew best,” Medina said during a lunch break on the USC Village construction site where he’s a carpenter apprentice. “I began to adapt to it. My mind accepted it and I felt at home there. I adapted to that environment as my reality. I thought that’s where I was going to be the rest of my life. It was wrong, but at the time it felt right. Everything is taken care of for you in there. I never paid bills.”

Now Medina is not only paying the bills, he’s also taking community college courses. The 37-year-old married father of two has checked off a list of goals that included a home for his family, a GED, a driver’s license, a car and enrollment in college courses. He overcame his fear of public speaking when he told his story at a Homeboy Industries event, which is posted on YouTube.

Putting out fires in prison

Medina’s transformation began in 2010 when he became a volunteer firefighter while incarcerated. The program is reserved for inmates with records of good behavior and no history of violence inside prison.

Medina fought wildfires on the front lines and slept in a camp. There were no bars and no locked gates, but once there was a bear.

“I’d only seen animals like that in magazines,” Medina recalled. “Ten feet away from me, a black bear was right there. Luckily for me, I wasn’t appetizing enough for him.”

Bear scares aside, Medina found serenity and clarity in an unfamiliar setting.

“I hiked up a mountain,” he said. “It was peaceful up there. There was no noise, no helicopters, no traffic. That’s where things began to change. That’s where I asked myself, ‘What are you going to do when you get out?’”

Working as a firefighter, Medina developed a work ethic and a new sense of self-esteem. Officially, he was an inmate firefighter, but only the second word of that title counted.

“Our captain told us, ‘Once you put on that gear, you’re a firefighter, one of us,’” Medina said.

Five years after becoming a firefighter, Medina was released.

“When I got out, I was asking everybody, ‘How do you change?’” he said.

Medina started with an entry level clean-up job at USC Village in April. Supervisors noticed his hustle and he’s now working toward becoming a Journeyman. With rough carpentry finished at USC Village, Medina is looking forward to his next job on a construction site.

First, though, he wants to see USC Village finished.

“I want to see it complete,” Medina said. “I can say ‘I worked on that project’ for the rest of my life. This is historic. It’s going to be here for the next 100 years and I was here from the beginning.”