After graduating from USC, Michael Pham MPH ’15 traded the urban jungle of Los Angeles for the lush tropics of Southeast Asia, where he spent two weeks training Cambodian officials in emergency response practices.

Pham, a paramedic, hoped to help standardize pre-hospital emergency care in Asia, which lacks medical service infrastructure and emergency transport. As of 2012, Cambodia had 0.17 physicians and 0.7 hospital beds for every thousand people, according to the CIA World Factbook.

“With simple emergency response skills like resuscitation, rescue breathing and first aid, anyone can save a life,” Pham said. “And in places where you can’t get medical help, trained first responders can prevent thousands of deaths and injuries.”

After almost a year of preparation, Pham and his team arrived in Cambodia and began assessing needs, touring facilities and shadowing medical professionals to better understand the health system. They trained government guards and police officials with a U.S. first responder course designed for the population and introduced U.S. guidelines and evidence-based medical protocol from the National Association of Emergency Medical Technicians and American Health Association. 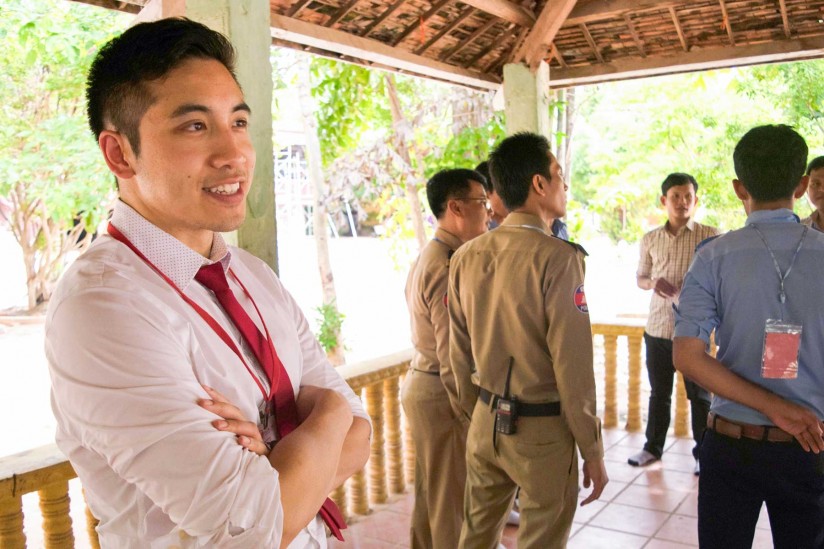 By the end of their trip, they certified more than 80 first responders and provided free health services to approximately 300 villagers. Pham’s work was formally recognized by the Cambodian government and covered by the local media.

Looking back, Pham recounted his favorite memories, including a meeting with Cambodia’s deputy prime minister and watching the sun set over Cambodia’s ancient Angkor Wat temple.

“The feeling of bliss and enlightenment and joy that came from completing our work and making a positive impact is indescribable,” said Pham, who will go back to follow up on the project in December and again next summer when he will begin a new program with the Ministry of Health.

Pham credits his success in Cambodia in part to his education and faculty mentorship at USC.

As a full-time health educator and director of his company, the CPR Hero Healthcare Training Center, Pham had chosen the online MPH program to supplement his career.

Given the flexibility to attend online webinars and class discussions, he felt he was able to succeed and “learn as much as a full-time student on campus.”

Pham’s professors in the Department of Preventive Medicine and the USC Institute for Global Health provided connections and access he needed to bring the project to fruition in Cambodia.

“My mentors made the right introductions and from there, I built a program from the bottom up and implemented it with my own U.S.-based team in partnership with the officials and health personnel of Cambodia.”

“I was able to use my skills to organize health personnel, create an action plan and lead my team in achieving our goals,” he said.

Family and empowerment matter for medical professionals striving to make a difference.

The donation will bolster clinical service programs in developing countries and establish a summer scholars fund.

In her first in-person State of the University speech, she lays out her blueprint for the university’s future while addressing key issues from the past.

Cambodian officials trained to save lives in emergencies