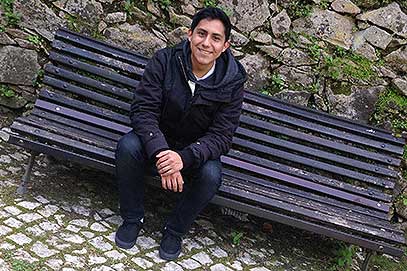 Rhodes Scholarships are “the oldest and best known award for international study, and arguably the most famous academic award available to American college graduates,” said Elliot F. Gerson, American secretary of the Rhodes Trust, in the Nov. 19 announcement. The scholarships provide all expenses for two or three years of study at the University of Oxford in England and may allow funding in some instances for four years.

The son of Mexican immigrants, De Los Santos graduated from the USC Dornsife College of Letters, Arts and Sciences as a Truman Scholar, Phi Beta Kappa, with USC’s Order of the Laurel and Palm, the university’s highest honor for graduating undergraduates. The Los Angeles City Council honored him as an emerging leader.

At Oxford, he plans to read for a Master of Public Policy and a Master of Studies in theology with a focus on Christian ethics.

“I’m the child of Mexican immigrants, an anti-hunger advocate and a former teacher and political organizer. My degree choices are a way for me to respond from a sense of moral urgency to help marginalized people,” he wrote in an email to The Associated Press. De Los Santos said his parents “were undocumented immigrants when they came to this country, but they’re citizens now.”

De Los Santos has served as an intern to the National Economic Council and the House of Representatives, and worked as the youngest Florida field organizer for the 2012 campaign of President Barack Obama. In the 2015-16 academic year, he taught English and social studies to sixth graders at the Champion South Mountain School in Phoenix.

Today, he works as a lobbyist and manager of public policy for the Association of Arizona Food Banks.

Rhodes Scholars are chosen in a two-stage process. First, applicants must be endorsed by their college or university. This year about 2,500 students sought their institution’s endorsement; 882 were endorsed by 311 different colleges and universities. Committees of Selection in each of 16 U.S. districts then invite the strongest applicants to appear before them for interview.

Ninety-five scholars will be selected worldwide this year, usually including several who have attended American colleges and universities but who are not U.S. citizens and who have applied through their home country.

Rubi Garcia lets us follow her journey as a USC undergraduate and the first in her family to attend college.

Who are USC’s freshmen? The highest achieving and among the most diverse ever enrolled

The most-represented high school is Foshay Learning Center, a public school less than a mile from the USC University Park Campus.