Just before the formal ribbon-cutting ceremony took place, Arthur Toga, director of the USC Stevens Neuroimaging and Informatics Institute, was installed as holder of the Ghada Irani Chair in Neuroscience.

USC President C. L. Max Nikias stressed how the opening was another significant step being taken toward fighting the most debilitating neurologic disorders of our time.

“Here we can hope to understand autism and Alzheimer’s and a host of other challenges,” Nikias said. “Here we now have an environment in which an electric sense of possibility is ever-present. We can expect to be surprised, as insight and solutions will burst forth in ways we cannot yet imagine.”

Mark and Mary Stevens, USC trustees and benefactors of USC Stevens Hall, were on hand to see the fruition of their commitment to multidisciplinary efforts in scientific innovation. Rohit Varma, dean of the Keck School of Medicine of USC and director of the USC Roski Eye Institute, also celebrated the grand opening and the advancements that could soon arise.

“The research from Dr. Toga and his colleagues at the USC Stevens Neuroimaging and Informatics Institute is exactly the type of forward-thinking, translational research that will drive the Keck School of Medicine’s success,” Varma said. “I am looking forward to the transformative science that will be conducted in this building in the coming years.”

The house that science built 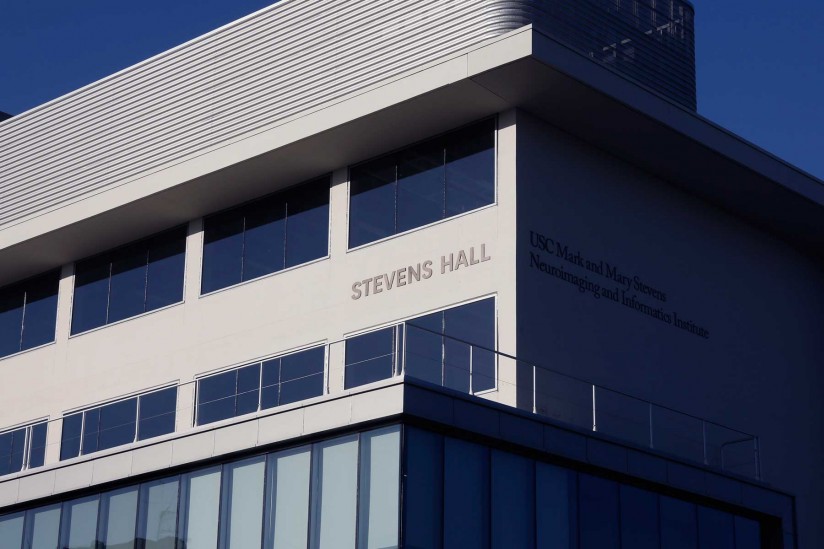 USC Stevens Hall is optimized for the study of advanced science. (Photo/Steve Cohn)

USC Stevens Hall is optimized for the advanced science for which Toga is known. This is because Toga himself designed the building alongside architecture firm SmithGroupJJR. The 35,227-square-foot building, renovated and rehabilitated from the original 1952 concrete frame, is naturally bright, with plenty of California sunshine streaming through glass walls. The main entrance has biometric access control with the ability to read a person’s identification badge, fingerprint or iris pattern.

The walls are lined with monitors displaying rotating images of exquisite, brightly colored brain maps. But the most fascinating features of USC Stevens Hall are the ones that will facilitate the USC Stevens Neuroimaging and Informatics Institute’s world-class research:

Toga has long been an acclaimed figure for his brain imaging research. Alongside USC Professor Paul Thompson, Toga is acclaimed for developing advanced algorithms and scientific approaches in neuroimaging, using massive data sets to better understand the brain’s geography in both population-based and disease-specific studies. At the time of the duo’s arrival in 2013, Toga noted that joining the Trojan Family “would invigorate [their] activities considerably.”

Through the efforts of LONI and the IGC, as well as numerous other studies slated at USC Stevens Hall, the university will continue to drive innovation at the point of biotechnology and data analysis.

“I designed every facet of USC Stevens Hall bearing in mind the challenges we face in neuroimaging and the tools my team needs to overcome those challenges,” Toga said. “Through the generosity of Mark and Mary Stevens, we have the ideal environment to enable our research, and you can expect the institute to chip away even faster at the perplexing neurological issues plaguing us today.”

How old is your brain, really? Artificial intelligence knows

Scientists reveal where schizophrenia may originate in the brain

Researchers studying a protein that is strongly linked to the psychiatric disorder are the first to determine its function.