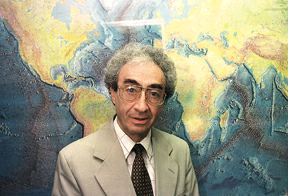 Richard H. Dekmejian stands in front of a map of the world. The political scientist said the United States is vulnerable to outside influence because it is a free society. But, Dekmejian insists, “The other side of the coin is worse to consider.”

WITH A MEMBERSHIP OF 55,000, a staff of 158 and an annual operating budget of $15 million, the lobby may be Washington’s most influential.

Each year, it monitors more than 2,000 hours of congressional hearings, holds more than 1,000 meetings with congressmen and women or their staff members, and conducts ongoing work with 50 committees on Capitol Hill and 100 federal agencies and departments.

The tobacco lobby? The insurance lobby? The American Association of Retired Persons?

Surprising as it may seem, these are the activities of America’s most effective ethnic lobby: the American Israel Public Affairs Committee (AIPAC). And according to a new USC study, the long and effective histories of AIPAC and three other prominent ethnic lobbies – none of them mentioned in the 1997 campaign fund-raising scandal – illustrate obstacles to limiting outside influences in American politics.

“Ethnic lobbies are so entrenched – and many of their efforts so legitimate – that measures to control influence in American politics can only be expected to have limited effectiveness,” said Richard H. Dekmejian, a professor of political science and the study’s lead author.

Conceived before the 1996 election, “Ethnic Lobbies in U.S. Foreign Policy” shows how the Jewish, Armenian, Greek and Turkish lobbies have gained and wielded considerable influence, often through totally legitimate means. The study is part of a larger research project that eventually will turn attention to Chinese, Korean, Indonesian and Latino ethnic lobbies.

Alleged attempts by Chinese and Indonesian businessmen to influence the 1996 presidential and congressional races with campaign contributions through Asian Americans have raised concerns about the vulnerability of the U.S. electoral process – the most open in the world – to foreign influence.

Despite proposed sanctions demanded by congressional critics, ethnic lobbies can actually be expected to increase in number and influence, the study predicts.

“As long as the United States continues to accept large numbers of immigrants while pursuing a major role in global politics, ethnic lobbies will continue their attempts to influence the foreign policy behavior of the world’s sole superpower,” said Angelos Themelis, the study’s co-author and a freelance lobbyist in Washington, D.C.

To arrive at a detailed accounting of each lobby’s support and successes, the researchers conducted dozens of interviews with lobbyists, politicians and ethnic leaders and analyzed scholarly accounts, lobby publications and government records.

THE RESEARCHERS FOUND that Jewish, Greek and Armenian lobbies operated without financial support from abroad, a distinction that proved key.

“Israel doesn’t spend one penny on the Jewish lobby,” Dekmejian said. “The Greek government doesn’t have money to spend on lobbies and the Armenian government is bankrupt.”

Those lobbies turned out to be entirely supported by America’s 5.9 million Jewish citizens, 1.2 million to 1.5 million Greek Americans and 750,000 Armenian Americans. The study shows the ethnic groups forming and funding political action committees, bankrolling educational efforts, lending support to specific candidates (or blackballing them) and gaining significant victories. Israel proved to be the biggest winner, with in excess of $78 billion in direct aid since the founding of the Jewish state. Current U.S. aid to Israel is more than $3 billion a year.

“Every time the homeland is in danger, immigrants will lobby on behalf of the homeland, and there’s nothing wrong with that,” Dekmejian said. “Americans have the right to petition their government.”

More problematic, the researchers concluded, are ethnic lobbies that receive most of their support from outside the country. Of the four cases studied, only the Turkish lobby fit this model, which somewhat resembles the 1996 campaign fund-raising controversy, they said.

According to the study, the Turkish government has a history of hiring high-powered Washington-based lobbying groups and former U.S. government officials as well as bankrolling academic activities in an attempt to foster “a sympathetic scholarly base” for the country that has been haunted by charges of human rights abuses. In 1994 alone, the Turkish government hired six American-based public relations and lobbying firms at a cost of more than $3 million a year.

Meanwhile, the government-funded Institute of Turkish Studies has given out more 688 grants worth a total of $1.6 million to scholars, students, libraries and conference organizers. Some of the U.S. academics who have received its grants have appeared as expert witnesses before congressional committees in denying Turkish responsibility for the Armenian genocide, which from 1915 to 1922 claimed about 1.5 million lives.

“In the case of Turkey, there’s a government that wants to pursue its interests in this country,” Dekmejian said. “It uses the small Turkish community to lobby in its name.”

Still, clamping down on such activities as academic funding opens the door to bigger problems than influence peddling.

“We’re vulnerable to outside influence because we’re a free society,” he said. “The other side of the coin is worse to consider.”

That does not mean, however, that other institutions are absolved from preventing abuses, he pointed out. “Academia needs to make sure funding is not for propaganda.”

DESPITE THEIR DIFFERENT agendas, the lobbies all turned out to share the same origin: a threat to the stability of the homeland or its people.

The first systematic pro-Israel lobbying effort dates to 1951, just after the state’s founding, and has grown with each threat from inside and outside its borders.

Until Turkey invaded the independent island nation of Cyprus, 82 percent of whose inhabitants are ethnic Greeks, there was no Greek lobby – just a welter of fraternal and regional associations committed to preserving Greece’s cultural and religious heritage.

Similarly, the researchers traced the roots of Armenian activism to 1965, which marked the 50th anniversary of the Armenian genocide under one Ottoman Empire. When anti-Turkey demonstrations in Soviet Armenia resulted in repression, American Armenians emerged from decades of political quietude “with a collective burst of anger and protest against Turkey and its allies,” the study said.

Meanwhile, the Turkish government mobilized America’s tiny Turkish community in 1975 to develop grass-roots support to counter the initiatives of the Greek and Armenian lobbies, the researchers found.

While galvanizing, a common enemy did not prove to be the only requirement for effectiveness. The researchers found that the Armenian lobby has lost some credibility in recent years because of internal disagreements over whether to lend support to Armenian President Levon Ter-Petrossian, who is alleged to have tolerated human rights abuses. Likewise, the failure of successive Greek and Cypriot governments to develop a long-term national strategic agenda with clearly defined national interests has had “a disorienting effect” on the Greek lobby, whose largest victory remains a three-year arms embargo on Turkey beginning in 1975.

The key to success, the researchers discovered, is articulating a common goal that transcends any divisions within the ethnic group.

“Despite a high degree of pluralism of ideas, philosophies and perspectives on Jewish history, religion, culture and destiny, the Jewish community has forged a consensus on the articulation and pursuit of a clear and long-range Jewish agenda of support for Israel,” Dekmejian said.

It also proved crucial for ethnic lobbies to link American and homeland interests. Take Turkey, which once cast itself as a key to containment of the Soviet Union. With the fall of the Soviet Union, the country now has positioned itself as an important stepping-stone to the newly promising Central Asia economies, the researchers found.

“To the extent that an ethnic group succeeds in articulating its specific agenda as a part of the national interest,its lobbying efforts will be accorded legitimacy,” Dekmejian said.

But in a post-Soviet world with an increasingly global economy and high levels of immigration in the United States, demonstrating how foreign interests serve national interests is more often a process of inclusion than elimination, the researchers found.

Translation: To the extent that an interest group can acquire and sustain the essential means of influence, it can translate its foreign policy positions into official U.S. policy.