“Tonight there are three objectives,” said Gen. David Petraeus, who evaluated each pitch, in his opening remarks. “One is to look at these startups. The second is to further the relationships of the people in this room. The third is going to be facilitated by what we’re doing here, and that’s USC’s contribution: It’s what’s known as SCilicon Beach, and that’s with an ’SC.”

And here’s the pitch

Develops a software platform to allow humans to interact with and use technology ranging from smart devices to personal robots through natural communication. (Ross Mead PhD ’15)

The event was organized by Andrea Belz, vice dean of technology innovation and entrepreneurship at the USC Viterbi School of Engineering, and hosted by USC Viterbi Dean Yannis C. Yortsos.

“Andrea has really been the key ingredient for this event,” he said. “She’s the one who’s made this all work in a very, very impressive manner.”

“The Real Deal @ USC” began as an initiative to foster the entrepreneurial spirit of technology and innovation in Los Angeles. In Belz’s words, the event is the “pipeline” from innovation to interest.

“Brands are trying to go after the millennial, but how do you reach a group of people who don’t watch traditional media?” asked Ashley Crowder ’08, MS ’09, co-founder and CEO of VNTANA, who pitched the augmented reality company behind the hologram selfie. “Millennials define luxury as an experience, so collaborating with companies like ours have helped these brands reinvent the way that they communicate.”

At last year’s U.S. Open, VNTANA teamed with Mercedes-Benz to help the brand capitalize on its endorsement deal with tennis great Roger Federer. An interactive Federer hologram appeared in a Mercedes tent during the entire U.S. Open, giving spectators the experience of serving tennis balls to the champ and capturing it all in a shareable video.

“Almost 8,000 people went through the experience, increasing [Mercedes-Benz’s] engagement by 20 percent from past years of their sponsorship,” Crowder said.

Though the entrepreneurs’ pitches were compelling, Petraeus pressed them a bit more.

“As a prospective investor, someone would want to know, do you really think that you have a jump on possible competitors and how high is the barrier to entry to compete with you once people realize what you’re doing?” Petraeus asked Ross Mead PhD ’15, founder and CEO of Semio.

Semio is developing a standardized software platform that would allow humans to interact with smart devices and robots through speech and body language.

“When it comes to competition, a lot of people are working on individual spaces, but no one is working on a holistic approach to this problem,” Mead said. 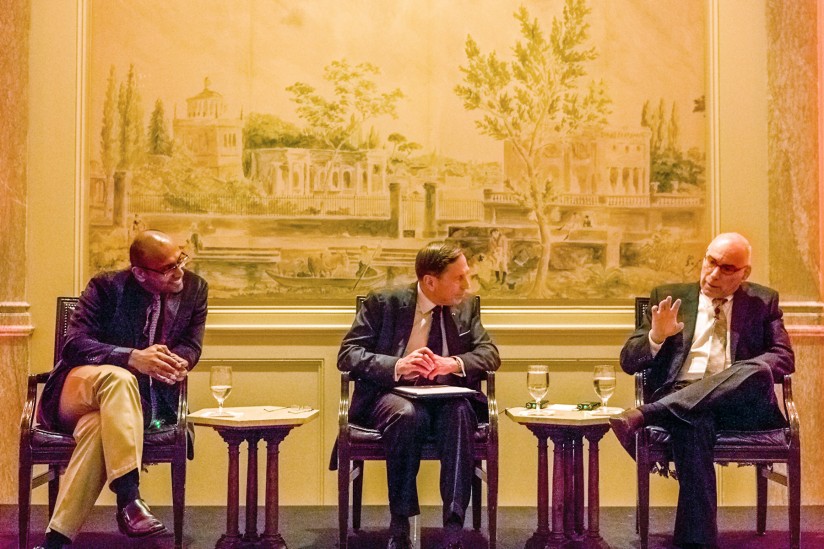 Following the round of pitches, Petraeus led a discussion that focused on artificial intelligence featuring Harel Kodesh, chief technology officer of General Electric Digital, and Rajiv Maheswaran, former USC Viterbi research assistant professor of computer science and CEO of the USC-born startup Second Spectrum, which is expected to be pro basketball’s official analytics and tracking provider by next fall.

“As industry becomes more autonomous, humans will have to look at a higher lever of functionality to operate,” Kodesh said. “Twenty years from now, AI may take over flying planes, but we’ll still need humans to program and organize that intelligence.”