On June 7, President Barack Obama nominated Major Gen. Stayce Harris ’81 to the post of assistant vice chief of staff and director of the air staff for the United States Air Force. When the Senate confirmed her appointment in August, Harris became the first female African-American to ever achieve the rank of lieutenant general.

Harris received a commission in the Air Force through USC’s Air Force ROTC program and served on active duty until joining the Air Force Reserve in 1991. A command pilot, she has flown more than 2,500 hours in military aircraft and more than 10,000 hours in civilian aircraft.

She previously served as commander of the Air Force Reserve’s 22nd Air Force at Dobbins Air Reserve Base in Georgia, where she commanded more than 15,000 citizen airmen, 105 unit-equipped aircraft and worldwide operational missions, including specialized hurricane hunter, fire suppression and aerial spray missions.

What inspired you to join the Air Force?

I was born in Los Angeles. My father was career enlisted in the Air Force, so I grew up as a military brat. Basically, I’ve been serving ever since I was born. In my mind, all I wanted to do is grow up to be just like him. When I was 8 years old, I’d watch my dad go to work every day in a light blue shirt and dark blue pants, but I didn’t have a clue about his actual job in the Air Force. All I knew is that every two years, we’d move to another exotic location. And that’s what I enjoyed — the ability to travel the world. It wasn’t until I entered high school and started taking Junior ROTC that I knew I had the propensity to serve and wanted to be an airman.

When you entered high school, your family settled in Fayetteville, N.C. What was that like? And why did you leave Fayetteville after graduating?

My father had retired by then and we moved to Fayetteville to be close to the family home state of North Carolina and Pope Air Force Base. His retiree benefits allowed him to enroll at Fayetteville State University to pursue his undergraduate degree. So it turned out that my father and me were freshmen, sophomores, juniors and seniors together. He was in college; I was in high school. And I worked very hard to do well in school so I could be eligible to have a scholarship paid by the Air Force that allowed me to go to USC because otherwise I wouldn’t have been able to afford to go to USC.

I’ve always loved math and I was trying to figure out the best course of action to serve in the Air Force. At the time, the Air Force was offering scholarships for those who wanted to be engineers. So I thought, why not an engineer? I had a fair idea of what an engineer did. Initially, I thought I would be a chemist or some type of scientist, but the Air Force offered an opportunity to be an engineer and it just opened up an abundance of opportunities from there on.

For me, industrial and systems engineering brought together engineering, technology and how to put them to human use — the ergonomics of design, especially, and robotics. So when I graduated in 1981, ergonomics and robotics were on the forefront. And I just found that fascinating. You know, you can design the perfect car, but what dials do you display and where and how far do you place them? That type of ergonomics engineering just fascinated me.

I thought I would do that type of work in the Air Force until I had an ROTC instructor speak to me about becoming a pilot and that opened up a whole other world of opportunities.

Take us back to your time at USC. How would you describe your experience?

I loved my time at USC. I’m a diehard Trojan. If you saw my office, you would see a bobblehead of Marcus Allen; you would see a Trojan cup. My friends always give me ’SC stuff to put in my office. But I’m most proud of the university and how it continually cares for its alumni, especially veterans, and how important that networking relationship is. That’s the same type of thing that we have in the Air Force, you know. We’re a community that cares for each other, and you’re always a member of that community. And I feel the exact same way about ’SC. I am always a Trojan, always welcomed and I have that network of friends and colleagues that I can interact with and reach out to.

Describe a moment when you failed. What did you do? How did you rise from that and what lessons did you learn?

Life is full of failures. In pilot training, which was a very demanding process, there would be times when I’d fail a ride. But you only get three, maybe four, opportunities to fail a ride before you’re eliminated from pilot training. So when I did fail, it was my survival opportunity. To pick myself up, to study more, to learn the techniques better or just fly a better aircraft to ensure I was worthy of becoming an Air Force pilot. So for me, it was daily perseverance, which is now kind of my hallmark. I always tell people persistence pays off. You’ve got to really want it and you’ve got to work hard for it. And you have to let people know that you do want it. Because if you show a drive and a passion toward a goal and you’re willing to work for it, then others are willing to work with you and for you in achieving that goal.

The coolest one for me was the [Northrop] T-38 Talon. It’s the second aircraft you fly in pilot training and can go supersonic. It was like strapping a rocket to your body. Incredibly maneuverable — we still fly it to this day — but totally the most fun. Part of completing training is to fly solo flights and so I remember soloing the T-38 on my birthday in 1984. Just the greatest thrill of all!

As far as heavy aircraft, you may or may not know that I’m also a pilot for United Airlines currently on a military leave of absence, but the plane that I absolutely adore, as far as heavy aircraft, is the [Boeing] 747-400 — just a magnificent four-engine jet that once again is very maneuverable for its size. It weighs 875,000 pounds, so it’s a lot of plane but just a dream to fly.

How do you deal with the stresses of the job?

First of all, I have magnificent friends. Then there are things that I enjoy doing. Number one, I love to travel around the world while attending jazz festivals. That’s how I spend my recreation: traveling, jazz, scuba diving, skiing — you know, activities that free my mind but still have some adventure to them.

You’ve achieved many distinctions and a long list of firsts, but what is the thing that still humbles you to this day?

Hearing back from the airmen that I served with and have led and have mentored. Being part of something greater than yourself is wonderful. Being able to mentor those that will follow in your footsteps and paying it forward through them —that to me is the most humbling and rewarding. Being able to take care of airmen, to watch them thrive and grow and want to do the same for others. It’s what we call being a good wingman. It’s part of the Air Force core values, taking care of each other. For me, especially when I’m flying on larger aircraft with a crew and everybody on that crew is important, you have to take care of each other. It’s part of the fabric that becomes you. 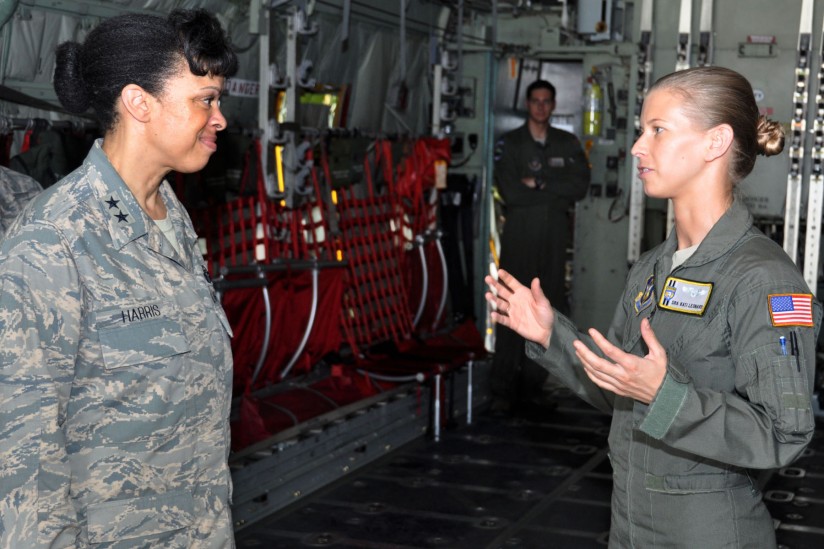 Harris chats with a colleague. (Photo/Courtesy of U.S. Air Force)

How often do you get the chance to speak to young women who aspire to be aviators? What do you say to them?

I do it on numerous occasions whether it is one-on-one mentoring with someone who is interested in flying or whether I’m addressing Junior ROTC or ROTC units. But I tell people the same thing. Number one, find your passion and be persistent in your goals. Define and develop your goals. And then learn everything you can about what you want to do. But then keep plugging through it because failures and setbacks do happen. It’s all a part of the growing process to make you better in the end. There’s goodness in adversity. It shows your mettle and how much you truly desire to become what you want to become.

I go out to high schools and aviation summer camps and meet a number of young women who aspire to fly. It’s nice to see that because in the early ’80s, flying was not typical for women. Now it’s wonderful to meet a young woman who tells you: “All I’ve wanted to do, ever since I was little, is be a pilot.” I think that’s amazing to see them realize that there are no barriers. All you have to do is to help them and encourage them to follow their dreams because the opportunities are there.

We currently suffer a shortage of female engineers as well as female Air Force pilots. What are some of the things you would like to do to change that and where do you think the focus should be?

The focus should be reaching the youth early, as early as elementary school, to inspire them to pursue STEM career fields. We need to make it exciting, have them perform experiments that will pique their interests. You know when you become an engineer, you’re helping design the world. And the future technologies that will make our world better. How absolutely wonderful it is to be a part of that enterprise!

You’ve gone further than your father has gone or perhaps even dreamed of going in the Air Force. What do you think he’d say to you now had he witnessed your trajectory and ascent?

My father was with me up until 2002, and he knew that I had graduated from ’SC, that I had become an Air Force officer, a pilot, a commander, had gotten off active duty to become an airline pilot and then enter the AF Reserve. Then right before he passed, he knew that I had achieved the rank of colonel in the Air Force. He was very, very proud. I used to take my dad traveling with me on my trips just like he used to take me when I was younger. Everybody knew my dad and my dad knew no strangers. When my friends found out that I was going to be promoted to general officer, they all said: “Clyde’s smiling down right now. He’s so proud.” I’m sure he would be.

They met on their first day at USC; now they’re Army officers and run a near-million-dollar startup

COMMENCEMENT 2022: This month, Brian Femminella and Lucy Schafer will receive their diplomas, become military officers and continue to work on their music therapy app.