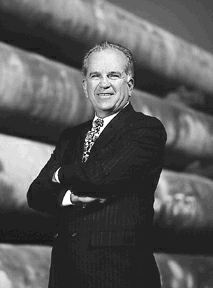 Ronald N. Tutor’s gift to the School of Engineering will enhance the university’s commitment to its strategic initiative on undergraduate education.

RONALD N. TUTOR, president and chief executive officer of the Tutor-Saliba Corp., one of the largest general contractors in the United States, has given $10 million to USC’s Building on Excellence Campaign.

The majority of his gift will go toward construction of the Ronald N. Tutor Engineering Academic Center, a four-story undergraduate instructional building and research center on the University Park Campus. The center will feature 60,000 square feet of instructional space and a 24,000-square-foot research lab.

“Ron’s generous gift comes at a time in the school’s history when we are focusing on improving the undergraduate experience in engineering education,” said Leonard M. Silverman, dean of the school. “He shares our vision for the future of engineering instruction and research, and his commitment to bringing our vision into reality is greatly appreciated.”

Tutor has built the Tutor-Saliba Corp. into a major force in the United States heavy-construction industry: The firm ranks as one of the 10 largest heavy-construction companies in the country and is the sixth largest in transportation.

THE TUTOR-SALIBA Corp. has played a dominant role in the construction of the Los Angeles Metro Rail, having been awarded more than $700 million in tunnel and station construction contracts. The company has participated in numerous other major construction projects, including those for San Francisco Muni-Metro Rail, the San Francisco Airport Rail Transit (ART) Guideway, Phases I and II of the Ventura Freeway reconstruction, the Pittsburg to Antioch extension of the San Francisco Bay Area Rapid Transit (BART), the Los Angeles Central Library, the San Diego Convention Center and the Tom Bradley International Terminal at Los Angeles International Airport. The university’s Seeley G. Mudd Building and a recent addition to Heritage Hall were also built by Tutor-Saliba.

“I have always believed that the engineering school has the potential to become one of our country’s truly great centers of engineering research and teaching,” said Tutor, explaining his largesse, “and the school’s progress over the past five years supports this conclusion.

“My 50-year love affair with USC began in childhood, was fanned during my education there and continues through my long-term association with the university. With continuing good fortune in business, I am just so pleased to be able to share that gift with my alma mater.”

“USC is indeed fortunate to have the benefit of Ron Tutor’s support and leadership,” said President Steven B. Sample. “He has been generous to the university in many ways over the past several years, but this gift will ensure that USC’s engineering students and faculty can pursue their work in a facility of unparalleled quality.”

TUTOR ALSO SERVES as chief operating officer and director of the Perini Corp., a construction firm based in Framingham, Mass. He is a board member of the Southdown Corp., the largest non-foreign-owned producer of cement in the United States, and a member of the American Concrete Institute.

He is a member of the advisory committee of the School of Engineering’s department of civil engineering and Cardinal and Gold.

In 1991 Tutor helped to raise more than $5 million to revitalize and re-equip the engineering school’s department of civil engineering. In recognition of his efforts, he was awarded the USC School of Engineering Award for Outstanding Service.

Tutor earned his bachelor’s degree in finance from USC’s Marshall School of Business in 1963. His daughter Tracy is a senior in the School of Theatre, and his daughter Kristin is a freshman in the College of Letters, Arts and Sciences.