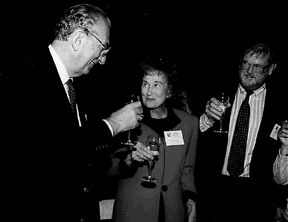 Two days of celebration and science at USC last month marked dual milestones: the 20th anniversary of the Loker Hydrocarbon Institute, and the 70th birthday of its director, Nobel laureate George A. Olah.

President Steven B. Sample welcomed some of the world’s top chemists to USC Nov. 20 to join in a wide-ranging tour of “New Horizons in Chemistry,” a two-day series of discussions on the frontiers of the discipline. The lineup of presenters included scientists from Japan, Germany, the Netherlands, Australia, France, Canada, Sweden and Taiwan.

The common thread joining this exceptional group was Olah – almost all present were former students, postdoctoral fellows or collaborators.

That evening, the chemists and other institute friends gathered at the Davidson Conference Center Embassy Room for a banquet dinner honoring Olah and Katherine Bogdanovich Loker, the philanthropist who has supported from the start the unique center in the heart of the USC campus.

The institute, founded in 1977 with a keystone donation from Katherine Loker and her husband, Donald P. Loker, opened its doors in 1979. With continuing support from the Lokers and others, notably the late Harold E. Moulton and Dr. Carl M. Franklin, USC emeritus vice president, it thrived, more than doubling its size with the addition of a new wing named after Katherine Loker.

While hydrocarbons – natural substances found in petroleum, natural gas and coal – are critical to almost all aspects of a modern industrial economy as fuels, plastics, and even pharmaceuticals, the Loker Institute is the only facility devoted exclusively to their study.

Olah and other Loker chemists have produced a continuing flow of research, both as basic science and as applied chemistry, which has led to such important results as an environmentally benign process for making high-octane unleaded gasoline.

Loker chemists are now at work on such challenges as recycling carbon dioxide from the air to create synthetic fuels, both conserving stocks of petroleum and helping to avoid global warming by recycling.

Similarly, a new design for a fuel cell – developed jointly with the Jet Propulsion Laboratory in Pasadena – that converts the common and cheap chemical methane directly into electricity is now being brought to the market.

Other Loker chemists have found new ways to make crucial raw materials for drugs and pesticides. Loker researchers are also studying ways to make hydrocarbon-derived organic material usable in electronic applications that have traditionally required semiconductors, and to find ways to get molecules to assemble themselves into submicroscopic machines and devices.

“The atmosphere of learning and discovery at the institute is in the true tradition of a great university,” Katherine Loker wrote in a special 20-year institute conspectus. “I am particularly gratified that the discoveries made here have had a profound impact through the world. It is indeed a privilege to be part of it.”

A Dual Celebration for the Loker Institute’s 20th and Nobel Laureate George A. Olah