Political debates involve both performance and policy, so why not have experts in both fields provide insights? That was the thinking behind “Politics as Theatre,” a live screening of the third and final presidential debate Wednesday night with a panel of experts from the USC Price School of Public Policy and the USC School of Dramatic Arts.

More than 160 students packed a Lewis Hall auditorium 45 minutes before the debate to listen to panelists gave tips on watching the Hillary Clinton-Donald Trump faceoff in terms of apparel, vocal inflections and spin of narratives, among other considerations.

Haatainen-Jones led off, observing that Clinton’s wardrobe choice must be feminine but also convey that she can maneuver in a man’s world. She can’t wear too much jewelry or anything frilly, and showing even a quarter-inch of cleavage would set off a firestorm.

Trump likes a bit of sheen in his suit fabrics, as it looks good in the lights, she said, and favors very long ties to avoid any gap between his tie and belt. 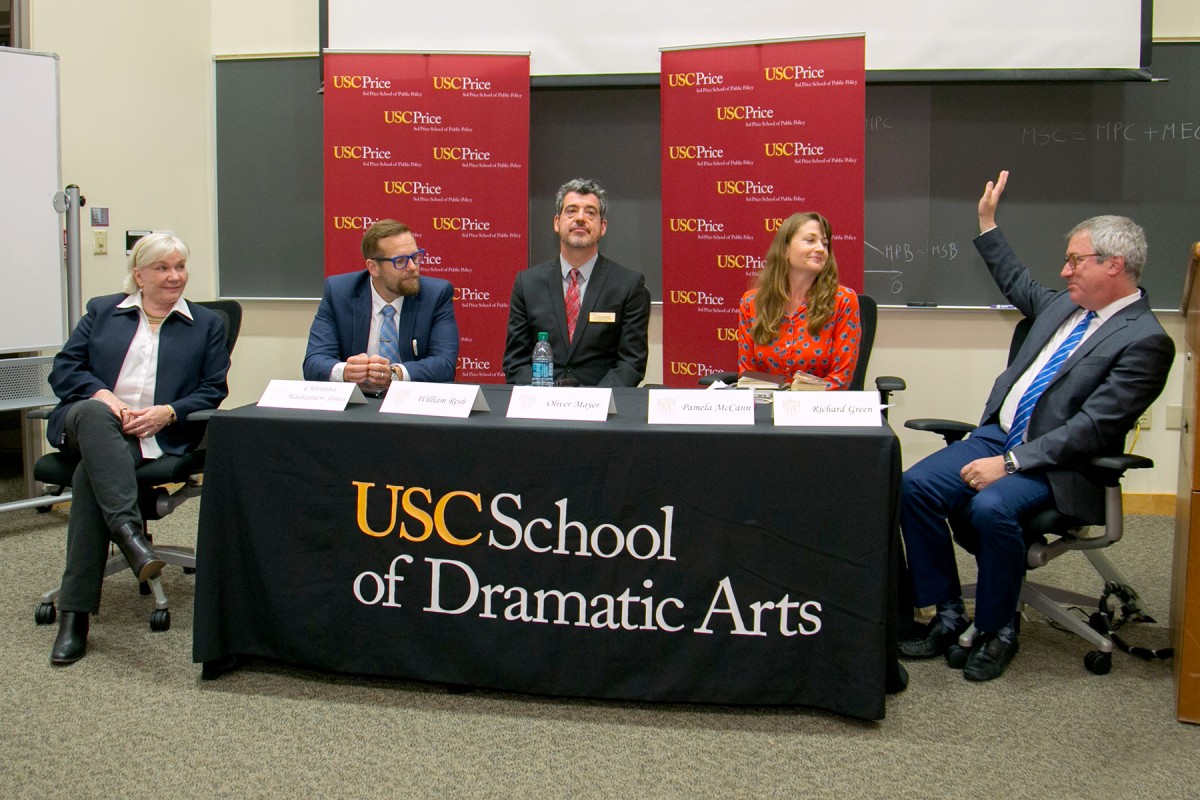 Mayer told students to be aware of the plot points of each candidate’s story that are emphasized. Those are deliberate choices, he said. He marveled at Trump’s ability to create “a word salad” with a charismatic delivery.

“If you look at the transcript, it’s disjointed and surreal, but he can pull it off,” Mayer said. By contrast, “Clinton’s speech has a prosaic quality verging on the repetitious.” Hers is not the soaring rhetoric of Barack and Michelle Obama, he said, but Clinton gains authority by being willing to say something more than once.

He urged watchers to be alert for “sniffing and shimmying,” and the candidates’ proximity to each other in the moments when they wouldn’t be shown on a split screen. “This is Vegas and it does bring to mind the great fights,” Mayer said.

Haatainen-Jones pointed out how in the second debate, the cameras pulled back from closeups to show the stage movements of Trump and Clinton, revealing Trump’s hovering.

“It was more theatrical and created quite a bit of tension. Wonderful theater,” she said.

Resh noted that the previous two debates have said very little in terms of management issues or styles. Although modern administrations have centralized more power in the White House, there is still turf protection and ambitious players in agencies who don’t always share the president’s proclivities, he noted.

McCann agreed with the dearth of debate discussion on how candidates would govern, and said that Trump never mentions working with Congress, governors or federal agencies. She noted that debates typically move the allegiances of only 1 to 2 percent of voters, but since this election is so unique, that may not hold true this time.

“My hope is we accept other’s viewpoints in a way that is less rancorous,” she said. “Has there ever been an election like this?” 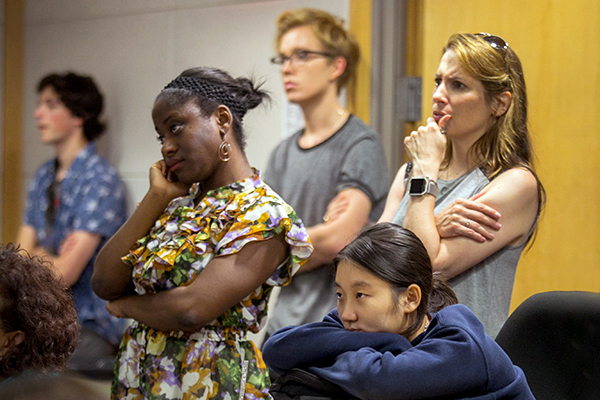 “I think that implies that we are headed toward civil war,” McCann replied.

Before the debate began, students were handed out “Presidential Debate Bingo” cards where they could check off 2016 campaign buzzwords and actions such as “TPP,” “Alicia Machado,” “someone demands an apology,” “Vladimir Putin” and “Clinton mentions children — any children.” Students were gleefully checking off their cards during the 90-minute debate, some filling in every space.

One term that wasn’t included — “bad hombres” — elicited groans from the crowd after Trump said it.

When the telecast ended, the panel reconvened, did a quick postmortem and took questions from the audience.

Green asked for a show of hands from anyone whose mind had been changed by the third debate. Not one hand was raised.

All panelists agreed there was one clear winner: debate moderator Chris Wallace of Fox News.

Green asked how revealing the split screen was in showing each candidate’s reaction to the words of the other. Mayer noted that the Greeks performed with masks, and both candidates employed their go-to masks while the other spoke. Trump favored his pugnacious mask, while Clinton’s mask was one of quiet authority and dignity, with long-suffering expressions.

Haatainen-Jones said Clinton smiled more than usual, which she felt was rehearsed. She also noted that the lighting was harsher on Trump than on Clinton, which she attributed to the differences in their height. “The light was hitting at the top of her head, but he was getting it right in the face.”

As for policy analysis, Green said he was irked by Clinton saying she would not add a penny to the national debt. Even if there is no net gain in spending, “we will still have interest” to pay on existing debt, Resh noted.

Trump’s solution of 4 to 5 percent GDP growth is also unrealistic, Green said. I normally don’t do predictions, he said, “but we are not going to have 4 percent growth per year.”

McCann said she thought the debate section on entitlement spending was particularly unsatisfying. The president can want changes, but changes in entitlements are tricky things to get through Congress, she observed. Clinton could have mentioned her experience in getting legislation passed, but Trump completely ignored that this is part of the process, McCann said. “Does he not realize this?”

“He thinks one senator can pass laws,” Resh replied.

Asked about the most striking thing said at the debate, Mayer replied that it was Trump repeating several times about “ripping the baby out of a woman’s body. 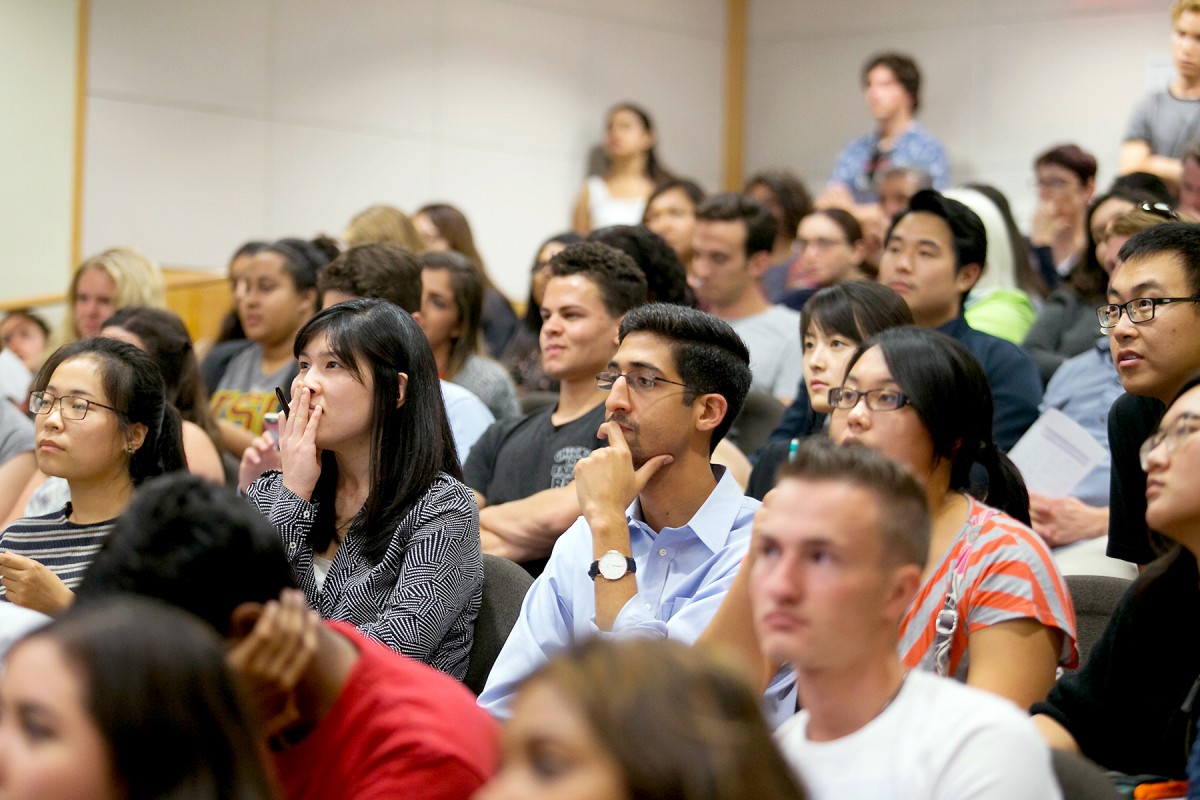 “It was deliberate and prepared, and meant to make all of us squirm.”

Resh said that this extreme rhetoric was Trump motivating his base. McCann agreed, saying he was reminding conservatives about his views on abortion, hoping that even though they might disagree with him on other issues, his anti-abortion stance would be enough to earn their votes.

McCann said she had been worried about appearing on the panel, wondering what a political scholar could bring to a discussion of the theatrical spectacle of a debate. But in preparing, she realized that the debates signal a climax to the campaign and the coming of an important resolution.

Said Haatainen-Jones: “I would love it if everyone in the country bases their vote on policy decisions, but they work more viscerally, and that’s where theater comes in.”

Concluded Mayer: “The training of theater professionals is essential for an understanding of politics. The knowledge of how to move people and how to be heard are some of the most profound things we can learn.”

The USC Polarization Index shows immigration remains the most divisive topic in the first quarter of 2022, while the war in Ukraine is the most discussed.