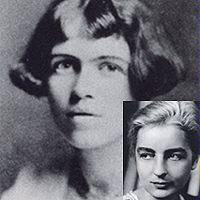 What she uncovered was an intense love relationship between Mead and Benedict that shaped both their research and their personal experiences.

Weaving the thousands of documents together, Banner has written the first biography of Mead and Benedict, “Intertwined Lives: Margaret Mead, Ruth Benedict and Their Circle” (Alfred A. Knopf, 2003). This is the first work to include previously restricted private letters and papers of Mead and Benedict.

With access to the complete archive of the two women – including the hundreds of letters opened to scholars in 2001 – Banner illustrates how Mead and Benedict responded to the social and political events of their time.

She also delves into the scholars’ complicated relationship, which began at Barnard College in 1922, while Mead and Benedict were a student and teaching assistant, respectively. Benedict was 15 years older than Mead.

“I wanted to look at both their personal and professional relationships, as well as their intimate circle of friends,” said Banner, a professor in the USC College of Letters, Arts & Sciences.

“These are two of the greatest women intellects, who had enormously hidden lives. Though they both were married – and believed very strongly in marriage – they were lovers. They had a very intense union.”

Banner examines their relationship in the context of family, friends, husbands, colleagues and their era’s events.

“Both Mead and Benedict believed in free-love doctrines that called for sexual experimentation and prohibited jealousy,” Banner said. “Both believed in marriage and feared their relationship could compromise their careers. They never took a photo together. The 25-year relationship was quite difficult and filled with problems. But they remained together and as friends until Benedict died at age 61.”

How important they were to one another’s research is unquestionable, Banner said.

“They modeled themselves on one another,” she said. “Their work was very much a conversation with one another. The friendship enabled them to have confidence in an academic and intellectual world that was controlled by men. It doubled their ability to take on the research.

“If they had never met, I’m not sure either would have made such a great mark,” Banner said. “That’s how important they were to one another.”

Benedict and Mead were modernists, and, as anthropologists, they considered themselves scientists.

“Accuracy was their standard,” Banner said. “However, they were theorists and did run the risk of stressing part of their material and not its entirety. Both were passionate, committed to their own arguments, hoping to find scientific truth.”

Mead, who looked at technology as the future, is widely known for her best-selling books “Coming of Age in Samoa” and “Sex and Temperament in Three Primitive Societies.”

“Mead correctly thought that technological innovations would be the determining factor in shaping the future,” Banner said. “She understood the importance of inventions, such as the computer.”

Benedict studied the relativity of cultures. She looked at how society defines deviance – including mental illness, criminal activity and juvenile delinquency.

“She was critical of American psychologists because she believed they measured one’s competence by Western culture rather than globally,” Banner said.

Benedict published the landmark studies “Patterns of Culture,” “Race” and “The Chrysanthemum and the Sword.”

“If Benedict had lived longer, she would have equaled Mead in research and notoriety,” Banner said.

Banner has written eight books; “Intertwined Lives” is her first biography of historical figures. She has taught history at USC since 1983.

“These women are heroic,” Banner said. “They really constructed lives and selves that were operational and admirable.

“As a biographer, you have a responsibility to let the reader interpret for themselves the subtleties of what happened. Everyone reads and interprets in the context of his or her own life.”