U.S. Secretary of Education John B. King Jr. announced long-awaited rules governing teacher preparation on Oct. 12, using the USC Rossier School of Education as a backdrop to put forward the result of a years-long process.

The new regulations are tied to the Department of Education’s goal of improving accountability in higher education as it relates to existing standards for teacher-preparation programs.

King and Undersecretary of Education Ted Mitchell remarked on the regulations at a roundtable of faculty, teachers and other education leaders held after a morning tour of USC Rossier. The tour included a visit to an on-campus class and a session with an online class.

We need to make sure that teacher preparation equips teachers with the skills to be as effective as possible in their classrooms.

“There’s a sense of clarity the president has — and that Ted and I have — that teachers can save lives,” King said at the roundtable. “We need to make sure that teacher preparation equips teachers with the skills to be as effective as possible in their classrooms.”

The new rules, designed under the Higher Education Act, are meant to heighten accountability of traditional certification, alternative certification and online programs. Some major changes include:

The regulations will also be used to track how many graduates of programs are going into high-needs schools. 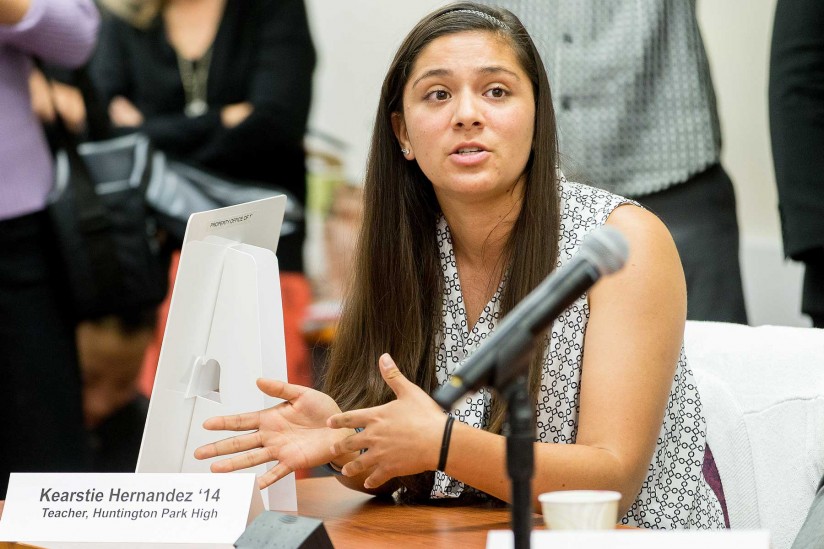 Chemistry teacher Kearstie Hernandez explains the many responsibilities she has taken on as a new teacher at Huntington Park High. (Photo/Joshua Hoover/U.S. Department of Education)

The release of the new rules is a victory of sorts for the Education Department. First put forth for review in December 2014, the finalization of rules had been delayed multiple times, including due to a wave of harsh criticism about earlier drafts. The most recent delay came in April so that the department could collect public comments specifically related to how to apply the regulations to online teacher-preparation programs.

USC Rossier became a powerhouse in online teaching in 2009, when it signed a multiyear contract with education technology company 2U; 2U provides the platform serving three of the school’s online master’s and doctorate programs. In April, the school and 2U renewed their contract through 2030.

“You can see from what’s happening at USC that there are great examples of tremendous leadership throughout the state,” King said after the roundtable. “And really this is an opportunity for states to leverage best practice. There’s no problem we face in education that isn’t being solved somewhere, and the question is: Can we scale those solutions? And there’s an opportunity here to do that.”

Undersecretary Mitchell noted that institutions like USC Rossier — notably, those in diversity-rich states like California — will be instrumental resources for states.

“The feedback loop is not only internal, but it’s across institutions,” Mitchell said. “Collaboration between teacher-preparation organizations is one of the ways almost everybody thinks we can use to move forward.”

USC Rossier Dean Karen Symms Gallagher said the regulations are one important step on the path toward improved teaching.

“One of the keys is always implementation, and it’s going to be a challenge. And we need to be mindful that it’s not just preparation, but induction and retention that are a major part of this work,” Gallagher said. “It’s great that states will have flexibility to create systems that work for them, and we at USC Rossier hope to be a leader in our state’s efforts.”

The department officials highlighted such flexibility, noting that there are not always obvious ways to evaluate teachers. An illustration of that point: One roundtable attendee, Kearstie Hernandez MAT ’14, is a science teacher at Huntington Park High School, but she is also the science fair director, safety coordinator, girls’ basketball team coach, assistant athletic director and professional development committee member.

While the regulations have already come under criticism for concerns about cost and effectiveness, others have hailed them for taking strong steps toward fixing an integral aspect of teacher quality.

“In our view, the final release of these regulations represent a major victory in the transformation of our educator-preparation system,” said Ben Riley, founder and executive director of Deans for Impact. His organization, of which Gallagher is a member, has been a strong proponent of increased accountability in teacher training. “The release of these regulations is a chance to make educator preparation more meaningful and rigorous — leading to better-prepared teachers and better outcomes for children.”

Fighting to improve the well-being of people with HIV

David “Jax” Kelly, a student in the online Master of Public Health program at Keck School of Medicine of USC, is honing his expertise in fostering healthy communities to further his role as a champion and counselor.

As a chief architect at Microsoft, John S. Moh helps teams engage more authentically by improving collaboration and communication. Skills he learned online through USC Annenberg helped him do the same.

A very nontraditional career path: From the military to entertainment to business

Trojan Robbi Spencer has made the most of her diverse experience by combining her business background with her interest in psychology.

Trojan works to increase affordable housing in the Heartland