Ask Victor Webb why he volunteers his time to mentor and support USC students, and the retired adjunct professor has a simple, personal answer.

“These kids are me,” he said, remembering his own journey out of the segregated neighborhoods of 1940s Chicago to become the first in his family to go to college. “We have to do what we can to get these kids opportunities that can change their lives.”

The students are part of a select group called USC Caldwell Scholars. The Dr. Russell L. Caldwell Neighborhood Scholarship Program, run by the USC Retired Faculty Association, gives partial, merit-based scholarships to minority students from high schools near the university. It’s one of the longest-running community-designated scholarship programs at USC.

Webb, who co-chairs the program with Associate Professor Emerita Kaaren Hoffman, serves as emcee at biannual lunches that bring together scholarship recipients — all first-generation college students — with the retired faculty and staff who support them.

The personal interaction with the students resonates with the retirees, who offer mentorship as well as financial support.

At the most recent lunch in September, Webb greeted each attendee with a warm smile and an impressive recollection of names and personal details. He worked the room, making connections between the recipients and the faculty and staff.

It felt like a family meal, the sort of ambience purposefully cultivated by Webb and his colleagues. Faculty members peppered the students with questions about their successes and challenges, which the students readily answered.

Mousael Louis, a USC sophomore from Dorsey High School, told the group how she switched gears from studying mechanical engineering to nonprofit organization and philanthropy.

“Engineering didn’t align with my interests that well,” she said. “I wanted to do more work with people and particularly focus on mental health issues.”

Louis’ switch in interests sparked a personal connection for Hoffman, whose own career in psychology drew her to volunteer service at Mental Health America of Los Angeles. Hoffman invited Louis to accompany her to an upcoming board meeting of the nonprofit, which advocates for the mentally ill and provides them with vital services.

Hoffman enjoys looking for ways to give students practical experience. “We love to help them advance their careers and explore what interests them, when we can,” she said.

Louis accepted the invitation, ready to network and learn firsthand about their outreach programs as well as the challenges of a running a nonprofit. The retired faculty members are warm and encouraging, she said. “They check up on me and make sure I am adjusting well to USC.”

That deepening relationship between retired faculty and staff and the students they support was part of the vision of the late USC Professor Russell Caldwell MA ’33, PhD ’48 when he first challenged his colleagues to foster the USC-to-neighborhood relationship by providing scholarships for local students.

Caldwell, a professor specializing in American history, was a resident of South Los Angeles during the Watts Riots. The civil unrest inspired him to start the scholarship fund as a small step to address the area’s problems. He invited his colleagues “to join in this positive kind of demonstration” by giving $5 a month toward scholarships for worthy students living in the areas surrounding the university. 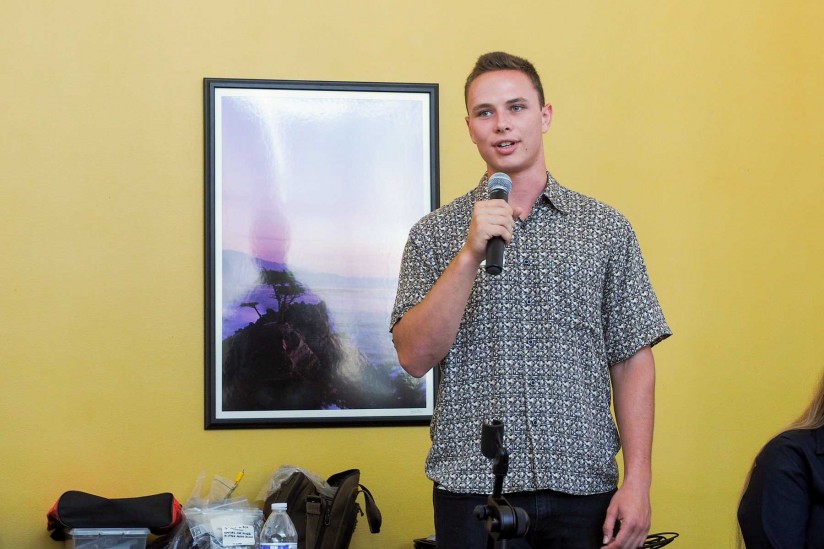 William Russell Moon, whose great-grandfather is donor Russell Caldwell, is a sophomore studying at USC. (Photo/Courtesy of Calvin Lau)

Since then, the program has supported more than 400 minority students from high schools surrounding USC and raised more than $1 million from current and retired faculty and staff with help from USC’s financial aid office.

Though Caldwell passed away in 1979, his legacy has lived on through the faculty members who renamed the scholarship in his honor, and through his family members who regularly attend the lunches to interact with the students. Granddaughter Caron Caldwell attended the lunch with her mother, Terri Caldwell, and her son, William Russell Moon, now a sophomore at USC.

“I frequently say my family bleeds cardinal and gold,” Moon said. “That started with my great grandfather.”

“It’s a truly inspiring and humbling experience to hear their stories,” he said.