Most awards in the film industry celebrate a product a few years in the making. When Matt Cordner ’97 won an Academy Award for technical achievement in 2013, however, the Academy of Motion Picture Arts and Science honored efforts that took place over more than a decade.

Cordner and his colleagues J.P. Lewis and Nickson Fong received their award for the invention of pose space deformation (PSD), a technique that allows effects artists to animate movement. Or as Cordner said, “it helps things look more realistic.” The team began developing the technology in 1999.

“Since it had been 13 years since I developed PSD, winning the Academy Award came as a total surprise,” said Cordner, who earned his degree at the USC Viterbi School of Engineering.

PSD has become an industry standard used in Hollywood blockbusters such as Transformers and The Avengers, complete with its own Wikipedia page.

“When you bend an arm in real life, the skin folds around it. Software, by default, doesn’t know how to do that,” Cordner said. “PSD allows artists to fix an animation instead of mathematical engineers.”

For someone who made a key contribution to the artistic world, Cordner began at a rather technical starting point.

“I began at USC signing up for industrial and systems engineering, but I had always really enjoyed computer science and programming. Even though I thought I enjoyed it too much, I ended up switching to CS,” he explained. 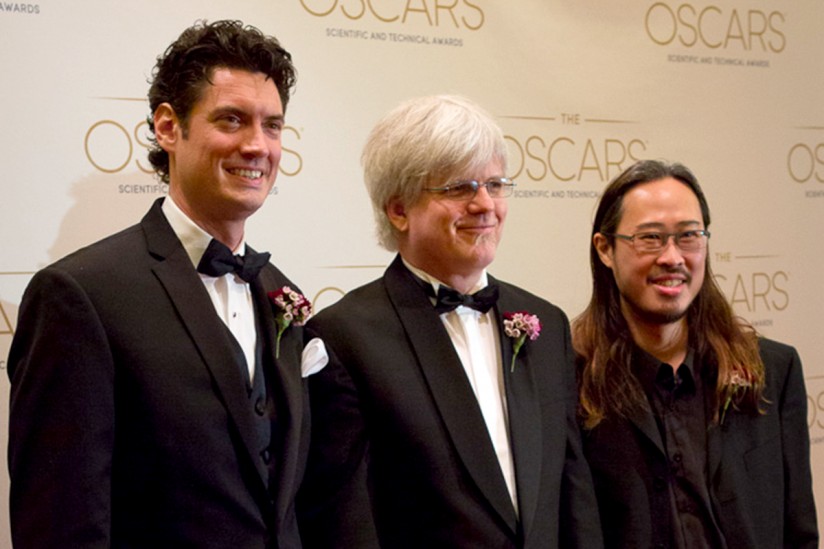 Cordner had planned to work for a disk-drive company after graduation, until a USC Trustee Scholars lunch changed his life path.

“I met Steven Puri, the president of a special effects company, Centropolis FX, and after talking to him about what the company did, I just asked if I could have a job. After interviewing there, they hired me and since then, I’ve been doing CG effects,” Cordner said. “Because I didn’t really know anything about computer graphics, I was learning on the job, but I eventually got promoted.”

His first project was Godzilla in 1997.

It was at Centropolis FX where Cordner began the development of PSD, which SIGGRAPH, the annual computer graphics conference, initially rejected. Eventually SIGGRAPH accepted the technology, allowing other engineers and effects artists to adopt and perfect it, leading to industry interest and his 2013 award.

“Because my first employer was a USC alumnus who I connected with at that Trustee Scholars lunch, in a way I owe my entire career to USC,” Cordner said.

Cordner now works at Blizzard Entertainment, where he designs and animates “anything that’s not a character but still needs animation.”

He has embraced the dichotomy of engineering and art, which he referred to as the “beautiful duet” of “two of the most defining forces of the human experience” in his Academy Award acceptance speech.

“It’s definitely artistic, but it’s much more technical,” Cordner said of his work at Blizzard, which he alternately characterizes as a process and a problem to tackle. “It’s not a straightforward design or algorithm. You have to use both sides of your brain to get that final animation.”