The 14-year-old was standing in front of hundreds of people in a packed room at East Los Angeles College, a microphone hot in her hand.

She had a question for former NASA astronaut Carlos Noriega and OBGYN Diana Ramos: how, as a female and a Latina, could she avoid stereotyping as she pursues a career in STEM — science, technology, engineering and math.

“My seventh-grade teacher inspired me. She told me there aren’t a lot of women in STEM careers,” said Aragon, who lives in Lincoln Heights. “I want to change that, but I’m not sure [how].” 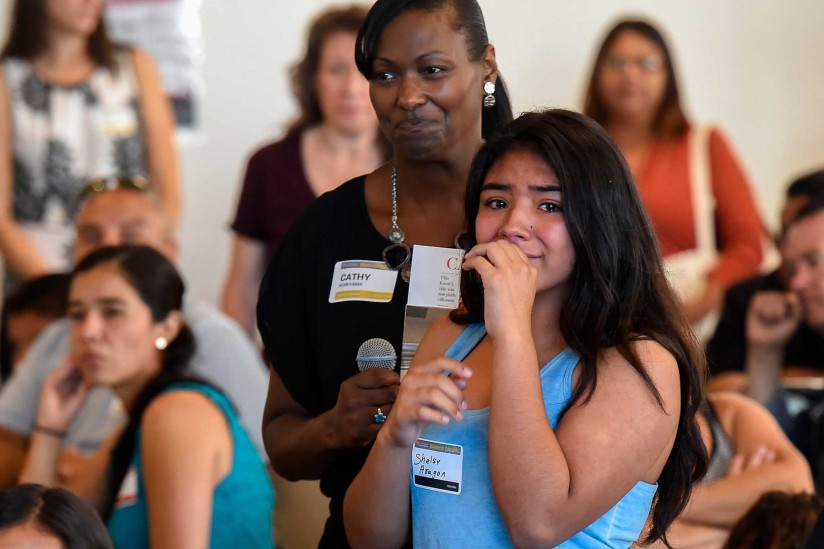 “Mija, you have already done it by standing up to talk,” Ramos responded.

Then the room broke into applause. Aragon broke down in tears.

Aragon was there with her family on Saturday for Preparing for the Biotech Decade, a free bilingual community event put on by USC, aiming to engage the communities of East Los Angeles on all things STEM.

Local families came to hear a discussion between Noriega and Ramos, moderated by Univision’s Gabriela Teissier, and attend workshops on biotech jobs and planning for a STEM education.

Trojans Noriega and Ramos gave advice on forging ahead in STEM — even when there are naysayers or bumps along the way.

“The only doors closed are the ones we refuse to open,” Noriega said.

Aragon said the event gave her a push in the right direction.

“It inspired me a lot because I grew up in a community that always brought me down, being a woman of color,” she said, tearing up again. “I want to change that — that percentage, that stereotype. I always told my parents: ‘Mom, dad, I want to change the world.’”

The only doors closed are the ones we refuse to open.

A recent report commissioned by Los Angeles County showed that the area wasn’t living up to its potential as a biotech hub, pointing to a growing need to retain its university graduates and attract more venture capital. This is something USC aims to conquer with its plans for an East L.A. biotech park to house startups, keeping scientists and engineers in town, according to USC President C. L. Max Nikias.

Besides Aragon, many young people braved the microphone, asking what Noriega saw from space (answer: a “gorgeous moving map” – Earth) and what to do if you’re not good in math (answer: seek resources).

Many of the approximately 600 attendees at the event had elementary school-age children. Jonas Rosas and Maria Bautista brought their 8-year-old son Kevin Rosas. He has the periodic table memorized and said he wanted to be a scientist.

When asked why she wants to prepare him early, Bautista responded, translated from Spanish: “We desire a better future for him.”

She wants to give her son opportunities she didn’t and see him make a name for himself in the world, she said.

“We wanted to make sure that the people living in these communities know that the future is really in STEM careers and they need to start focusing now on pursuing those careers,” said Thomas S. Sayles, USC senior vice president for university relations.

Sayles said it’s important to have the conversation, even for those as young as 8 years old.

The event is part of a larger effort of USC, pushing STEM opportunities in the communities surrounding its campuses in both South Los Angeles and Boyle Heights — such as STAR, a program that allows high school students to do medical research with students at the Keck School of Medicine of USC. Aragon is an example of this community effort as well. She’s a student at USC East College Prep, a charter school developed by the USC Rossier School of Education.

“I could have been sleeping in, but I woke up, took a shower and said ‘Dad, we need to go. It’s going to help me for my future,’” Aragon said.

Research in regenerative medicine can be a game-changer in the treatment of damaged organs, the senator says.