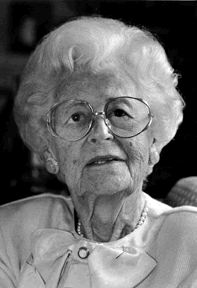 Dorothy Leavey in 1991, when she received an honorary doctor of humane letters degree at USC’s commencement exercises.

Philanthropist Dorothy Leavey, mother of trustee Kathleen McCarthy, died Wednesday, Jan. 7, at her home in Beverly Hills. She was 101.

Leavey was the widow of Farmers Insurance co-founder Thomas E. Leavey, who died in 1980. The Thomas and Dorothy Leavey Foundation, established by the Leaveys in 1952, has donated more than $100 million to religious, health care, social service, civic and cultural organizations.

In 1988, a $9-million challenge grant from the foundation provided major impetus toward funding of a new teaching library on the University Park Campus.

“USC’s state-of-the-art Leavey Library, which was completed in 1994 at a cost of $25 million, stands today as the cornerstone of the university’s library system,” said President Steven B. Sample. “Dorothy Leavey’s generous gift through the Leavey Foundation provides a bibliographic resource that will nurture the learning process for generations of researchers and scholars.”

Among other Leavey Foun-dation gifts to USC were a matching grant to assist in construction of an addition to the Law School; a gift to the department of nursing to support faculty research and clinical teaching; support for the Carl Mason Franklin Dean’s Chair in Law; and contributions to various scholarship endowments.

“Dorothy Leavey’s philanthropy inspired others to provide crucial support for our law school and university,” said Scott H. Bice, dean of the Law School and inaugural holder of the Carl Mason Franklin Dean’s Chair. “Her support for the university’s first dean’s chair motivated others to create similar chairs for additional USC schools, and her matching grant for our building campaign was instrumental in attracting additional gifts for the project.”

Major grants from the Leavey Foundation also included $8 million to the Assistance League for construction of the Dorothy E. Leavey Family Resource Center in Hollywood and $10 million toward construction of a new cathedral for the Los Angeles Archidiocese to re-place St. Vibiana’s.

Dorothy Risley Leavey was born in Omaha and reared in Cleveland and Chicago. She spent part of her childhood in Butte, Mont., and graduated from the school of the Convent of the Sacred Heart in Lake Forest, Ill. After attending the University of Montana, she worked as a legal secretary in Southern California.

Leavey met her future husband in 1928, when he and John C. Tyler were starting the Farmers Insurance Co. The Leaveys married in 1930.

Leavey is survived by her daughter Kathleen, nine grandchildren and 12 great-grandchildren. A funeral mass was held Saturday, Jan. 10, at St. Paul the Apostle Church in Westwood, with burial in Holy Cross Cemetery, Culver City.

The family has asked that memorial donations be made to one of the charities that Leavey supported.