It was five years ago, on the 10th anniversary of 9/11, that President Barack Obama initiated a challenge for U.S. universities.

Instead of a day of service, he wanted to challenge college campuses to a year of service, with a special focus on students of different faiths and backgrounds serving together.

And not just four-year universities joined in — there were military and police academies, trade schools and community colleges participating.

That first year, USC joined the challenge and has been a steady supporter since. Dean of Religious Life Varun Soni traveled to Washington, D.C., last week for a White House-sponsored event to discuss best practices for interfaith work on college campuses.

“But I think what’s more interesting is what we’ve actually done,” Soni said.

Secretary of Education John B. King Jr. ticked off a list of interfaith work around the country. The first he named was work done at USC, Soni said.

Soni pointed to Ansar Service Partnership — whose president, Farah Najib, went with Soni to Washington — as an organization leading interfaith service on campus. The organization plans fundraisers for refugees, gives food and supplies to homeless on Skid Row and does a “fastathon” every year to raise awareness around hunger and homelessness, the last drawing in roughly 200 people – half of whom aren’t affiliated with the group. 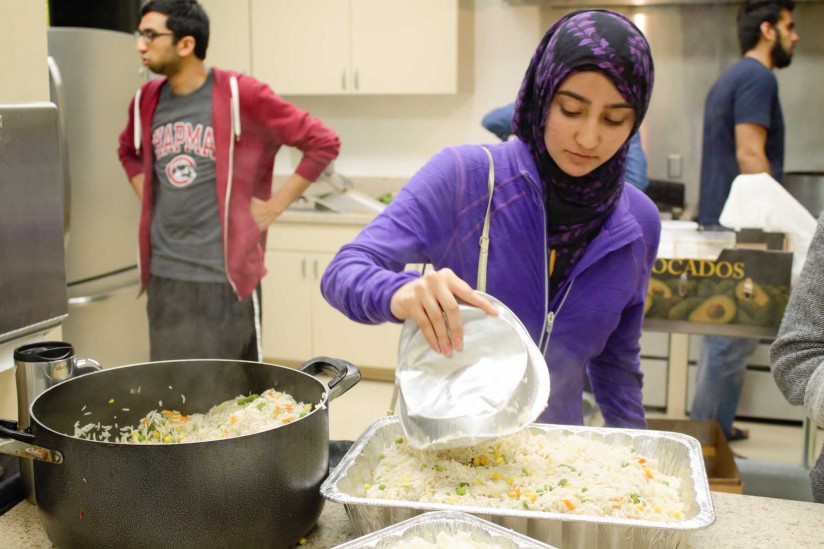 “I feel in doing work together, volunteering together, it’s definitely more than just sitting down in a seminar and a session and hearing about a religion like Islam,” said Najib, whose group touts interfaith community service with Islamic values. “I think, by doing, you impact others as well as learn a lot for yourself.”

USC’s religious diversity makes it a great spot for such work, Soni said. He points to the school having upwards of 90 student religious groups and more than 50 campus chaplains – both outranking most universities in the nation.

“Even my own appointment to USC was a symbol of USC’s pluralism and commitment to interfaith,” Soni said.

When Soni was appointed in 2008, he became the first Hindu to be appointed the head spiritual leader at a U.S. university.

Before, much of the interfaith work was just a dialogue between groups already interested in religious discussion, she said.

She remembered an event centered on Bob Marley, where Soni discussed different themes in the musician’s work, such as political conflict, religion and injustice.

Every year since the challenge started a representative has gone to represent USC in Washington, D.C., either faculty presenting at the White House or students, from ASP or the Interfaith Council, meeting with other students from across the U.S.

“It was important in terms of creating a national movement and consciousness,” Soni said of the challenge.

Whether the next administration in Washington continues the challenge, Soni said he will continue to make interfaith work an important tenet at USC.

“We were doing it during the president’s challenge, and we will do it after as well,” he said.

After the Orlando tragedy: a time for moral reflection

Sociologist Donald Miller sees a path to strengthening core values following one of the nation’s most atrocious incidents.

The USC Annenberg junior and pre-med student keeps busy using both sides of his brain.

USC writing professor Ellen Wayland-Smith looks at her own family tree and finds a relative who believed he was God’s prophet and led a 19th-century sect.

University honors staff, faculty who donate 1 percent of their salary to program that helps the neighborhoods around the school’s campuses.