Growing up in Los Angeles, Samvel Martirosyan’s parents always encouraged him to take advantage of opportunities not available back in Armenia, a place they had left when he was 5 years old, leaving behind their family, their jobs, their culture.

Now, more than a decade since they moved, Martirosyan is making his parents proud, excelling at USC’s Science, Technology and Research (STAR) Program – where, as a student at Francisco Bravo Medical Magnet High School, he gets to do research alongside USC pharmacists.

“When I reflect on what I learn in the lab everyday, I realize that I’m taking part in real research that is affecting real people,” he said.

And Wednesday night, speaking in front of hundreds in the backyard of the USC president’s home, Martirosyan said none of it would be possible without the contributions of USC, through its Good Neighbors Campaign. 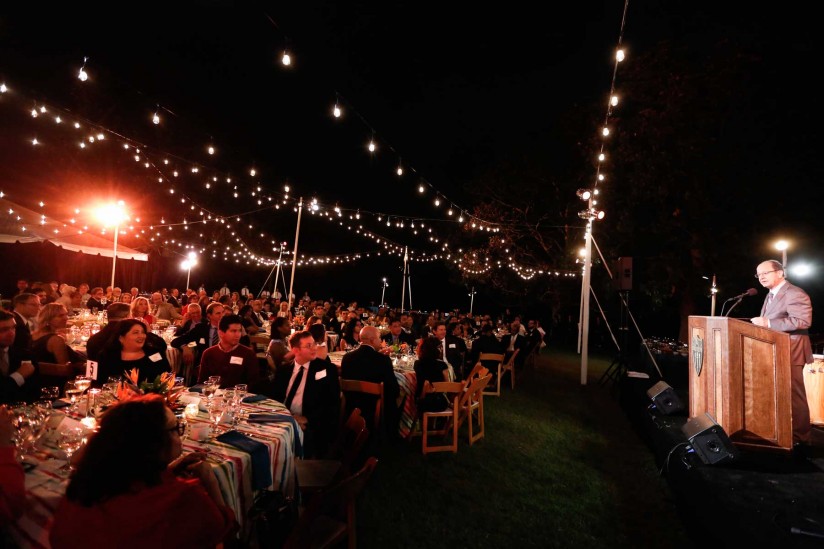 The campaign raises millions of dollars – more than $20 million since 1994 – to support education, health, public safety and economic growth in the communities surrounding both the University Park Campus in South Los Angeles and the Health Sciences Campus in Boyle Heights. The university covers all overhead and expenses so that 100 percent of proceeds go directly to the programs.

The dinner is an annual tribute to staff and faculty who give 1 percent of their income – automatically deducted from their paycheck – to the Good Neighbors Campaign.

One of those staffers was Virginia Ross, the assistant dean of business affairs for the School of Dramatic Arts.

Impact on the community

“You see the impact immediately in the community,” she said, pointing to the USC Family of Schools, a program that partners with 15 neighboring schools to provide educational help.

Hadia El-Bardisy, an accountant in the provost’s office, grew up in El Sereno near the Health Sciences Campus.

“Back in the day, there wasn’t something like this,” she said. “I think it motivates them, encourages them to go to school. The classrooms are overpopulated, kids slip through the cracks all the time and we’re catching some.”

USC President C. L. Max Nikias gave examples of many kids who went through different Good Neighbors-funded programs, such as Eduardo Mollienedo-Pinon, who grew up in Watts. Pinon learned the saxophone through the USC Thornton School of Music’s Outreach program and also went through the Neighborhood Academic Initiative – a seven-year program for kids who grow up in the neighborhoods surrounding the USC campuses – to become a USC graduate. As a student, he won a fellowship to analyze an opera, which he presented at New York University. He now works for the Long Beach Opera.

This year’s Good Neighbors Campaign kicks off in October.

The No. 2 executive at the LAPD comes to the university to expand its relationship with neighborhoods and focus on initiatives to elevate residents’ social, physical and economic well-being.