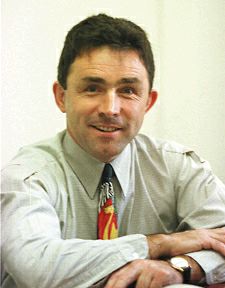 During the summers he spent as a boy in New Zealand, John WIlson pored over old issues of National Geographic that his grandparents kept in their garage. Its pages sparked his interest in the world, and eventually a career was born.

When John Wilson stumbled onto computer technology in 1989 that conducted sophisticated analyses of data plotted on maps, the geographer thought he was being ambitious in envisioning its applications.

“I thought I’d buy a machine to supplement my research and maybe build a small lab to teach classes to cartography majors,” Wilson said.

But the new professor in USC’s geography department admits that he grossly underestimated the impact that Geographic Information Systems (GIS) technology would have on his life.

Today Wilson is considered one of the world’s foremost leaders in academic research with GIS technology, which allows researchers to analyze a wide array of data sets by correlating them on maps.

Having established one of the West’s first GIS laboratories at Montana State University in the early 1990s, the visionary was hired last summer to help establish the Los Angeles basin’s first interdisciplinary GIS lab at USC.

Under Wilson’s watch, the interdisciplinary Geography Information Systems Laboratory is expected to become an important resource for researchers who want to analyze data with any sort of spatial component – a boon for statistical analysis of data sets that previously have not been compatible.

While overseeing the lab that will help USC scholars of all kinds apply GIS technologies to their research projects, the New Zealand-born scholar also plans to pursue his own research interests.

Wilson is the current and founding editor of Transactions in GIS, only the second peer-reviewed academic journal that looks at the rapidly evolving science, technology and applications of GIS.

He also is active in terrain analysis, a field that uses computers to construct and analyze models of the Earth’s surface. These techniques have been applied to problems of soil water distribution, erosion and deposition, pollution from various sources, crop growth and yield, and ecological modeling.

It’s a long way from his grandparents’ Christchurch garage, where Wilson picked up his appetite for geography.

“When I was really young, I was fascinated by National Geographic, and I used to visit my grandparents in the summer. They kept their old issues in the garage,” he said.

A native of a small agricultural community, Wilson chalked up his fascination with the magazine to wanderlust – until he took college qualifying examinations as a senior in high school. To his amazement, Wilson ranked first in the nation in the geography section.

While working on his dissertation years later as a Ph.D. candidate in geography at the University of Toronto, Wilson hit on the research questions that continue to occupy him today.

In 1981, Wilson set out to identify all the sources of pollution feeding into Lake Simcoe, a Canadian lake with increasing water quality problems. Deep into the research, he realized that he had did not have reliable-enough models to track the movement of water and chemicals across and through soil to fully realize the project.

“It was a painful lesson,” Wilson said.

From the experience, he emerged with a keen interest in evolving approaches to quantification in his field, which is the chord that GIS technologies originally struck.

Today, Wilson chuckles at his modest aspirations for the technology that by all accounts has revitalized the discipline of geography.

“What’s happened is that it has grown into a huge, global technology,” said Wilson, who spent parts of the past two years at USC as a visiting professor.

By the time Wilson formally joined USC’s geography department this summer after a decade in Bozeman, he had built a large GIS laboratory at Montana State University with two labs full of state-of-the-art workstations and personal computers, six full-time staffers and 10 graduate assistants.

“At my previous institution, I’d achieved all I could achieve,” he said, “whereas USC affords a new set of opportunities and challenges.”

For instance, USC offers the possibility of applying GIS technologies in different fields, he said. While Montana’s GIS lab frequently was pressed into service for agriculture and forestry research, USC’s GIS lab is expected to contribute to research programs in business, engineering, policy analysis and urban planning as well as those concerned with the natural environment. In fact, organizers eventually envision accepting contracts to conduct research and generate maps, graphs, charts and other graphics for a variety of campus researchers and private and public sector partners.

Meanwhile, Wilson continues to conduct research in the same general field as his during his Toronto days.

With his wife, fellow geographer Christine Ryan, Wilson is conducting a study of grasshopper infestations in sub-Saharan Africa, supported by the State Department’s Agency for International Development. The couple hope that GIS technologies will help them pinpoint infestation patterns to an extent that will allow international aid organizations to use pesticides and other control strategies more strategically. Success here would reduce the cost of control measures and minimize their adverse environmental impact.

Also using GIS technology, Wilson is collaborating with several Australian researchers to develop and test the next generation of digital terrain analysis tools. The team’s formulas already rank among the most widely accepted among terrain analysis scholars. The findings will figure in Terrain Analysis: Principles and Applications, a textbook edited by Wilson and John Gallant, an Australian environmental engineer, and due out later this year from Geo Information International.

“In a way, I’ve come full circle,” he said. “It’s only with these models that I’m finally able to tackle the sort of problems that interested me in my dissertation nearly 20 years ago.”

Geographically Speaking, John Wilson Is on the Map