On a warm weekday afternoon, class lets out for lunch in a program hosted by the USC Jimmy Iovine and Andre Young Academy. Instead of rushing out for food, eight or so teenage boys swarm Oscar Menjivar, founder and CEO of Teens Exploring Technology (TXT), a Los Angeles nonprofit whose technology and coding programs aim to teach young men the leadership, professional and interpersonal skills needed to succeed as adults.

For the second year in a row, the academy served as home of TXT’s Summer Coding Academy, a 15-week program for 35 boys working with the nonprofit’s staff to build apps that address problems within their community. The program took a chunk of their time — students were on campus every weekday from 10 a.m. to 3 p.m. — and it’s very selective: Of the 200-250 applications TXT receives each year, only 35 are selected to participate.

Based in Menjivar’s hometown of South Los Angeles, TXT serves an overlooked community that is approximately 70 percent Latino and 30 percent African-American, with a 50 percent dropout rate from high school. TXT’s students, he noted, are driven, eager to learn and passionate about technology, but they face significant barriers to attaining success: Only 60 percent have access to a computer at home and of that group, about 10-15 percent have their own.

He was once one of them

Not long ago, Menjivar was one of those young men. He might’ve strayed from the path to success had it not been for the mentorship of a former lacrosse coach. 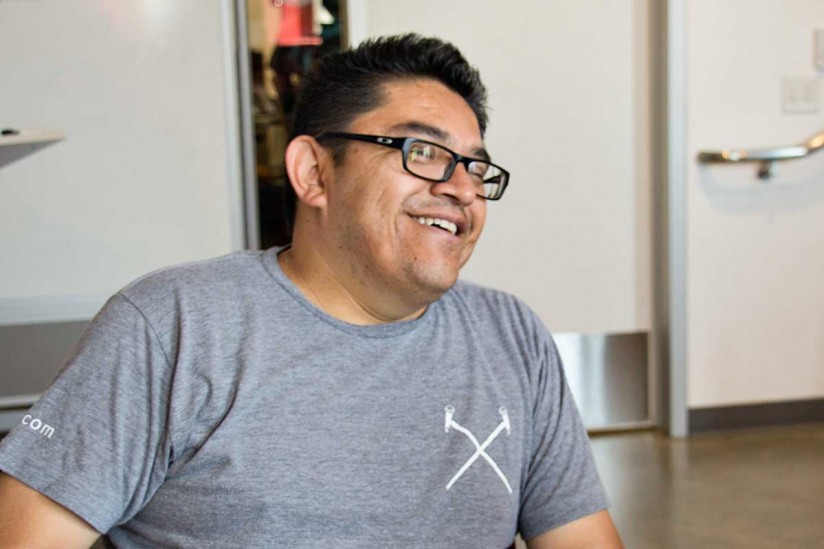 Interested in technology, Menjivar enrolled in computer science classes at his high school, then the worst school in Los Angeles County. The classes, as it turned out, “were really more like three to four years of typing,” he said. “They would give us a book, and we would use that to learn how to type.”

Looking back at his childhood, Menjivar painted a picture filled with negativity —  the Rodney King riots took place place during his high school years — and a system that provided few opportunities for young men to break the cycle of violence and joblessness that pervades their community.

It was Mr. Wonders who broke this cycle for him.

“He made sure that I was doing well in school. He would pick me up from my house every day at 5 a.m. to make sure that I got to school on time. Mr. Wonders always wanted me to do something different from the common aspirations in Watts, so he’d take me to Fry’s Electronics to go look at the computers and he’d ask me what I thought about them and what I thought about this or that career path.

“I was already interested in computers, but having someone to keep me on track, to develop me, make sure that I went to college, that was really important to me.”

Menjivar did go on to college, earning a degree in computer information systems and eventually earning a master’s degree as well.

He now finds fulfillment coaching and mentoring the young men whose adolescence mirror his own.

Success stories include Marco, who earned a bachelor’s degree in engineering at Stanford University after completing the TXT program. Although employed full-time at a company in Pasadena, Marco still lives in South Central and volunteers as a mentor.

That type of mentorship, combined with the access to the USC Iovine and Young Academy, inspire current students.

“There’s a lot of creativity that happens. It’s nice to see the students excited, and they feel special about coming here,” Menjivar said. “It feels really good for them to know that this is a welcoming space and that people enjoy having them here.”

Asked about the most gratifying aspect of his work, Menjivar said that watching students like Marco succeed and go on to do good for others is what fuels him.

“I love watching them excel — to go above and beyond what I dreamed for them. It’s gratifying to see them come back and say to me that they love what they do. They found their purpose, and they’ll do this for the rest of their lives whether they get paid for it or not.”