Of the 7 billion people who make up the world population, 1.2 billion do not have access to electricity. Solid fuel — mainly wood and coal — is still used for energy by 2.7 billion. The population is expected to increase to 10 billion by the year 2050, with a corresponding rise in energy needs.

That staggering data was presented by Professor Fred Cook, director of the USC Center for Public Relations, as an introduction to “The Future of Energy,” a panel discussion held by the USC Annenberg School for Communication and Journalism.

“So the big question is: How will we produce energy for all of those people?” Cook asked the crowd. “And how do we do it without having a negative impact on the environment?” 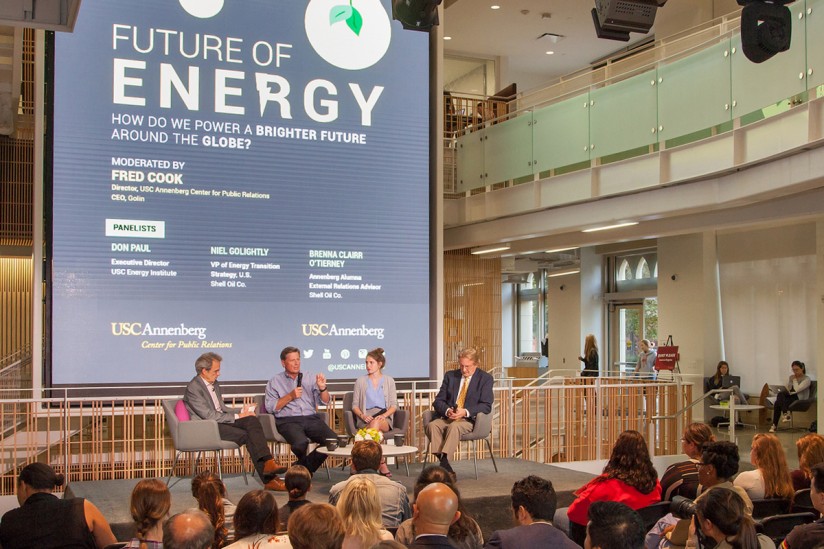 Those were the underlying questions at the center of the discussion, which Cook moderated. The three panelists were Donald Paul, executive director of the USC Energy Institute; Niel Golightly, vice president of energy transition strategy at Shell Oil Co.; and Brenna Clairr O’Tierney MA ’13, the external relations adviser at Shell Oil.

According to the panelists, one of the challenges now facing the energy industry is that although it’s making a concerted effort to move toward cleaner energy, the transition can be painstakingly slow.

“They have historically transitioned from wood to coal, oil to gas and now you’re adding more diversity,” Paul said. “A change of something in that scale is going to take a while, and when it does it’s also going to cause significant adjustments in the world around it because of that scale.”

The transition, Golightly noted, will not come easily.

“The complexity, size and scale of the energy system, just as it exists today, is pretty staggering,” he said.

Another challenge facing the energy industry: It does not have a reputation for being the most glamorous field, especially for budding communication specialists like those in the audience.

“It probably doesn’t make anybody’s top 10 list,” O’Tierney said. “I think that’s probably been true for quite a while.”

But that’s partly why the industry can be so rewarding for someone from a communication background. According to O’Tierney, there is a need to tell a compelling story about energy to the people who may be skeptical about the industry. On the other hand, there is a need to help the culture of the company have a deeper understanding of what the people expect from them.

“Understanding how to tell a consistent story, with a highly diverse set of views of the industry, is part of the challenge,” O’Tierney said.

Transforming oil wells into batteries for the sun and wind

USC researchers want to convert idle oil and gas wells into much-needed storage for sustainable energy, making California blackouts a thing of the past.

Back to our roots: Native plants are growing again at USC, thanks to student-led effort

Experts agree: The effort to move toward cleaner energy can be very slow