Understandably, “there was a sense of loss and disappointment,” said Mahta Moghaddam, a USC Viterbi School of Engineering professor in the Ming Hsieh Department of Electrical Engineering and one of the key scientists on the SMAP team.

The mission intended to provide researchers with a more complete understanding of changing climate patterns and the global water cycle by producing high-resolution maps of soil moisture.

The big question: Could the mission continue as originally planned? A group from the SMAP project and its science team — including Moghaddam, whose expertise includes radar instrumentation and interpretation of radar measurements — was tasked with tackling the challenge.

NASA needed to compensate for the missing radar data. This meant developing methods that combine data from different sources to produce high-resolution soil moisture maps. The maps, which provide information about global water, energy and carbon cycles, have numerous applications among hydrologists, geologists, meteorologists and agriculturalists.

Massachusetts Instiute of Technology Professor Dara Entekhabi, the science team leader for the SMAP satellite mission, described Moghaddam’s contributions as “broad and deep. She more than any other member of the SMAP science team or person in the science and engineering community has influenced the mission.” He credits her for developing “a novel approach that uses the synergy of active and passive measurements.”

To appreciate the importance of active and passive measurements, it helps to understand the design of the SMAP satellite, which is unique in that it includes both an active radar and a passive radiometer. Its radar instrument actively sent and received signals from the Earth’s surface, creating a high-resolution read of the soil moisture levels. Its passive radiometer measures the microwave emissions from the same areas, generating a very accurate, albeit coarse resolution, map of soil moisture.

By using these complementary instruments, the team could capture the best of both worlds: highly accurate, high-resolution soil moisture observations from the surface of the Earth. This type of product can help predict droughts or provide insights about global warming, as well as help generate accurate weather forecasts — all of which have strong environmental and economic implications. To provide some perspective, according to NASA, the approximate cost of the 2012 Midwest drought was estimated at $30 billion.

Fortunately, there was some good news. 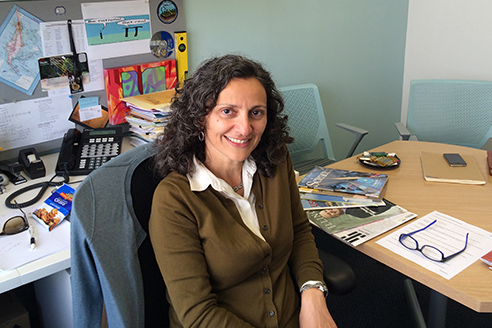 Mahta Moghaddam says the data is fundamental in shaping our generation’s understanding of the environment. (Photo/Mahta Emrani)

With only two and a half months of data to work with, Moghaddam and her colleagues needed to “make the best of what they had,” she said. The average length of data collection for this type of mission is typically around three years.

“The two and a half months of data that the team has is just beautiful — it is wonderful and very unique. It is a lot of data, it is global and it is fast repeat — the perfect type of data set for validating and testing our algorithms,” Moghaddam said.

Additionally, the satellite’s radiometer still worked, so the team was able to receive the data needed to generate highly accurate, even if coarse resolution, global soil moisture maps.

Lastly, thanks to the open access agreement between the global satellite agencies, the team could supplement its analyses with data transmitted from Sentinel-1, a European satellite. Sentinel-1, much like the SMAP active radar, collects high-resolution data and shares a partial overlap with SMAP in its orbit, thus making it a reasonable proxy for the missing data. Or, as Moghaddam called it, “a partial good solution.”

Entekhabi credits Moghaddam’s range of technical expertise and leadership skills for contributing to the team’s success.

“Fulfilling this role takes more than technical expertise,” he said. “Problems often need to be solved within a team and under time constraints. Professor Moghaddam brings the leadership and the capability to motivate and unite others. The SMAP project has been very fortunate to have [her] within its team.”

Said Moghaddam: “This type of data is fundamental in shaping our generation’s understanding of the climate and the environment. It will contribute to the scientific community’s ability to tackle global climate change. After all, what could be more meaningful than being able to make a difference in the world?”

Bogdan Marcu shares his amazing story — one that involves another USC alum in a key role — on the latest episode of USC Viterbi’s “Escape Velocity.”

Researchers team up in search for novel therapeutics that may eventually help astronauts better deal with the side effects of space travel.

Can a tree grow in space?

A living satellite might not be such a space oddity.

Clay Wang receives a grant to explore potential new drugs that may improve an astronaut’s health.