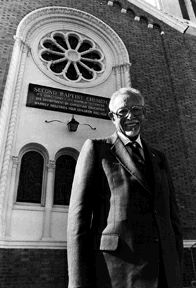 THE REV. THOMAS Kilgore Jr., who helped organize the historic 1963 civil rights march on Washington and worked hard to strengthen USC’s involvement with its neighboring communities, died Wednesday, Feb. 4, in Good Samaritan Hospital after a lifetime dedicated to social service. He was 84.

“He was always on the cutting edge of blending spirituality and community involvement; he knew that to be spiritual meant you had to have a positive impact on making this a better community,” said the Rev. William Epps, who succeeded Kilgore as senior pastor of the Second Baptist Church, the oldest African-American Baptist church in Los Angeles. Kilgore served as pastor of that congregation for 22 years and was a past president of the American Baptist Convention.

Noting that Kilgore had an “enormous” impact on USC and its neighborhood, President Steven B. Sample recently said: “Many of our earliest community initiatives were launched with the aid of Tom Kilgore. We will miss him deeply.”

Alvin S. Rudisill, former associate vice president for civic and community relations at USC, recalls recommending that Kilgore give a baccalaureate address at the university in 1972. Before a stunned crowd, including then-President John R. Hubbard, Kilgore chided the school for indifference to its neighbors and discussed what he felt was needed to bring the university and the community closer together.

“One of the wonderful things about Tom was that whenever he saw an opportunity to express an opinion about an inequity or inequality, he didn’t pull his punches,” Rudisill said.

Soon after, Kilgore was asked to serve as an adviser to Hubbard on university-community issues and to direct the USC Office of Special Community Affairs.

“We both felt that something could be done in a job like that to build some bridges that needed building,” Hubbard said at the time. “One of USC’s top priorities must continue to be its commitment to deal sensitively and responsibly with the people of the surrounding urban community. Although much has been accomplished, there is still much more to do.”

When the late President James H. Zumberge created the Office of Civic and Community Relations in 1984, he said the office would serve as a clearinghouse for all USC programs that interact with the community, work closely with community organizations, and maintain contacts with area planning agencies and elected officials. “The office will give the university the opportunity to speak with one voice to all of the diverse interests that comprise our surrounding community,” he said.

Kilgore served as an adviser to three USC presidents – Hubbard, Zumberge and Sample. The directorship of the Office of Special Community Affairs evolved into the post later held by Rudisill and now held by Kay Kyung-Sook Song in Civic and Community Relations.

KILGORE WAS ACTIVE in civil rights work throughout his adult life and maintained a long friendship with the Rev. Martin Luther King Jr. and his family. He became acquainted with the family during the Great Depression, when Kilgore was a freshman at More-house College in Atlanta, Ga.

Kilgore attended the Ebenezer Baptist Church in Atlanta, where the pastor was the Rev. A.D. Williams, maternal grandfather of the martyred civil rights leader. On Sunday afternoons, Kilgore was sometimes invited to the Williams home for dinner. There he met King for the first time.

“He was 2 1/2 years old, and I used to play with him and bounce him on my knee,” Kilgore recalled in a 1974 interview with the Daily Trojan. “I have kept close contact with the King family ever since.”

Kilgore recalled when he first began civil rights work, in Winston-Salem, N.C., during the Depression: “I was just out of college and became aware of some of the problems that the black tobacco workers in that area had. For one thing, there was quite a difference in pay between black and white workers who were doing the same job. So I started a class in labor organization at the church. If we had been discovered, I probably would have been thrown out of town.”

Even before King became the leader of the American civil rights movement, Kilgore was at work in the pulpit of the Friendship Baptist Church in New York, raising bail money for jailed civil rights workers in the South. When King was leading the Montgomery bus boycott in 1955, Kilgore helped raise funds for the movement in New York City.

When the Southern Christian Leadership Conference (SCLC) was created in 1958, Kilgore managed the organization’s New York office. He was one of the organizers of the 1963 march on Washington. In a historic photo of the march, a smiling, bespectacled Kilgore can be seen just behind King.

“I abhor violence, as King did,” Kilgore said in the Daily Trojan interview. “Nonviolence is a slow process, but it is the true process for valid social change. There were obstacles in those days and the harassment was terrible, but we managed to circumvent those obstacles without resorting to violence.”

In Los Angeles in the early 1960s, Kilgore and about a dozen other prominent African American ministers formed an alliance that was the forerunner of the Los Angeles chapter of the SCLC, the only chapter west of the Rockies.

After the 1992 riots, Kilgore was one of the first to encourage the formation of the Interfaith Coalition to Heal L.A., an ecumenical group to promote cross-cultural dialogue.

Kilgore was well-known in local political circles as well, acting as an adviser to former Los Angeles Mayor Tom Bradley and serving for many years on the Community Redevelopment Agency. His work resulted in government funding for the Community Services Center and El Centro Chicano.

At USC, Kilgore was the founder of the Black Alumni Association – for which an endowment has been established in his name to provide scholarships for black and other minority students.

Kilgore was born in Woodruff, S.C., on Feb. 20, 1913, the son of Thomas and Eugenia (Langston) Kilgore. He was a graduate of Morehouse College (A.B., 1935) and Union Theological Seminary (B.D., 1957), and he did postgraduate work at Howard University’s School of Religion in academic year 1944-45. He held eight honorary degrees, including a doctor of divinity degree from Morehouse College (1963).

From 1935 to 1938, Kilgore was principal of public schools in Rutherford and Haywood counties in North Carolina. He married the former Jeannetta Miriam Scott in 1936.

Kilgore is survived by his wife, Jeannetta; two daughters, Lynn Elda and Jini Medina; and three grandchildren. A memorial service will be held Wednesday, Feb. 18, at 4 p.m. in the chapel of USC’s Religious Center.

The College Football Hall of Famer’s performance in USC’s 1970 win at Alabama is often credited with helping integrate Southern football.

Hughes and his family are the largest benefactors in the history of the university — with many of his gifts arriving anonymously.

After lettering for three seasons at USC, Williams became one of the most successful high school football coaches in San Mateo County.