Members of the USC community took a moment Friday morning to remember the 15th anniversary of the attacks of Sept. 11, 2001. The commemoration included a moment of silence and the laying of a wreath at the USC 9/11 Memorial on McClintock Avenue.

“It’s hard to believe that our first-year students probably don’t remember 9/11 even though they have grown up in its shadow,” said Varun Soni, USC dean of religious life. 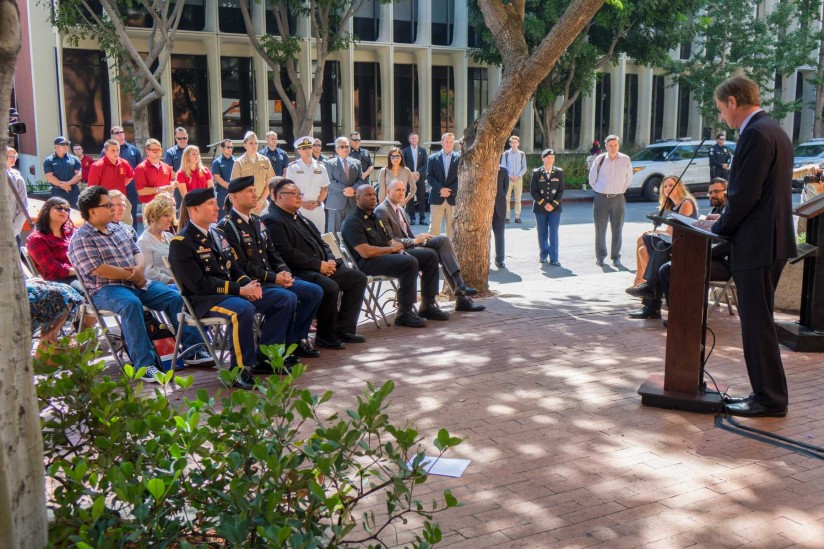 Those who do remember, he said, will never forget: “We will all carry those powerful images and overwhelming emotions with us throughout our lives.”

Soni remembered the victims in New York, Washington and Pennsylvania, as well as the first responders, firefighters, police officers and medics. He recalled the passengers aboard United Flight 93. And he paused to remember the suffering of the victims’ families and friends.

Terrorism around the world

With more than 90 countries represented among the victims at the World Trade Center, Varun noted that many nations have been victimized by terror since 9/11, from France to Turkey to Egypt to Pakistan and beyond.

“We mourn together as a global Trojan Family, a family that represents virtually every state in our country, every nation in our world, and every religion on our planet,” he said. 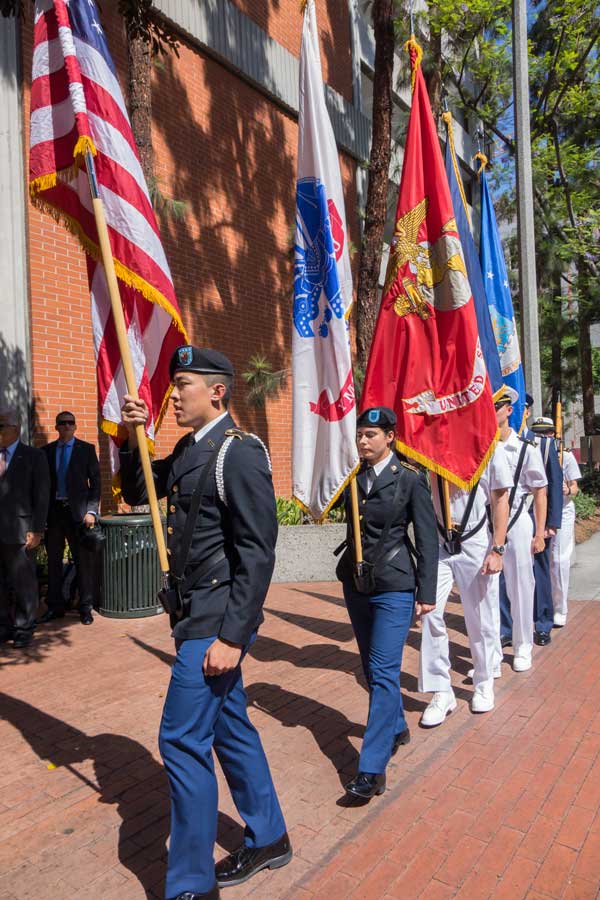 Dean Jack H. Knott of the USC Price School of Public Policy said that more than 10,000 people have been killed by terrorist attacks just this year. He cited USC’s many contributions to the fight against terrorism – from the CREATE Homeland Security Center to the Price School’s Safe Communities Institute – but offered a reminder that Americans must remain true to the nation’s values even while working to prevent future attacks.

“We must hold on to this sense of being one community, especially in a political climate as explosive and divisive as the one we are in the midst of today,” Knott said.

Also speaking at the event were Chief John Thomas of the USC Department of Public Safety and alumna Jennifer Massey, who barely missed being at the World Trade Center at the time of the attacks. As an undergraduate, Massey worked tirelessly to establish the 9/11 Memorial on the University Park Campus.

“I didn’t want the memory of this horrendous attack to fade into history like some long ago, far away event,” Massey told the crowd.

“Remembering that day is not a choice but our solemn obligation.”

The memorial, outside the DPS offices at Parking Structure A, includes the top of an I-beam from the World Trade Center that was donated to USC by the September 11th Families Association and the Fire Department of New York.

The event was sponsored by the USC Price School, the Office of Religious Life and DPS.

Professor weighs in on historical legacy of 9/11

USC Gould School of Law Professor Mary Dudziak recently joined a panel of historians who reflected on the effect the Sept. 11, 2001 terrorist attacks have had on American foreign policy and how the “war on terror” has changed evaluations of history.