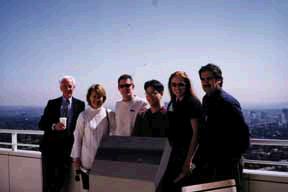 “As they said about themselves, they levitated,” said faculty sponsor Carl Voigt, assistant professor of clinical management and organization. “They did amazingly well. They gave their all in the competition. They did us all very, very proud.”

The Marshall team was represented by Sean Stewart, Amy Cottleleer, Rory Gibbs and Aric Davison. Mike Mische, an adjunct professor, was also one of the team’s faculty sponsors.

First place, however, went to the team from the National University of Singapore. They go home with the cup, plaques for each of the team members and bragging rights until next year’s competition. Third-place winners were undergraduates from the Kelley School of Business at Indiana University.

This year’s case dealt with issues General Motors faced last year with its Saturn line of cars. On Thursday, Feb. 26, the students were given a 38-page Standard & Poor’s Survey of the auto industry to digest before receiving the actual case on Friday morning.

Once they had the case, they locked themselves in rooms with computers and Internet access for 24 hours to prepare their presentations. They delivered their 20-minute presentations on Saturday with each followed by a 10-minute question-and-answer session before a panel of judges.

“The competition was very, very intense,” Voigt said. “We were all amazed at what our undergrads could do. Indiana was masterful. McGill made a gallant effort at defending their title. They all enjoyed themselves and said they would return next year.”

And Voigt said he was more than pleased with Marshall’s second-place finish. “We’re so stoked we came in second. We beat all the U.S. teams, we beat all the teams in the Western Hemisphere. We won second, we didn’t lose first,” he said.