Cultural barriers gave way to goals and slide-tackles in Uganda this summer as part of a public health immersion camp led by USC students and alumni.

In the rural Mpigi District, the one thing that brings people together is soccer. So connecting the sport to public health was a logical choice for USC Institute for Global Health Associate Director Heather Wipfli, who’s worked in the region for years and developed the program. 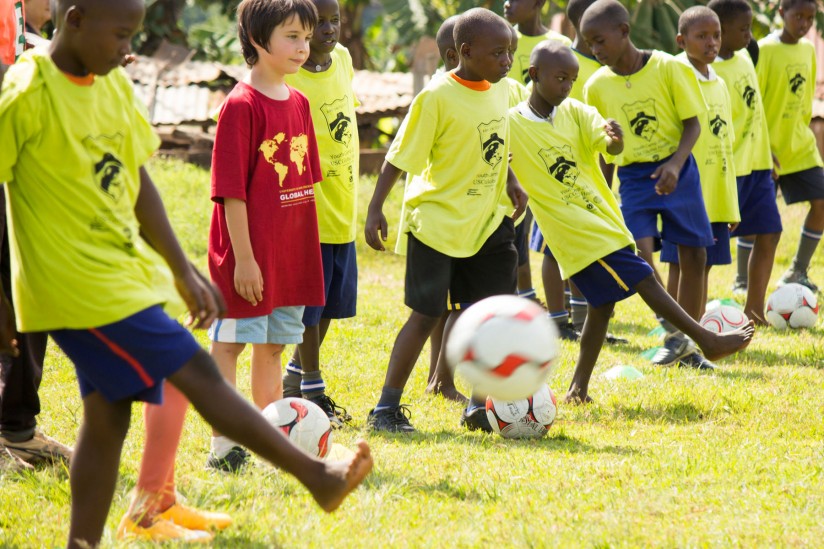 Just outside the chaos of Kampala, Mpigi remains largely rural farmland. Despite the district’s natural resources and proximity to the capital, residents struggle to obtain even basic health services and education due to a lack of infrastructure and other challenges.

Using soccer fields as common ground, the USC volunteers teamed up with students from Uganda’s Makerere University. Together they planned educational sessions and spent a week in the villages leading lectures, games and discussions with local youth.

Ranging in age from 9 to 15, 1,200 children from 40 schools cycled between health lessons and soccer classes in day camp throughout the district.

The lessons covered health and development subjects ranging from hygiene to gender roles. Each camp participant received a workbook, T-shirt, backpack and school supplies; teachers were given lesson packets to recreate the camp activities throughout the school year.

In the soccer rotations, students trained with professional coaches and scrimmaged for a chance to move on to a district tournament on the fifth day.

With students from Makerere and USC serving as co-instructors, the children had an opportunity to learn from various perspectives — and it gave the instructors a chance to learn from each other.

“My greatest takeaway was getting to see the easy carefree smiles on the students’ faces when we found that common connection,” said Master of Public Health online program student Kieshla Louchnikov. “I learned just as much from the students as they learned from us.” 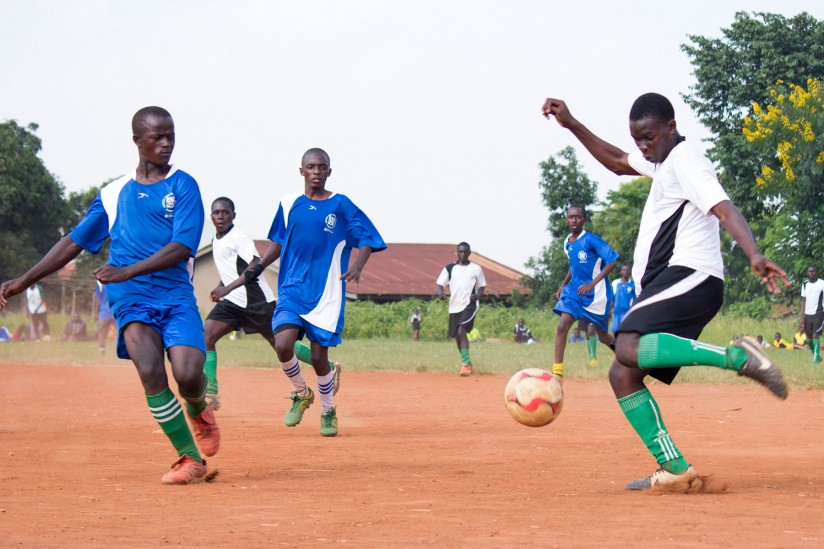 Players get a leg up at a district tournament. (Photo/Larissa Puro)

The camp was a collaboration between the USC Institute for Global Health and the nonprofit foundation Ray United FC. The camp involves Ugandan organizations, including sports NGO Edgars Youth Programme, the nonprofit Youth at Work Initiative and the community group Twezimbe Development Foundation. Each day at the camp, nearby restaurants prepared food for the participants and staff.

After the camp, the USC volunteers spent their second week touring the district health center, local schools, health organizations and the Uganda Ministry of Health, where they met with then-Minister of Health Elioda Tumwesigye.

Wipfli and her son founded RUFC after Ray accompanied her during one of her work trips to Uganda in 2014.

“In the end, it’s not just about coming to a community to educate others,” Wipfli said. “By working with local leaders and community activists, students learn the importance of resilience, cultural humility and building professional relationships.”

USC students interested in participating in future immersion experiences may visit globalhealth.usc.edu or subscribe to the USC Global Health newsletter.

When Diana Qi determined that health care administration was right for her, she realized she’d additional education to succeed in the field. USC Price’s online Executive Master of Health Administration program was the answer.