First in a series

Prostate and lung cancer have been the No. 1 and 2 cancers among men. Stomach cancer, the third leading cause of cancer deaths worldwide, has been on a steady decline among Koreans and Japanese. Black men had the highest overall rates of cancer. Thyroid cancer — which is relatively treatable — has been on the rise, and women are about three times more likely to contract it than men.

Every day this week we look at a different aspect of cancer from the new book Cancer in Los Angeles County: Trends by Race/Ethnicity 1976-2012.

The study of every cancer diagnosis in the county over the past 37 years — more than 1.3 million — reveals some surprising trends.

Asians have been less likely to be diagnosed with breast cancer. Is that still the case?

Liver cancer is among the more preventable diseases, but for one group rates are skyrocketing.

Testicular cancer was once regarded as a white man’s disease. Not any longer.

These are a few of the notable nuggets in the most recent Cancer in Los Angeles County: Trends by Race/Ethnicity 1976-2012, a book released on Aug. 15. The report card includes every cancer diagnosis in the region over the past 37 years — more than 1.3 million. With easy-to-read charts, the book divides L.A.’s population into 11 ethnic and racial groups to highlight the fact that cancer risk is a result of genetics, environment and behavior.

“Not only are we telling people what has happened to others in the past, but we are also helping them understand their own future cancer risk,” said Dennis Deapen, the report’s senior author and a professor of clinical preventive medicine at the Keck School of Medicine of USC. “The majority of cancer in Los Angeles is preventable: You can reduce the risk yourself. Let this be a reminder to get appropriate checkups to help identify any cancer early.” 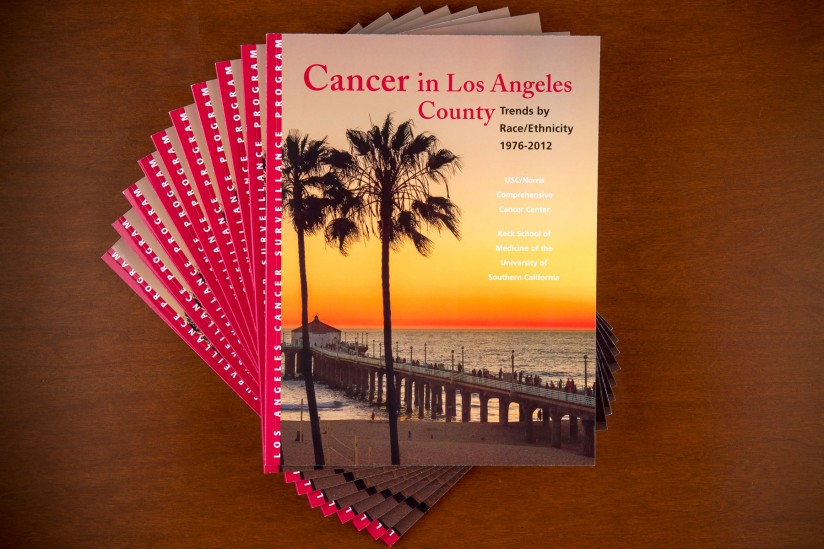 The cancer surveillance program has amassed decades’ worth of data on cancer trends in Los Angeles County. (USC Photo/Gus Ruelas)

The Los Angeles Cancer Surveillance Program (CSP), a state-mandated database managed by Keck Medicine of USC and the USC Norris Comprehensive Cancer Center, provides scientists everywhere with essential statistics on cancer. About two publications each day cite this large and diverse databank as a resource, said Deapen, who directs the program.

“The message for immigrant populations is very clear,” Liu said. “When they come to this country, their lifestyle changes affect their cancer risk.”

Liu noted that while immigrants’ risk generally increases for cancers that are common in this country, their risk for others common in their home countries — like stomach and liver cancer — decreases.

“The general explanation is the exposures to risk factors associated with specific infections and lifestyle choices change once immigrants leave their home country,” Liu said. “For example, prevalence of H. pylori and HBV infections is much lower in the U.S. than in Asian countries. Both are major risk factors for stomach and liver cancers, respectively.”

The scientific jury is still out when it comes to the impact of specific lifestyle factors, including dietary patterns, but Liu said the changing cancer risks among different immigrant populations can provide valuable information for better understanding and better control of cancer.

Los Angeles is the most populous county in America. It houses about 9 percent of the country’s Latinos and Asian-Americans — two of the fastest-growing demographics in the nation.

Annually, some 41,000 new cancer diagnoses are added to the CSP database, which can provide an overview of cancer incidence patterns in different population groups and generate rosters of patients so that scientists know who to invite to participate in cancer research. The current report card is the third L.A. County cancer report card since 2003.

“Although we still don’t know the whole picture of causes for every cancer, as scientists, our goal is to reveal the existing but often hidden cancer risk patterns,” Liu said. “The next question is what’s the difference between a low-risk group versus a high-risk group. If we know that, we may be able to help.”

The main message is that many cancers are preventable and, if caught early, are curable, Deapen said. In general, cancers of the prostate, cervix, esophagus and lung are on the decline.

“We are greatly encouraged to see the steady decline in the rate of deaths due to cancer, which was not true in the first 20 years of the CSP,” Deapen said. “It is great to see so many people understand that they can take action when it comes to cancer risk.”

A sampling of L.A. County cancer trends in context of the past 37 years

The report card project was funded by the National Cancer Institute, National Institutes of Health, Department of Health and Human Services, and Centers for Disease Control and Prevention.

New drug shows promise for fighting both COVID-19 and cancer

Researchers at the Keck School of Medicine of USC and the Cleveland Clinic Florida have published studies of a protein implicated in both COVID-19 and multiple types of cancer, and a new drug that interferes with its effects.

A new class of small molecule drugs, now in phase 1 clinical trials, is the first to target circadian clock proteins, which play a key role in the recurrence and spread of the deadly cancer.

A USC-led team of researchers finds remarkable results with the blood test in a small group of patients.