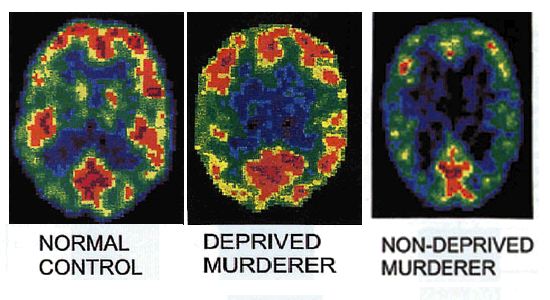 These PET scan images illustrate the reduced prefrontal glucose metabolism (upper part of scan) in a murderer lacking psychosocial deprivation (right) compared to a murderer with psychosocial deficits (middle), and one normal prefrontal activation. Red and yellow indicate areas of highest glucose metabolism, while black, brown and blue indicate areas of lowest activation. The USC-UCI findings based on such images help substantiate the roles of nature and nurture in predisposition to crime.

DYSFUNCTIONAL BRAINS – not dysfunctional families – may explain some murders, especially when the murderer comes from a “good” home, according to research published in the current issue of the journal Neuropsychiatry, Neuropsychology and Behavioral Neurology.

“If you’re antisocial but you come from a good home, the reasons for your violent behavior may have more to do with biology than your upbringing,” said Adrian Raine, professor of psychology in the College of Letters, Arts and Sciences, the article’s lead author.

“Parents of violent kids think, ‘What did I do wrong?'” said Raine. “When the kids come from a good home, the answer may be absolutely nothing. A biological deficit may be to blame.”

Murderers from relatively benign backgrounds are more likely to have reduced activity in two key brain areas than murderers from homes wracked by conflict, deprivation and abuse, Raine reported.

Raine directed a study in which scientists from USC and the University of California at Irvine used positron emission tomography (PET) to scan the brains of 38 men and women charged with murder. Some of the subjects had pleaded not guilty by reason of insanity, while the rest had been found incompetent to stand trial.

PET SCANS MEASURE the up-take of blood sugar (glucose) in various brain areas during the performance of simple, repetitive tasks. (Glucose is the basic fuel that powers most cell functions. The amount used is related to the amount of cell activity.)

The researchers scoured court records, attorney interviews, medical and psychological records, and newspaper articles for evidence in the subjects’ upbringing of physical or sexual abuse, neglect, extreme poverty, foster home placement, severe family conflict, a broken home or having a criminal parent – all environmental risks commonly associated with a propensity for violence.

The researchers then rated the severity of the risks they found on a five-point scale, with 0 representing no abuse, 1 minimal, 2 partial, 3 substantial and 4 extreme.

OF THE 38 MURDERERS, only 12 were found to have suffered significant psychosocial abuse and deprivation (ratings 2 to 4). The remaining 26 were found to have experienced minimal abuse and deprivation or none (ratings 0 – 1). Compared to the subjects from bad homes, the 26 subjects from benign backgrounds averaged 5.7 percent less activity in the medial prefrontal cortex. More significantly, one particular part of the medial prefrontal cortex – the orbifrontal cortex on the right hemisphere – showed 14.2 percent less activity.

Located just behind the forehead, the prefrontal cortex has been shown (in animal research) to be involved in inhibiting the functions of the limbic system, a far deeper area of the brain that gives rise to aggressive behavior.

Animal research also has shown that the right orbital frontal cortex is involved in fear conditioning – that is, in making a subconscious association between antisocial behavior and punishment. In humans, fear conditioning is thought to be the key to developing a conscience.

“Why doesn’t everyone assault others or act violently?” Raine asked. “One reason is that most of us are good at fear conditioning and we’ve been punished in childhood for doing minor things like stealing or hitting friends. So we’ve learned the association between antisocial behavior and punishment and therefore feel fear when we even contemplate an antisocial act.

Outside of any effect they may have in predisposing an individual to violence, such brain deficits can only be detected through such relatively new functional brain imaging techniques as PET scans.

Raine said the USC-UCI study sheds light on a long-standing mystery in crime and punishment – how some criminals appear so clearly to be a product of their background, while others seem to defy their seemingly benign upbringing.

“It may help explain the difference between Robert Alton Harris, who was battered from pillar to post all his life, and Jeffrey Dahmer, who by all accounts came from a good home. Brain dysfunction may have played a relatively greater role with Dahmer.”

Raine said that further research is needed to discover causes of the reduced brain activity detected in the USC-UCI study.

“If reduced activity in the two areas of the prefrontal cortex in fact predisposes an individual to homicide, then tackling the causes of the brain dysfunction would help reduce violence,” said Raine, the author of The Psychopathology of Crime: Criminal Behavior as a Clinical Disorder (Academic Press, 1993).

PAST RESEARCH HAS established an increased propensity for aggressive behavior among individuals with lower function in areas of the brain that can sustain damage during birth or other obstetrical complications. How-ever, research has never established a vulnerability to obstetrical complications in either the medial prefrontal cortex or the right orbital frontal cortex.

This, said Raine, suggests that individuals are born with this sort of brain dysfunction. The differences in brain activity also did not appear related to age, sex, ethnicity, handedness, schizophrenia or generalized brain dysfunction.

The findings are consistent with a 1981 English study that linked deficits in fear conditioning to antisocial behavior, but only among individuals from apparently good homes. Raine replicated those findings in a 1997 study of 1,795 toddlers living in Mauritius, an island in the Indian Ocean.

Given the homogeneity of the current study sample, the USC-UCI findings cannot be generalized to other violent populations, Raine said. For the same reason, measuring activity levels in the medial prefrontal cortex or the right orbital frontal cortex cannot yet be used as a test to determine whether someone is a likely murderer.

The findings do, however, help to substantiate the dual role of nature and nurture in predisposing an individual to crime. Raine’s earlier research found that individuals who suffered both birth complications and maternal rejection are more than twice as likely to become criminals in adulthood, compared with individuals who suffered only one or the other of these risk factors.

“Research continues to illustrate the critical importance of integrating biological with social measures in understanding how violence develops,” Raine said.

When Nurture Makes Murder a Mystery, Nature May Offer Clues