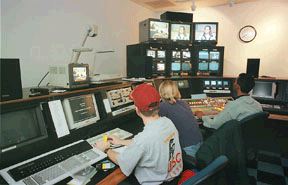 Trojan Vision staff, from left, assistant director John Peck, director Gina Hall, and technical director WIllie Harvey, in the control room at the 32nd Street facility where they are at work on “CU@USC,” a live talk show.

The production staff in the cramped control room at Trojan Vision’s operations center on 32nd Street customarily breaks into applause at the end of the evening newscast. It’s as much to relieve the tension of producing a live television show as to congratulate each other about the quality of the broadcast.

Live television can be a dicey proposition. Like any news operation, Trojan Vision, which broadcasts three hours of programming each weekday evening, often works without a net, transmitting reports of the day’s events or Larry King-style interviews without benefit of revision.

“There are no do-overs in live television,” said Marcas Grant, this evening’s co-anchor on the news show, which has just gone out over cable television to a potential audience of about 24,000 on and around the campus.

You get one shot at getting it right.

All right, “60 Minutes” it’s not. On some nights, the glitches come in bunches. A talk show logo that’s supposed to pop up discreetly in the corner of the screen develops a sudden case of elephantiasis, swelling alarmingly on the control room’s main monitor until it blocks out a shot of the show’s guest. A taped news segment runs about two seconds too long, unintentionally revealing a blurry shot of a city street. An anchor tries haltingly to get her lips around a four-syllable word.

“Ugh. Oops. Nooo.” Sometimes, the exclamations in the control room – a dark, rectangular space with banks of monitors and blinking equipment – resound like the mutterings of baseball fans watching their heroes blow it in the bottom of the ninth. But really, it’s not that bad, insist faculty advisers to the student-run television station, which is operated under the auspices of the Annenberg Center. In fact, after only six months of operation, Trojan Vision is starting to gel. It compares – stumbles, glitches and all – to small-market television programming (with audiences of about 100,000) around the country, they say.

And the television station, possibly the only one of its kind in the nation, is starting to produce moments of polish that can vie with anything on commercial television.

Take the half-hour program “In Real Time,” in which camera crews leave the station’s headquarters in the Colburn School of Performing Arts to do asphalt-level documentaries.

“There are segments there, like the show in which they went on runs with the Jefferson Street fire station, that compare with [the CBS documentary show] ’48 Hours,'” said executive director Don Tillman.

The nightly news show is garnering scoops, like an interview with the Rev. Jesse Jackson, on campus to drum up support for a union, or the announcement of a $5 million donation to the Marshall School of Business’ entrepreneurial program. It even had an exclusive interview with Athletic Director Mike Garrett in the midst of some well-publicized personnel problems.

There are about 120 students involved in the operation. All but a small staff of 17 part-timers are volunteers. Some of them are would-be professionals in the television industry, cinema-television or journalism majors who are learning a trade. Others – engineers, or music and business majors – just wanted to partake of the excitement of live television.

“They’re a tremendously bright group of young people,” said Tillman, whose lengthy career as a television executive includes 12 years as general manager of Channel 11, the Los Angeles Fox affiliate. “I’d like to say that we recruited them, but we didn’t. They came to us.”

Collectively they turn out a lively assortment of sports reports, music and video programs, movie reviews, comedy shows and an L.A.-oriented “travel” show, as well as the nightly news and talk shows. They edit tape, write scripts, appear on camera and try to sell ads (so far only public service ads, urging things like preserving the environment and being physically fit).

THE STATION HAS about $1 million worth of equipment jammed into the Trojan Vision suite, including three editing bays, where Avid System machines break taped video and audio into digital pulses that can then be reassembled as finished television shows. The equipment was purchased with funds from the Annenberg Center and with contributions from the Sony Corp.

“I’ve worked at commercial television stations that weren’t as well-equipped as this one,” Tillman said.

There are 310 university-owned television stations in the country, Tillman said. The vast majority are either Public Broadcasting System affiliates with little local programming, student-operated movie and video venues, or, as Tillman puts it, “toys for students to play with while they’re in school.”

Trojan Vision – “none of the above,” Tillman insisted – is unique in that it has been structured as a commercial television station, committed to a set amount of original broadcasting five days a week. Last semester, Trojan Vision churned out 561 hours of television, including 197 hours of live programming.

“It’s an insatiable animal,” Tillman said of the medium. “It eats programming. That’s what I told the students at the beginning. ‘You’re about to unleash an animal. If you don’t feed it, it’ll eat you alive.'”

The student broadcasters seem far from intimidated. Poring over taped images in the editing bays, banging away at computer keyboards in the tight news room or just comparing notes on a broadcast in the hallways, they seem to burn with a blue flame.

Silva Harapeti, who alternates between hosting and producing “CU@USC,” the live talk show, explained how she elicits the unpredictable in her shows: “You meet your guest beforehand, establish some sort of contact,” she said. “But don’t let them know what you’re going to ask. You try to give the guest” – she pauses to relish the phrase – “an unexpected moment.”

On the show’s set, with a blue couch and a blond-wood coffee table, discomfited host Tracey Finley tried desperately to find that unexpected moment in a conversation with an imperturbable, fast-on-his-feet trial lawyer. “When I got out of school, I knew I wanted to be in the courtroom …”

“When we come back,” Finley said, setting up a break, “I want to ask you about law school. All those books, all that reading.”

In the control room, the production staff looked on dispassionately. Director Scott Zabielski, juggling shots from three studio cameras, talked casually with the cameramen doing the broadcast. “Give me a close-up,” Zabielski said. “I want an emotional shot.”

“What’s an emotional shot?” someone asks. “When he cries?” Everybody laughed.

Beth Maharrey, the adviser to the news show, conceded that her charges may be a step or two below most small-market technicians and talent. “We might have a separate crew every night here,” said Maharrey, another broadcasting veteran, whose credits include a stint as acting news director at KCAL-TV.

For one thing, all of the staff at Trojan Vision have school obligations. “It’s tough around midterms or the end of the semester,” Maharrey said.

There’s a fallout because of that. “If you don’t have the same people running the show every night,” she said, “the level of professionalism is going to be less. That’s not the studio’s fault. It’s just the nature of the beast.”

But it’s all part of the learning experience. Let ’em make mistakes, Tillman said. “Better that they make mistakes here than on their first job.”

ANOTHER EVENING a few weeks later: Trojan Vision is starting to look even more like your local television station. “We’re operating in phases,” Tillman said. “The first phase was to get up and running. Then we wanted to expand and perfect the programs. Our third phase is to add more bells and whistles.”

THE LATEST OF THE BELLS and whistles is a CromaKey, a blue screen jammed in one corner of the broadcasting room, on which weather graphics can be projected. The nightly news has a weatherman, Tim “Big Red” Wollack. The forecast is for cold and rain, and Wollack shows up with an umbrella and a wool cap and sings a few bars of “Singin’ in the Rain.”

In the control room, Jake Milstein is tonight’s executive news director. A junior in journalism, Milstein also does the news show’s graphics on his home computer. He’s getting good at broadcasting techniques, like squeezing a “teaser,” a 20-second summary of what’s to come, into the opening credits.

The show has its share of rough spots – unexpected moments of the less-desirable kind. But anchors Martha Guzman and Tim Maestas creditably get through a half-hour of news.

Afterward, somebody asked Milstein to list the high points of Trojan Vision. “The real high point is getting it on the air,” he said. “A lot of people said it would be too hard for us. But we do it every night, and it looks good. Every night is a high point.”