When it comes to a major natural disaster hitting Southern California, experts agree that it isn’t a matter of if, but when.

In response to those looming threats, the USC Bedrosian Center on Governance at the Price School of Public Policy partnered with prominent civic leaders to launch the SoCal Disaster Risk Reduction Initiative, a set of recommendations designed to minimize the damage and disruption caused by a natural disaster. 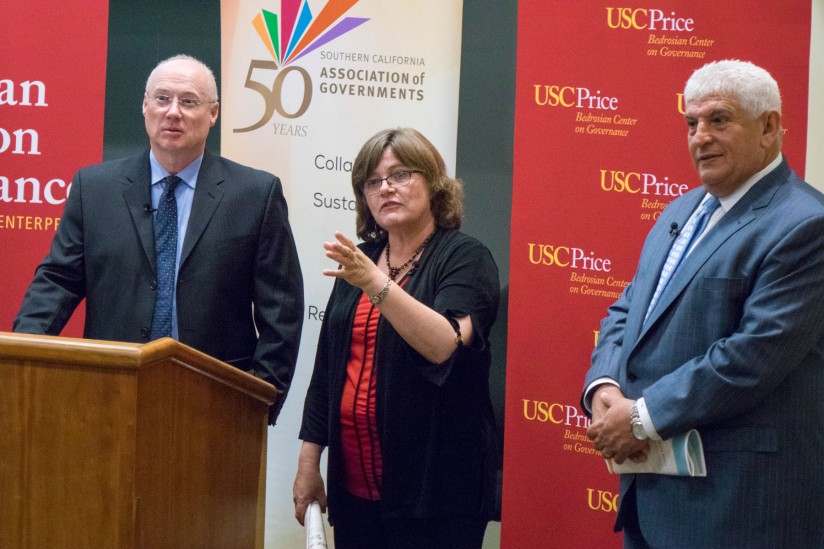 “In my view, this initiative and the notion of resilience in the face of disasters is really about governance,” said Raphael Bostic, director of the Bedrosian Center. “It’s about how do we come together and work as communities across the various parts of our society – the private sector, public sector and nonprofit – to be effective, to respond quickly, and respond in a way that makes sure people are safe. It’s about minimizing the damage and pain people experience. That kind of implementation is at the heart of the Bedrosian Center.”

Bostic was joined by retired U.S. Geological Survey seismologist Lucy Jones, a special adviser to the joint team’s executive committee, as well as initiative co-chairs Chris Smith of EQC Global and Hasan Ikhrata, executive director of the Southern California Association of Governments, at USC last month for a public presentation of the initial recommendations.

Southern California, which is under constant threat from earthquakes, wildfires and floods, represents half of the nation’s seismic risk. To prevent inevitable disaster from becoming a full-blown catastrophe, the joint team compiled a list of best resources leading to focused outcomes that can be implemented in five areas: infrastructure interdependencies, education on true impacts, social capital as a solution, fire following earthquakes and enhancing building resilience.

The more that all of us take some action, the more likely we’ll all be better afterward.

“We all know we have a problem, we all have things we can be doing, and the more that all of us take some action, the more likely we’ll all be better afterward,” Jones said. “That’s the only way it’s going to work. We’re all in it together.

“We’re a complex urban environment. What you have [with this report] is something that anybody – at whatever level, here in Southern California – can look at and see what function they could be undertaking to make a difference.”

At the crux of the recommendations is that there is enough existing evidence to know what steps need to be taken to not only prepare for, but mitigate disasters. Now those steps just need to be taken.

By beginning this movement toward whole-of-community preparation to collectively stop damage that is preventable in Southern California, members of the executive committee hope to pave the way for global disaster risk reduction.

“Throughout the world, some distinct patterns we’ve found illustrate the huge gap between what we’re doing and what we should be doing to preserve our community, regional economy and individual wellbeing,” Smith said.

While also trying to engage the public, the report is meant to inform Southern California’s local governments and business leaders, so that companies and organizations across the region are back up and running in the shortest amount of time after a disaster.

The report is just the beginning of an initiative that will bring together civic and community leaders to develop a thorough understanding of what everyone should be doing before the next natural disaster.

“With this initiative, we want to help build a more resilient Southern California — one where communities across the Southland work hand-in-hand with the government,” Bostic said. “We don’t want to provide abstract suggestions on what needs to be done. Our ultimate goal is comprehensive engagement with local communities, businesses and authorities, so they make the right disaster risk reduction decisions themselves.”

Researchers will create technology giving scientists and engineers the tools to do complex calculations faster than ever.