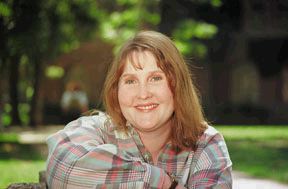 It should come as no surprise that this young scholar has received the university’s highest student honor – after all, she’s enthralled by learning and she just did what she loved.

WHEN THIS YEAR’S valedictorian was a junior, she met with skepticism about her plan to challenge a renowned economist and philosopher.

Mark Kann, a political science professor, recalled telling this to Heather Zachary: “If you want to spend the rest of your time working on this, that’s fine, but we only have one semester.”

But within a semester, the political science major had handily refuted Max Weber’s theory that Catholicism gives rise to authoritarianism while Protestantism gives rise to democracy with a 150-page comparative analysis that explored Bismarck’s Germany and colonial Brazil.

“I’ve been at USC for 23 years, and it’s probably the best [thesis] I’ve seen by an undergraduate,” Kann said.

The episode, according to Zachary’s thesis adviser, speaks volumes about how she rose to the top of her class.

Indeed, Zachary is graduating with a 4.0 GPA from USC’s arduous Thematic Option program. She is one of 10 or so seniors from her department’s graduating class of 160 who are expected to graduate with honors, a distinction that requires a thesis. Hers was two to three times longer than most. Meanwhile, she poured nearly as much of herself into other courses, campus activities and volunteerism.

“I didn’t try for it,” Zachary said of being named valedictorian. “I just did what I love.”

The Vancouver, Wash., native who attended USC on a prestigious Trustee Scholarship can remember being captivated as a 7-year-old by the 1984 presidential campaign.

“I was fascinated with politics, but thought I was more interested in campaigns and how people get into office,” Zachary said. “But at USC, I realized that you need a framework for how elections work and why even to have elections.”

THE DAUGHTER OF a river pilot and a former elementary school teacher now considers political theory her chief passion, although she also threw herself into a wide range of other subjects at USC, including classics, religion, anthropology, neuroscience and physics.

“Whatever I’m learning, I’m pretty much enthralled by it,” Zachary said. “When I take a physics class, I end up thinking, ‘I want to be a physicist.’ I don’t go, ‘I hope I can finish this GE requirement, so I can get back to poli sci.”

ZACHARY’S ZEAL FOR breadth probably didn’t set well with other competitors in all-university college bowl competitions in which she placed second as a freshman and third as a sophomore. But by following her interests, Zachary ended up completing a minor in law and society. The approach also led her to study British political history and the philosophy of science at the University of Cambridge during the summer of her sophomore year.

In addition to excelling in academics, Zachary plunged into campus activities. She affiliated with seven honor societies and two religious groups, served on two committees in the Student Senate and participated for three years in Trojan Democrats. As secretary and president of USC’s Undergraduate Political Science Association, she helped select speakers for the department’s satellite commencement ceremonies and represented fellow political science majors at faculty meetings.

“Some people are intimidated by faculty, but Heather was really poised,” said Alison Dundes Renteln, an associate professor of political science. “Even as a sophomore, she always raised issues on campus. I was impressed.”

CAMPUS ACTIVITIES, in turn, opened the door to volunteer opportunities in the community, Zachary said. Highlights of her five-page resume include interning as a sophomore for state Sen. Betty Karnette’s campaign and as a junior for the Clinton-Gore re-election campaign. She also participated in a wetlands clean-up campaign, worked on several voter-registration drives, participated in a community environmental forum with state Sen. Tom Hayden and participated in such short-term volunteer efforts as counseling seventh-graders on how to get into college. Along the way, the 21-year-old found that her career aspirations had risen.

“I came to USC thinking I would end up as a researcher in a think tank, or perhaps a research-oriented professor with little contact outside the academic world,” Zachary said. “My work with the poor and alienated in the community … has led me to a more activist position. I now feel a passionate need to change lives firsthand.”

ACCEPTED AT ALL 10 of the law schools to which she applied, Zachary next fall will attend her first choice: Yale Law School. When she graduates from there, she would like to work for international human rights.

“When I started thinking about graduate school, I realized that community involvement is essential to who I am,” she said. “I see international human rights as community service on a global scale.”